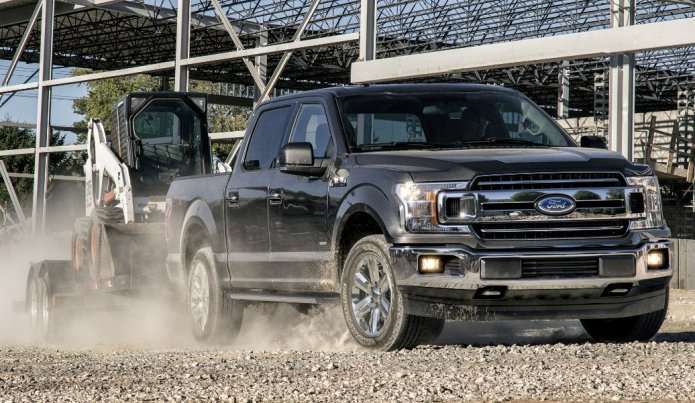 We learned last month that the 2018 Ford F150 would be getting a new entry level V6 engine, more power in some of the existing engines and broader availability of the 10-speed automatic transmission. It was expected that the adding power to the 2018 F150 would lead to improved working capabilities and that the introduction of the 10-speed automatic transmission with more engines would lead to improved fuel economy – all of which is true. As a result, the 2018 Ford F150 offers the highest payload capacity of any half ton truck, the highest towing capacity of any half ton truck and the best fuel economy figures of any gasoline-powered half ton truck.

“The Ford F-150 lineup again delivers on its promise to give full-size truck customers even more value, functionality and smart technology innovations, with engines with best-in-class towing, payload and fuel economy,” said Todd Eckert, Ford truck group marketing manager. “Our new F-150 highlights Ford’s commitment to its hardworking truck customers and how we listen to their demands for their new F-150 to be even tougher, even smarter and even more capable for work and play.”

The Best Gasoline Fuel Economy
The 2018 Ford F150 with the 2.7L EcoBoost V6, the 10-speed automatic transmission and rear wheel drive has received official EPA ratings of 20 miles per gallon in the city, 26mpg on the highway and 22mpg combined, making it the most efficient gas-powered half ton truck in America. The 2018 F150 takes that title away from the 2017 F150 with the same engine and the old 6-speed automatic transmission, which offered the same highway and combined numbers, but 1mpg less around town.

It should be noted that the Ram 1500 EcoDiesel offers better fuel economy numbers than the F150 with the 2.7L EcoBoost, but with Ford’s plans to roll out a new 3.0L half ton diesel truck of their own later this year – we can expect that Ford will also take a run at the diesel-powered half ton segment title as well.

The Best Payload Capacity
Next, the 2018 Ford F150 claims the title of the highest payload capacity in the half ton truck segment with its ability to haul 3,270 pounds when equipped with the 5.0L V8. For 2018, the only V8 in the F150 lineup gets 10 more horsepower and 13 more lb-ft of torque along with being paired with the 10-speed automatic transmission. As a result, the 5.0L V8 F150 is more powerful and more efficient, but most importantly, it can haul more in the bed than any other half ton truck in America.

In addition to the engines mentioned above, the 2018 Ford F150 will be offered with a new 3.3L V6 base engine with more power, more torque and better fuel economy numbers along with a new 3.0L PowerStroke diesel which will likely rival the Ram EcoDiesel in every possible category.

The 2018 Ford F150 will arrive this fall with all but the new diesel option, with that arrival at a later date.