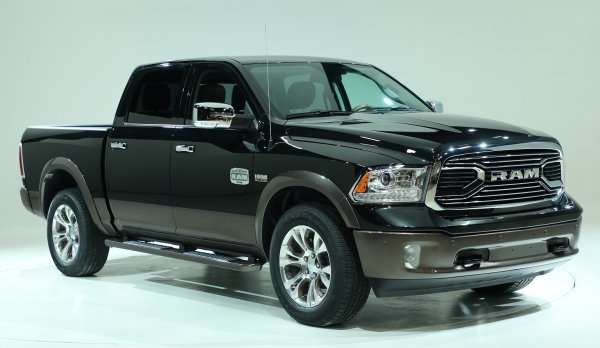 This morning at the Dallas Auto Show, FCA’s Ram Truck brand announced that starting later this year, trucks finished with the Laramie Longhorn package will get a new two-tone exterior look – with the White Gold found along the bottom of the trucks being replaced by a new dark brown with a fairly strange name.
Advertisement

Across the Ram Trucks lineup – including the 1500, 2500 and 3500 – the Laramie Longhorn is one of the most luxurious packages available, with only the Limited package offering a more premium layout. The key focus of the Laramie Longhorn package is a western theme, with unique badging, all of the premium amenities that you could ask for in a modern luxury truck and a two-tone color scheme inside and out.

For the later portion of the 2017 model year, the Ram Laramie Longhorn in 1500, 2500 and 3500 form will all benefit from a new exterior color in its two-tone configurations, with RV Match Brown replacing the White Gold paint used along the bottom of the current Laramie Longhorn trucks with the two-tone layout.

“The Ram Laramie Longhorn has deservedly become the world’s benchmark for upscale, capable pickup trucks,” said Mike Manley, Head of Ram Brand, FCA – Global. “The Laramie Longhorn has earned the title Luxury Truck of Texas from the Texas Auto Writers Association and there’s no better place to show off these updates than at the Dallas Auto Show.”

New Two-Tone Laramie Longhorn
The Ram Laramie Longhorn package doesn’t change much for the 2017 model year, but starting in the second quarter (sometime between April and June), the two-tone exterior paint packages for the Longhorn trucks will transition from having White Gold along the bottom of the trucks to a new RV Match Brown.

Yes, it seems that they are actually calling this color RV Match Brown, so perhaps the “fun name people” were on vacation when this new exterior hue was named – but that unusual name makes it clear what the Ram team is looking to do with this new paint.

Since the Ram Laramie Longhorn is only offered with Hemi V8 engines or the Cummins Turbo Diesel, so in addition to being among the most luxurious trucks on sale today – they are also among the most capable. That capability makes the Ram Laramie Longhorn a popular choice among those folks looking to pull big trailers and in the world of towing – there are few trailers which are bigger or more uniquely designed than large RV trailers. Many of the modern “campers” have splash style graphics on the side and it seems that in almost every one of these designs – there is a heavy dose of brown.

In adding this new RV Match Brown to the 2017 Ram Laramie Longhorn package, those folks who are looking to buy a new Ram 1500, 2500 or 3500 will more effectively be able to match the color of their truck to their recreational vehicles…hence the name. More importantly, this new brown in the two-tone theme presents a proper premium look for those folks who aren’t looking for an RV-hauler so much as they want a great-looking luxury truck.

Finally, in addition to the Ram Laramie Longhorn getting the new lower color in two-tone form, the Ram Laramie package will also be available with RV Match Brown, but the Silver lower portion will continue to be offered for the lower-priced package.