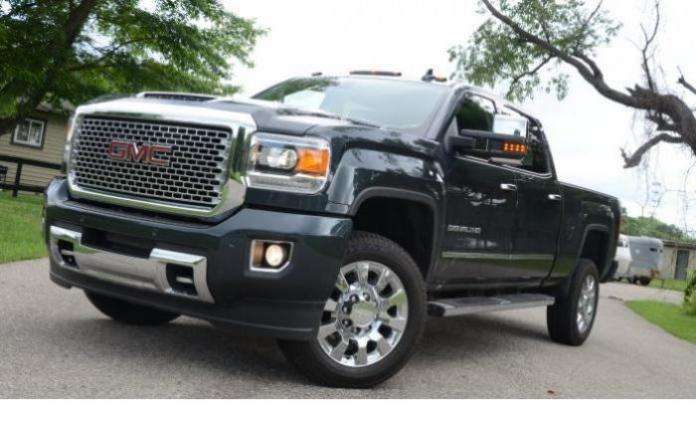 The 2017 GMC Sierra 2500 Denali might be a luxury pickup, but it is still capable of serving as a great work truck and to test the capabilities, I put the loaded ¾-ton pickup through the paces of a weekend-long horse show – allowing me to experience the plush GMC while hauling, towing and providing a comfortable ride home after long days at the show grounds.
Advertisement

There is a perception among people who have never owned a truck that luxury-level trucks can’t serve as good work trucks and as a result, pickups like the 2017 GMC Sierra 2500 Denali really only appeals to people who don’t actually need a truck. I know that is nonsense, but to prove just how well this beautiful ¾-ton pickup will get down and dirty, I used it for a weekend-long horse show. This forced the Sierra 2500 Denali to tow and haul on a variety of road surfaces and as truck owners might expect – the big GMC did a fantastic job even with the premium interior amenities. $70,000 is a whole lot of money for a truck, but when you consider the level of luxury inside and the impressive working capabilities, the price of the 2017 GMC Sierra 2500 Denali is right in line with the rest of the luxury-level, heavy duty pickups on the market today.

Hauling with the Luxury GMC HD
The horse show weekends for the 2017 GMC Sierra 2500 Denali began by loading up the back seat and bed before hooking up the trailer. The back seat holds all of the more delicate items such as the saddles, the clothing my wife wears while competing and other items that we don’t want tumbling around the bed. We buckle the saddles into the rear outboard positions and pack things between and around them. With some trucks – even with the larger cabs – the saddles are effectively squashed against the back of the front seats when the front buckets are adjust for a pair of 6-foot-tall people. On the other hand, the Sierra 2500 Denali had plenty of room for the saddles, with a gap between the items in the back seat and the back of the front seat. That makes it easier to get things in and out, in addition to accepting more cargo than other trucks. Next, we loaded up the bed of the 2017 GMC Sierra 2500 Denali, with a few bales of hay, bags of compressed bedding, bags of grain, buckets and a few other larger items that wouldn’t fit comfortably in the cab – or things that you don’t want stinking up the interior. Even with the smaller of the two cargo bed options, the Sierra 2500 Denali had plenty of room for everything.

Once the bed and cab were loaded up, I had to make a quick trip to the tack store for some last minute items. This gave me a chance to see how the 700lbs of cargo out back impacted the driving dynamics of the 2017 GMC Sierra 2500 Denali. This truck is capable of hauling more than 2,500lbs, so my 700lb load was nothing for this ¾-ton luxury pickup, with no noticeable difference in acceleration, braking or handling.

Denali VS the Horse Trailer
Next, we were ready to load up the horses and hit the road, so I hooked up the 2017 GMC Sierra 2500 Denali so my 2-horse trailer. When loaded, this trailer weighs around 5,500lbs and that is a far cry from the 13,000lb towing capacity of the Sierra 2500 with the Duramax diesel engine. However, I use this exact same trailer for every truck and SUV (with a high enough towing capacity), which allows me to get a feel how each truck pulls the common trailer.

Thanks to the backup camera, hooking up to the trailer was a breeze with a 5 inch drop hitch and the trailer plug is located next to the license plate for easy hook-up. Once we had the trailer connected to the 2017 GMC Sierra 2500 Denali, the loaded the horses and headed out for the horse show. As someone experienced with towing a trailer might guess, the 2017 GMC Sierra 2500 Denali didn’t break a sweat while pulling the two-horse trailer. With 445 horsepower and 910lb-ft of torque, it took very little effort for the Sierra 2500 to get the trailer pulling out from a stop or when merging into faster-moving highway traffic, and when cruising on the highway, even larger hills didn’t require much work from the Duramax engine.

Finally, the last stretch of driving to the horse show is on rough, unpaved roads, but the 2017 GMC Sierra 2500 Denali handled these roads very nicely with the off-road suspension package. Even on the roughest sections, the rear end of the truck was firmly planted and at no point was control compromised.

The Daily Drive
After we got to the showgrounds on that first day, we unloaded the truck, dropped the trailer and parked the 2017 GMC Sierra 2500 Denali as we went on with the normal procedures of a horse show weekend. At the end of a long day, we piled into the truck to head home, at which point we were able to really enjoy the plush cabin of the Denali package. The soft, cooled leather seats kept us both comfortable on the drive home after a long, hot day with the Bose audio system pumping out the tunes. The navigation system was easy to program and recall, so over the course of a few days, we just had to keep picking the saved address to get to the show and back home. When we left early each morning, it was much colder outside, we when headed to the show, we enjoyed the heated seats and steering wheel of the 2017 GMC Sierra 2500 Denali. Once at the show, the temperatures rose and we used the Denali as a sort of mobile living room, keeping us cool throughout the day while some of the competitors napped between rounds in the spacious front and rear seats. It is this point in the test where the plush cabin really comes into play, as a bare-bones Sierra 2500 would pull the trailer and haul our cargo just as well as the Denali, but the luxury features of this premium package make the ride back and forth far more comfortable while also providing a great place to relax during downtime at the horse show. The Sierra 2500 Denali might be a ¾-ton pickup, but the interior layout is nothing short of luxury level, making for one of the most comfortable trucks on the market today.

The Final Word
The 2017 GMC Sierra 2500 Denali might have the interior features of a luxury sedan and lots of polished trim on the outside, but don’t let this pretty package fool you – this truck can work with the best of them. In the case of the horse show test, the Sierra 2500 Denali hauled and tower perfectly and the plush interior was a welcome sight after long days working with the horses. If you want a heavy duty work truck with the interior comforts of a luxury sedan, the 2017 GMC Sierra 2500 Denali is the truck for you.

Cesar wrote on October 19, 2017 - 3:53pm Permalink
The interior of the 2017 GMC Sierra 2500 Denali is the same from 2014 and up. It's really nice, but nothing new. If you wanna talk about great interiors look at the all blackout Ram 2500 limited on or the Ford platinum ones. I wish GM would make some interiors like that in its trucks.