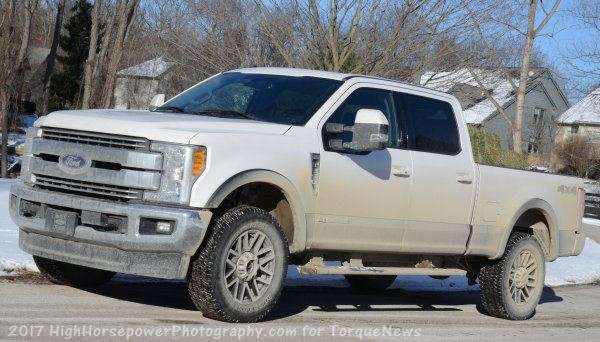 I recently spent a week behind the wheel of the 2017 Ford F250 Super Duty Lariat and while this big, powerful truck performed every task just as well as you might expect – the ride quality from this hard-working truck was far better than any of my passengers could have foreseen.
Advertisement

The new Ford Super Duty lineup is the strongest and toughest on the current market with the 6.7L PowerStroke diesel packing 440 horsepower, 925lb-ft of torque, a 7,630lb payload capacity and a 32,500lb towing capacity when properly equipped. My 2017 F250 Lariat test truck was fitted with that monster PowerStroke diesel engine which leads to a payload capacity of “only” 3,350lbs and a towing capacity of “only” 15,000lbs, so while this F250 isn’t the strongest truck in the Ford lineup – it is still one of the strongest trucks in the ¾-ton segment while also offering far greater capabilities than your average truck owner will ever fully utilize.

Every time I test a new truck or SUV, I put them through a standard set of “farm tests” which puts these vehicles through the paces of everyday work around a stable. I haul a dozen bales of hay (around 700-750lbs), a thousand pounds of bagged horse feed and I tow a 5,000lb, 2-horse trailer, giving me a chance to experience all of these different vehicles in the same basic tests. With my normal towing and hauling tests only reaching about a third of this F250’s capacities, it should come as no surprise that this big truck didn’t break a sweat with these loads. After all, this is a truck engineered to perform the toughest tasks, so of course it is great at being a work truck, but at the end of the day, most of the people who will buy a 2017 F250 Lariat will spend as much time driving the truck without anything in the bed or hooked to the hitch.

Because so many people will use the 2017 Ford F250 for daily driving more often than they will be towing or hauling heavy loads, the Ford team knew that they needed to balance the capabilities of their heavy duty suspension setup with ride quality – and the results are impressive, to say the least.

The Historic Issue with Heavy Duty Trucks
Over the past few years, I have had the pleasure of driving a long list of new trucks, including all of the entries from the American ¾-ton and 1-ton class. These trucks, including the Ford F250/F350, the Chevrolet Silverado 2500HD/3500HD and the Ram 2500/3500, are all engineered to be the hardest working vehicles in the consumer grade segment while also being among the most common vehicles in the working world.

If you need a truck that can tow or haul heavy loads day in and day out, these big trucks are the best solution by a long shot, but the problem with these trucks in the past was that the type of heavy duty suspension needed to handle those heavy loads led to a very stiff, rough ride. Because of that, these heavy duty trucks have been less appealing to those who didn’t appreciate their working abilities, but over the past few years, all of the automakers have worked to make their toughest trucks more comfortable.

The 2017 Ford F250 Lariat is a beautiful example of those efforts, as this big, tough truck is smooth enough to draw comments from passengers who spend lots of time in big trucks.

Daily Driving the new Super Duty
During my week in the 2017 Ford F250 Super Duty, I spent time performing tasks around the 50-horse stable which my wife and I manage, including hauling around a load of hay, a load of grain and our loaded 2-horse trailer. The 12 bales of hay and 20 bags of grain were hardly noticeable in the bed, with braking, acceleration and handling being unaffected by the added weight. The 5,000lb horse trailer was a little more taxing on the new F250, but it was clear when pulling my small trailer that this Ford truck was designed to comfortably pull a much heavier load. With this in mind, I would most certainly recommend the 2017 F250 Lariat to anyone who performs similar tasks each day, even if you are towing or hauling heavier loads.

More importantly, I would recommend the 2017 Ford F250 Lariat to someone who needs these capabilities on tap while using the truck for the most basic daily driving activities, because the cabin is beautifully appointed and the ride quality is comparable to much lighter duty pickups.

I noticed this smooth ride as soon as I took to the street with the 2017 Ford F250 when driving around town, but even on Detroit’s rough highways, the new Super Duty offered a remarkably gentle ride. Sure, it is stiffer than your average sedan or crossover, so you do feel the imperfections in the road surface, but the new F250 doesn’t have the rough, abusive ride that you get from so many heavy duty trucks.

I was impressed with the ride quality of the 2017 Ford F250, but I had the ultimate gauge of a smooth ride – my wife when she isn’t feeling well. I picked her up from work early because she was a bit under the weather and when I showed up in the new F250, she was clearly not in the best of moods. The drive home entailed some highway time followed by local roads, some of which are not paved, so we were on rough roads with a truck from a class known for being particularly harsh in terms of ride quality. However, as we neared home, my wife mentioned how impressed she was with the smoothness of the new Super Duty, pointing out that it felt as smooth from the passenger’s seat as many of the smaller trucks I have tested in the past few years.

After passing the “sick wife ride quality test”, the 2017 Ford F250 might as well have been handed an award, but I wanted to get the input of a few more people. I found reasons to pick up a few of my truck-owning friends for short rides around town and in most cases, they commented on the ride quality without my asking and in the few cases where I had to ask what they thought – they all praised the smooth ride of the new F250. Included in this group of passengers were two F250 owners, both of whom believed that this new, heavier duty Ford truck offered superior ride quality to their own Ford trucks.

The Final Word
The 2017 Ford F250 Lariat Super Duty is one of the toughest, strongest and hardest-working trucks sold in America, but unlike past heavy duty pickups, this new Super Duty offers a smoother ride for daily driving. The Ford engineers worked hard to make the new F250 the most capable ever, but at the same time, they made a new F250 which is more comfortable when being subjected to the most common task performed by truck owners – daily driving.

The 2017 F250 is a great work truck and it always has been, but the newest version of Ford’s ¾-ton truck also offers the most impressive ride quality both on- and off-road – making this a great option for someone who wants a hard-working truck that can be driven daily in comfort.

Steve wrote on March 14, 2017 - 2:36pm Permalink
Pat, I believe this is perhaps the best test of a full size truck I have ever read.
lance wrote on March 13, 2018 - 9:14pm Permalink
Nice review! I couldn't agree more from the test driving I've done on the 2017 and 2018 F250-F350 models. They do provide a noticeably more comfortable ride than the competition.
Douglas Dingman wrote on May 1, 2018 - 8:50pm Permalink
I own that very 2017 F250 Model and it is the worst riding truck I've ever owned. Driving down a concrete highway you can't even talk because it jolts on every concrete segment. It sound like someone pounding you on the back when you speak. I feel every small bump I go over....Not sure if this is because they put nitrogen in the tires or not..I don't think it was like that for the week I had it prior to the nitrogen, but man it is not a smooth ride. I love everything else about the truck...just not the ride.
Anne Sheeler wrote on June 6, 2018 - 9:54am Permalink
We purchased a 2017 F-250 XLT. This was our first F250 we've ever owned We just returned from an 800 mile trip and it did not go well. Yes, we love the truck and it's ability to pull the camper, but I don't know if I am going to be able to take this constant bumping and bouncing around the entire time. I came on this forum hoping to find a way to maybe make some adjustments to the truck to make it less rough. Time will tell if we can keep it.
Dean Elliott wrote on September 29, 2018 - 7:36am Permalink
Try some Sulastic Shackles for the truck you will then have much better ride unloaded. As for the exact bumping and bouncing it might be the camper has the problem, the camper would be much improved with shocks and insure the axels are in alignment with the pin box or tongue. Look at Joyrider rv shocks. look to tweetys rv for the kit.
Dano wrote on February 10, 2019 - 4:18pm Permalink
The Lariat (and XLT in my case) has 3 suspension package upgrades that would make daily driving rough, shaky, bouncy, you name it. Can we please do reviews and list the exact specifications of the truck? Then offer opinions based on the exact specifications of our own trucks? Then draw a comparison as to why 1 person says 1 thing, and another person claims they have "the exact same truck" and states the polar opposite opinion on ride quality. Is it because you are not driving the exact same truck? The Camper Package, the Heavy Service Front Suspension Package, and the Snow Prep Package, not to mention the combo Camper Snow Prep Package all play a serious role in ride quality when not hauling\towing\plowing or whatever. All of these Packages add heavier front coil rates and stiffer rear spring rates so when running empty with just 2 people,with all those stiff suspension "upgrades," one can deduce that the truck its going to ride like complete ****. Up north, every dealer orders their F250 with these suspension "upgrades" which for non work truck people, creates some serious dissatisfaction with the ride quality. Drive the exact same F250 without any of these upgrades in the exact same configuration, and then report back on the ride quality. Include the technical parameters people!
BC Houston wrote on June 29, 2019 - 10:04am Permalink
As I read this I was shocked. As many of the others have noted, this truck ( 2017 F250) is the worst riding truck I have ever driven, by far. I just returned from a 3 hour highway trim that included my to college age sons. Both who encouraged me to purchase this truck. After the trip, both boys said, How do you drive this thing every day? That is was ridiculous how you can feel every line in the road even on the highway. Both boys are Ford truck owners. Both said, Get ride of this thing! ( The ride is That bad!) Regardless of others comments that there are other configurations that ride better.... When you spend $70k for a King Ranch, like so many other vehicles on the road, these trucks should have "select" ride options that stiffen the ride when needed for trailering, and selection for acceptable ride when not. The Lincoln, and most other high end SUVs have this, King Ranch and Platinum options should at least offer this as an option or package. Point is, most everyone I have spoken to, and in Houston the F250 is driven by Many, said they too have a TERRIBLE RIDE. I will be selling the truck soon.