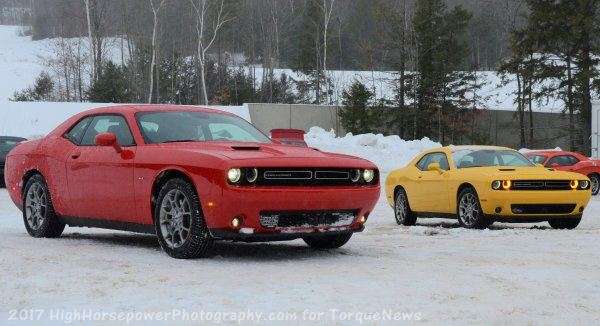 I recently had a chance to spend a day driving the 2017 Dodge Challenger GT – America’s first 2-door muscle car with all-wheel drive – around snowy New England to see if FCA could really build an AWD muscle car that maintains the properties which has made the brawny Mopar muscle car so popular.
Advertisement

The modern Dodge Challenger has proven to be popular with buyers for its muscle exterior design and its roomy, plush interior. In the R/T and SRT models, the Hemi V8 engines have helped make these modern muscle cars popular with horsepower junkies, but as is the case with all of the American muscle cars, the V6 models are the bestselling.

The popularity of the V6 Challenger led Dodge to design the all-wheel drive GT package around that base engine, as this is an all-year cruiser for those who live in areas which get snowy winters – not a high performance track car offering the best grip possible. However, even with the V6 Challenger, buyers want that muscle car feel, so I was curious to see if the AWD Challenger GT preserved the feel of the rest of the lineup.

It turns out that the 2017 Dodge Challenger GT feels a great deal like the rear-drive Challenger SXT, except with a more heavily appointed interior and an all-wheel drive system that makes this muscle car a real beast in the snow.

When designing the 2017 Dodge Challenger GT, FCA wanted to build a car which would appeal the most to those buyers who need a car which they can drive year-round, including when the snow begins to fall. The rear-drive Challenger is less than ideal for driving in snowy conditions and for that reason, many Challenger owners who have to deal with snow buy a winter vehicle.

For those people, Dodge has introduced the 2017 Challenger GT with standard all-wheel drive. This first-ever AWD 2-door muscle car could serve as the perfect year-round vehicle for someone looking at the Challenger SXT, or for those Hemi-powered Challenger owners who drive something with AWD when the snow falls – this could be the perfect second vehicle.

V6 Power, Rear Drive Feel
While the Pentastar V6 “only” offers 305 horsepower, that engine provides enough power to help the AWD Challenger GT get up and go. When launching from a stop, it feels like a rear-wheel drive car and while it doesn’t accelerate as hard as the Hemi Challengers – it still moves out quickly enough to be fun to drive. If you truly demand the power of a Hemi V8, you will need to settle for rear wheel drive, but if you are more focused on getting around in any weather than being the quickest on the street – the Pentastar makes the Challenger GT a fun driver.

More importantly, in addition to offering 305 horsepower, the AWD Dodge Challenger GT maintains the rear-drive feel that buyers expect from a car like this. The all-wheel drive system engages automatically via a handful of different inputs. First, if the outside temperature drops below freezing, the AWD system remains engaged the majority of the time. Next, if the windshield wipers are on, the AWD system is engaged and when Sport mode is activated, AWD stays engaged as well. Finally, when driving in any other condition (warm day, wipers off, Sport mode off), the AWD system engages anytime the wheel speed sensors detect slippage.

I drove the 2017 Dodge Challenger GT from Portland, Maine to Club Motorsports in northern New Hampshire during the tail end of a fairly heavy snowstorm. We got about 6 inches before the drive and another couple of inches fell during the day while we were driving. Because of this, we had the wipers on most of the time and since we were always in freezing temperatures, the AWD system was engaged the entire time. Even with the system in AWD mode the entire time, the Challenger GT still has the feel of a rear drive car. While driving on the wet highways, stomping on the throttle presented the rear-drive pull that you want, even with the AWD system engaged.

This is possible due to the active AWD system transitioning power between the front and rear wheels as the extra grip is needed. When driving in a situation where extra grip isn’t needed as much, the majority of the power is sent to the rear wheels, but when we got to the snowy roads, the Challenger GT sends more power to the front wheels for better grip. Also, when traveling on the heavily snow-covered roads, goosing the throttle kicks the back end out just like it would with a rear-drive Challenger, but the AWD GT has the extra front grip to right the car whenever you get the back end a little too far out.

More importantly, in addition to offering the RWD feel during normal driving conditions, the all-wheel drive system made the 2017 Dodge Challenger GT unstoppable on the snowy roads of Maine and New Hampshire. We spent several hours driving around in the snow and in more rural areas, we drove a great many miles on roads which hadn’t been well cleared – if they had been cleared at all. The only vehicles on the road were AWD SUVs and 4WD pickups, and the narrow backcountry roads of New Hampshire had portions which would have been impassable for a RWD Challenger. However, even on steep uphill grades with deep snow on the road, the Challenger GT with the standard all-season tires made short work of the trip through New England.

Once we got to Club Motorsports, we got to take the AWD Challenger GT onto an autocross track buried in snow and as the snow continued to fall all day, the track crew kept packing the snow down rather than clearing it. This allowed us to take the AWD muscle car around a snow covered track and push it to its limits, giving us the chance to see just how crazy you can get with the Challenger GT in a safe venue. There was a Mustang and Camaro available for us to drive as well, and after digging it out of the snow, you had to baby both of them around the track with their rear-drive setup. On the other hand, you could drive the Challenger GT as hard as you wanted around the small, tight track – kicking the back end out in the turns with the ability to pull it back together with the advance AWD system. Once again, this Challenger has the physical feel of a rear wheel drive car, even with the AWD system engaged.

Same Great Looks, Even Greater Interior
in addition to the ultra-capable driving capabilities, the 2017 Dodge Challenger GT has the same great exterior appearance as the rest of the Challenger lineup, including the LED trimmed headlights and the LED taillights. The AWD system does force this Challenger to sit a touch higher than the non-AWD models, but it still has that proper muscle car look. The Challenger GT package also adds unique fender badging, a low profile rear spoiler, fog lights and the unique wheels seen in the picture above.

Overall, the 2015+ Dodge Challenger V6 models have benefitted from a handful of styling cues shared with the Hemi models, and the new Challenger GT follows that path. Sitting still, it is hard to identify this is a V6 Challenger, and that makes it more attractive to buyers who like the modern muscular look.

On the inside, the Challenger GT has the most elaborate layout of any V6 Challenger in the modern era. This includes the heated, leather SRT sport seats, a heated steering wheel with paddle shifters and the premium 8.4 inch UConnect infotainment system with a 6-speaker, 276-watt sound system. There is also a 9-speaker system that you can get as part of the GT Interior Package or an 18-speaker premium Harmon Kardon sound system, but even with the base system – the Challenger GT has a high end feel. While spending the day cruising around frigid Maine and New Hampshire, the heated seats and heated steering wheel kept me nice and warm.

The Final Word
If you are looking for a 2-door car that you can drive year round in snowy areas that is fun to drive in any condition – with a loaded interior and a muscular design – there is no better option for the money than the Dodge Challenger GT. The only other AWD coupes with these premium amenities are found in the far more expensive luxury segment, so for a car that starts well under $40k, this car is the best “winter coupe” on the market today.

John Goreham, a native New Englander, also spent some time behind the wheel of the Challenger GT and you can check out his take on the new Dodge muscle car as a Grand Touring car by clicking here.