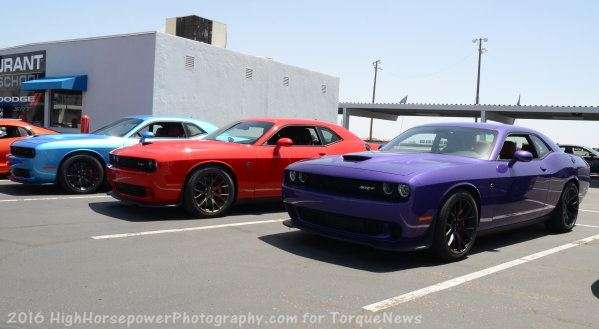 2017 Dodge Challenger Could Get New Colors, Another Trimline

There hasn’t been any official information offered up for the 2017 Dodge Challenger just yet, but insider information from the folks at Hellcat.org suggests that this new model year will be getting a handful of new colors, a new infotainment interface and a new “special edition” trimline.
Advertisement

Before getting into the latest insider information on the 2017 Dodge Challenger, I want to clarify where this information has originated. All of this information was originally posted on the enthusiast forum Hellcat.org and this is a site which I have sourced in the past, but in the past – I have gotten some disgruntled emails about my using a source that doesn’t explain where they got their information. Understandably, the crew at that site isn’t too keen on revealing the source of their information, but in speaking with a handful of active members, I have been assured that one of the guys behind the curtain is an FCA employee with access to this inside information. Furthermore, when I reached out to some of my own insiders, they confirmed that they believe the "tentative" information posted on Hellcat.org to be accurate.

So, while some will slight this 2017 Dodge Challenger information because it “comes from a forum”, it seems very likely that this forum information has been supplied by an unnamed employee of the company. As some of the unpleasant commenters have pointed out in the past, not everything that comes from insiders proves to be true in the long run, but for the sake of discussion, I bring you the latest – albeit technically unofficial – information on the 2017 Dodge Challenger.

No Drivetrain or Trimline Changes at First
First and foremost, amidst the constant comments that engines are being added or removed from the lineup, it appears as though the 2017 Dodge Challenger will continue on with the same quartet of engines – including the 3.6LM Pentastar V6, the 5.7L Hemi V8, the 6.4L Hemi V8 and the 6.2L supercharged Hellcat Hemi V8. The three Hemi V8s should continue on with the buyer’s choice of a 6-speed manual or the 8-speed automatic while V6 buyers will all get the automatic.

Next, it appears that every trimline from the 2016 Dodge Challenger will continue on for the new model year, with the SXT, R/T, R/T Scat Pack, SRT 392 and SRT Hellcat – along with the Shaker models for the R/T and Scat Pack models and the “Plus” models for the SXT and R/T Challengers.

New Features for 2017
Not surprisingly, there are very few real changes slated for the 2017 Challenger according to the inside information from Hellcat.org, but it sounds as though the new model year for the mighty Mopar muscle car will get an updated version of the Chrysler UConnect infotainment system with Apple CarPlay and Android Auto compatibility.

Next, the insider expects that there will be four new exterior colors offered during the 2017 model year run for the Challenger, including Ceramic Grey, Green Go, Velvet Red Pearl Coat and Yellow Jacket. If I had to guess – and I will – I would expect that Ceramic Grey and Velvet Red will be normal production colors while Green Go and Yellow Jacket will likely be limited edition “high impact” colors, like Go ManGo and Plum Crazy from the 2016 model year.

Finally, the Hellcat.org information suggests that there will be a “special edition” Challenger coming later on in the production run. There is no additional information on this mysterious package, but with another refresh reportedly in the works for the Challenger, this 2017 special edition model could be something like a final run edition of the current Challenger – or it could be something totally out of left field. Unfortunately, with no more information on this new model, the possibilities are limitless.

Should any other information on the 2017 Dodge Challenger pop up, can be sure to find it here at TorqueNews.com.

Monte wrote on July 22, 2016 - 8:45pm Permalink
Interested in the 2017 Challenger colors or changes and if there is anything about a Barracuda.
steve foerster wrote on July 25, 2016 - 12:26pm Permalink
when does the 2017 Manufacturers suggested retail price list come out.
Ed Marinaccio wrote on August 2, 2016 - 10:36am Permalink
In the 70's Plymouth connected with Warner Brothers to use the Road Runner image on their Plymouth In 2017 they should take the new "Sublime Green" on the challenger and team up with Monster beverage and call it "Monster Green" would be an awesome name/color for SRT or Hell Cat..
norm isherwood wrote on September 26, 2016 - 8:45am Permalink
will they offer plum crazy pearl for 2017
monte christman wrote on September 26, 2016 - 7:09pm Permalink
Will there be a chrome or polish wheel and bigger back tires for hellcats.