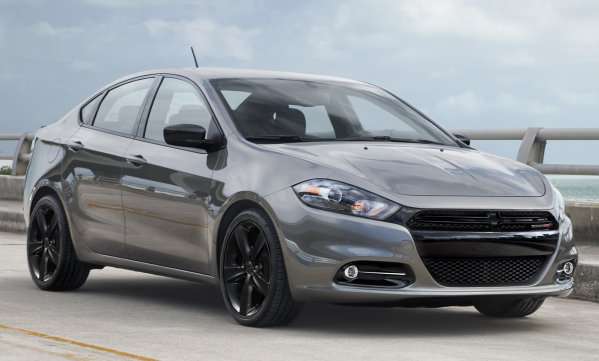 The Chrysler Group has remodeled the trimline lineup for the 2016 Dodge Dart, reducing the sporty compact sedan to just three models and applying pretty significant price reductions to the two “old” trimlines being carried over to this new layout.
Advertisement

Since FCA boss Sergio Marchionne stated that the Dodge Dart may not see a next generation, sales of the sporty compact sedan quickly hit the skids. Dart sales weren’t great before, but since the news surfaced that the Dart might be nearing the end of the line, sales have gotten much worse. Mind you, the company is reportedly working on a partnership where another company’s factory would build a small car for Dodge which may or may not be called the Dart – but at the end of the day, things aren’t looking good for the Dodge Dart.

In order to help improve Dodge Dart sales, the Chrysler Group has revamped the available trimlines, cutting from five to just three, keeping two of the current trimlines and adding one new option.

The 2016 Dodge Dart
If you check in to Dodge.com right now and “build” a 2016 Dodge Dart, you are given the option of five different trimlines – SE, SXT, Aero, GT and Limited. SE is a base model, SXT a “value model” with lots of the more basic modern amenities, Aero is a fuel economy model, GT is a sporty model and Limited is a premium model will all of the fanciest goodies. The SE comes with the 2.0L Tigershark engine and the Aero comes with the 1.4L turbocharged engine. The SXT, GT and Limited all come standard with the 2.4L Tigershark engine and with every trimline/engine option, buyers can pick a manual or automatic transmission. Within each of those trimlines, there are other options which change the overall look and feel of the vehicle, like the Blacktop package and the Rallye package.

In short, the Dodge Dart lineup is intricate and fairly complicated, but that is all about to change. Starting later this month, the Dart will be offered in just three trimlines – SXT Sport, Turbo and GT Sport – and each of those trimlines is built around a specific engine. Below is a quick breakdown of each of these “new” trimlines.

Dart SXT Sport
The new base model Dodge Dart is the SXT Sport package, which is powered by the 2.0L Tigershark 4-cylinder engine that is mated to a 6-speed manual transmission. In addition to 160 horsepower, 148lb-ft of torque and the ability to get 29mpg on the highway, the SXT Sport package includes features like air condition, active grille shutters, a Bluetooth phone system, four wheel disc brakes, a four speaker sound system with USB connectivity and satellite radio, power windows, projection headlights, LED taillights, 16 inch wheels and much more.

This package has an MSRP starting at $17,995 (prices do not include destination), which is $1,400 less expensive than the current Dart SXT.

The car shown above is a Dart SXT Sport with the Blacktop Package.

Dart Turbo
Next up, we have the 2016 Dodge Dart Turbo. As you might have guessed, this model is powered by the 1.4L turbocharged mill, delivering 160 horsepower and 184lb-ft of torque to the front wheels via a manual transmission, along with achieving 41mpg on the highway. The Dart Turbo includes all of the features of the SXT Sport, plus the turbocharged engine, the sport appearance hood, integrated dual exhaust and the Rallye Appearance package, which adds black headlamp bezels, a black grille and 17 inch Granite Crystal aluminum wheels. This new package has an MSRP of just $19,495 and while this is by no means a replacement for the Dart Aero package, the new Turbo package is the best comparison, since only the Aero package could be had with the most efficient engine. The Aero started at $21,095, so the Turbo package gets buyers into the Dart sedans with the most efficient engine for far less cost up front.

Dart GT Sport
Finally, the top of the line package for the 2016 Dodge Dart is the GT Sport trimline. This package comes standard with the 2.4L Tigershark engine with 184hp, 175lb-ft of torque and the ability to get 27mpg on the highway, along with the most extensive list of standard features. Some of them include the sport appearance hood, , Keyless Enter ’n Go with push-button start, 17 inch Granite Crystal aluminum wheels, integrated dual exhaust, a unique front fascia with a black grille, dark tinted headlights, projection fog lights, heated exterior mirrors with courtesy lamps, a power driver’s seat, the premium UConnect infotainment system, a 7 inch reconfigurable gauge cluster, a backup camera, dual zone climate control and much more.