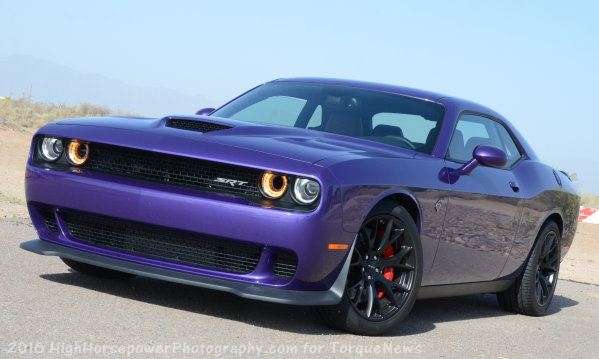 The production information for the 2016 Dodge Challenger SRT Hellcat has been posted on the enthusiast community site Hellcat.org and while they have a ton of statistics on the 707 horsepower muscle car, the key figure is 11,955 Hellcat Challengers sold for 2016 – roughly 67% more than the 2015 model year.
Advertisement

Before getting into the production numbers for the 2016 Dodge Challenger SRT Hellcat, I want to point out that these are not official numbers from FCA. These figures were posted on the enthusiast forum Hellcat.org by the member PLMCRZY and based on that site’s ability to dig up otherwise unknown information, I am inclined to believe these numbers to be accurate. Unfortunately, the Hellcat is a trimline and FCA (and most other automakers) doesn’t break out trimline sales, so it seems that these are the best numbers that we will get.

So, in short, these numbers don’t officially come from FCA, but this is the same source of the unofficial 2015 Hellcat Dodge production numbers that are considered to be accurate.

If nothing else, until some sort of official number surfaces, these numbers are what we have to work with, as was the case after the 2015 model year. Based on these numbers, production of the Hellcat Challenger grew by some 67% for the 2016 model year.

Among those 11,995 Hellcat Challengers built for 2016, 3,944 had the 6-speed manual transmission (33%) while the other 8,051 had the 8-speed automatic transmission (67%). That 2-to-1 ratio of automatics to manuals is pretty big swing from the 2015 model year when the two transmissions had very similar sales, accounting for a ratio closer to 1-to-1.

Surprisingly, Pitch Black was by far the most popular color among the 2016 Dodge Challenger SRT Hellcats, with 3,286 units (27%) coming in that brilliant black hue. Plum Crazy was second with 1,286 units (11%), Bright White was third with 1,103 units (9%), Go Mango was fourth with 1,073 units (9%) and Redline Red rounded out the top five with 1,047 units (9%). The least popular of the twelve exterior colors for the 2016 Hellcat Challenger was Maximum Steel with just 184 units (1.5%), while the Maximum Steel Hellcat Challenger with the 6-speed manual transmission was technically the most limited of the configurations with just 59 units account for just 0.4% of total 2016 Hellcat Challenger production.

Finally, provided that these production numbers for 2015 and 2016 are accurate, FCA has produced 19,163 examples of the Hemi-powered muscle car.

You can check out the rest of the tables over at Hellcat.org by clicking here.