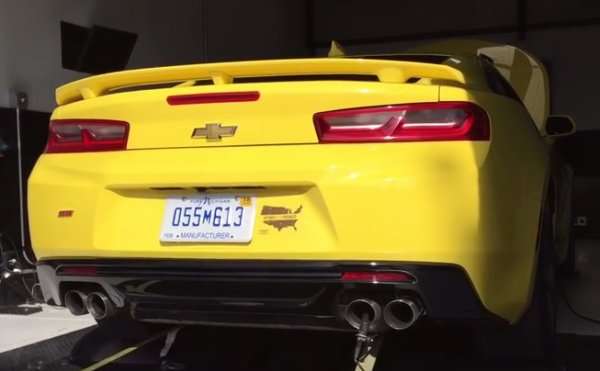 The 2016 Camaro SS Makes Impressive Power on the Dyno (Video)

Over the past two weeks, a fleet of 2016 Chevrolet Camaro coupes have been touring the country as part of GM’s Find New Roads Trip and one of the groups testing the newest Chevy muscle car stopped by a dyno shop with a 2016 Camaro SS – and the LT1 laid down some very impressive numbers.
Advertisement

The 2016 Chevrolet Camaro SS is powered by the same LT1 V8 that was introduced for the 2013 Chevrolet Corvette Stingray. In the Corvette, the LT1 delivers 455 horsepower and 460lb-ft of torque with the standard exhaust while the dual mode performance exhaust lifts the output to 460hp and 465lb-ft of torque. In the 2016 Camaro SS, the LT1 is rated at “only” 455 horsepower and 455lb-ft of torque and while a similar dual mode exhaust system is offered for the Camaro, there is no mention of extra performance coming from the louder exhaust setup.

Since the 2016 Camaro SS was first introduced months ago in Detroit with the 6.2L LT1 V8, fans have been wondering how many of those 455 angry ponies would hit the ground and it turns out that a great many of them make it from the crankshaft to the ground.

First 2016 Camaro SS on the Dyno
So the 2016 Camaro SS makes 455hp and 455lb-ft of torque at the crankshaft, but we all know that wheel horsepower is more important than those rated numbers and because of that, we have all been wondering how much power the Camaro Six will put to the ground. Fortunately, one of the teams partaking in the Find New Roads Trip with a bright yellow 2016 Camaro SS stopped by a dyno shop to see how much power the new LT1 Camaro actually uses and, honestly, the results are very impressive.

The details on this 2016 Chevrolet Camaro SS are limited, but we know that it has the 6-speed manual transmission and we can see that it has the dual mode exhaust system with quad tips.

Those numbers mean that this 2016 Camaro SS is only losing around 9% of its horsepower and around 8% of its torque. Sure, the estimated 15% drivetrain loss figure varies from vehicle to vehicle, but with loss numbers of just 8-9%, this Camaro is definitely laying down more power than we would expect.

Why SO Much Power?
Based on this dyno video, something about the 2016 Chevrolet Camaro SS or the dyno in question isn’t quite right.

This means one of three things:
-This dyno isn’t calibrated properly or the dyno numbers were not “corrected” based on factors like elevation, temperature, etc
-This 2016 Camaro SS is one of the rumored “factory freaks”
-The 2016 Camaro SS is grossly underrated

There is most certainly a chance that the dyno used to test this 2016 Chevrolet Camaro SS was not calibrated correctly or the numbers were not corrected based on atmospheric variables, but it is impossible for us to know whether this was a factor until we see another 2016 Camaro SS at a different dyno shop.

There is the possibility that this Camaro SS is a “factory freak”, or a car that has an engine that makes a fair deal more than the normal production car. There have long been rumors that the media test vehicles have higher power ratings than a production model, but I have never and will never believe that automakers have “special” models with more power built for the media. After all, we will eventually get a production model to test and the company doesn’t want the people testing these cars wondering why one is less impressive than the other.

Finally, there is the possibility that the 2016 Camaro SS LT1 is underrated – and I believe that to be the case here. If we use the 15% drivetrain loss figure and apply that to the wheel horsepower figure of 416 horsepower, this engine is losing around 73.5 horsepower and to make 416whp when losing 73.5hp, the engine needs to be making closer to 490 horsepower.

I don’t think that the 2016 Camaro SS is underrated by 35 horsepower, but I do believe that it is a touch underrated and when more cars hit the dyno – we will find out just how far GM has cut the numbers for marketing purposes.

In the meantime, check out the video of the 2016 Camaro SS on the dyno and make sure that your speakers are cranked up, as the LT1 V8 with the dual mode exhaust sounds incredible at wide open throttle.