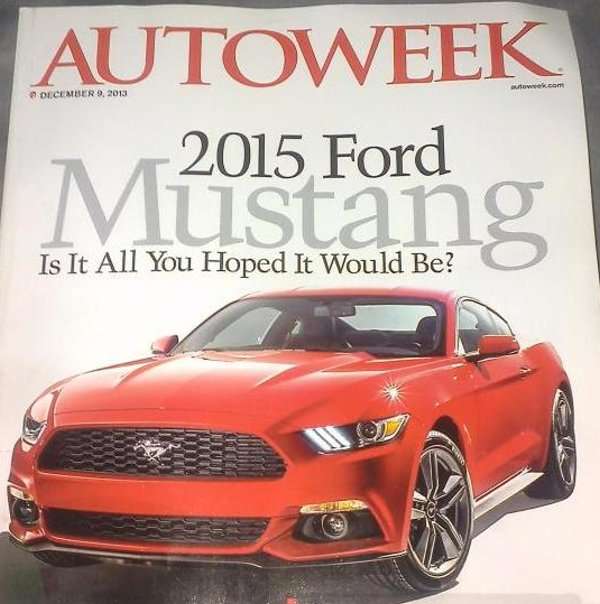 The 2015 Ford Mustang Looks Awesome on the Cover of Autoweek

While Ford Motor Company has gone to pretty impressive lengths to keep the 2015 Ford Mustang under wraps until the global debut this coming Thursday morning, the December 9th copy of Autoweek has let the preverbal cat out of the bag – revealing the next generation Mustang from every angle and killing much of the anticipation around the December 5th debut.
Advertisement

Now, there is that far out chance that the Autoweek images posted on SVTPerformance.com of the 2015 Ford Mustang are not legit. Maybe someone fabricated the images…or maybe Autoweek is just doing what other publications have done, posting renderings under the guise of being production images. However, the member at SVTPerformance doesn’t stand to benefit from making anything up and while these could conceivably be more renderings – these would be the best renderings yet.

What we can see in these images of the December 9th copy of Autoweek is a 2015 Ford Mustang that looks pretty much exactly how we would have expected. Should this be the real deal, the 2015 Mustang looks just how all of the early renderings suggested with a front end that is very clearly styled after the Ford Evos Concept. The “problem” with that (in the opinion of a select, negative few) is that the front end looks too much like the Ford Fusion but with the exception of the headlights, this front end really isnt all that different from what we have seen on the current generation Mustang or previous Shelby GT500 models. The upper and lower grille openings are very similar to the 2014 Mustang in their basic design so if anything, the 2015 Mustang looks like the 2014 Mustang – only with new headlights.

Of course, while the nose of the 2015 Ford Mustang has proven to be the most controversial aspect of the new pony car, the rest of the vehicle has been redesigned as well. Along the sides, the 2015 Mustang is a little curvier than the current models with a shorter roofline and a long rear glass that extends so far towards the back of the car that I really have a hard time NOT calling this a fastback. Out back, the Mustang is vastly restyled but there hardly seems like anything to complain about here with a set of gorgeous, sharply angled tri-bar taillights sitting above a chiseled rear fascia that includes a integrated lower diffuser, a low mounted reverse indicator light and a set of circular exhaust tips.

Honestly, I think that the 2015 Ford Mustang looks great. Do the headlights resemble those on the Fusion? Yes…but only in the sense that they do not resemble the headlights from the current 2014 Mustang. In looking at the car in the picture above, there is no question that this is a Mustang and regardless of similarities between the 2015 Mustang and any other car in the Ford stable – this new Mustang looks great in pictures.

Member Screamin 40th posted a handful of pictures over at SVTPerformance.com and you can check those all out by clicking here. Those who don’t subscribe to Autoweek will only have to wait another day and a half before you can find a full spread of high resolution images of the 2015 Ford Mustang in the flesh – with no speculation as to whether or not they are real.