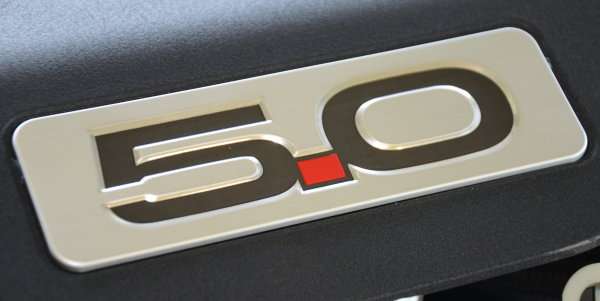 A few weeks back we talked about the first dyno and tuning numbers for the new EcoBoost Mustang and today, we have our first look at the base and tuned dyno numbers for the 2015 Ford Mustang GT – once again from the good people at SCT Performance.
Advertisement

The folks at SCT Performance are planning to be the first to market with hand tuners for the 2015 Ford Mustang in EcoBoost and GT V8 form. Earlier this month, we looked at their work with the new EcoBoost Mustang, with their first tuning efforts with the new turbocharged 4-cylinder adding 35 horsepower and 46lb-ft of torque at the rear wheels (click here for more on the tuned EcoBoost). Those are impressive figures and SCT expects to see even better numbers from their tuners when they hit the market.

While this is all well and good, most hardcore Mustang fans are more interested in what they can expect from their 2015 Ford Mustang GT and fortunately, the SCT is also working on the 5.0L V8 and today we get a look at the results of the initial dyno testing and the early tuning process for the 2015 Mustang GT.

The SCT 2015 Ford Mustang GT
Earlier this month, we brought you the news that SCT Performance had taken their brand new 2015 Ford Mustang GT to the drag strip and ran a best time of 12.86 seconds. Around that time, SCT also put their new Mustang GT on the dyno to see what kind of stock power it was making and the result of that first set of pulls was 361.85 horsepower and 345.39lb-ft of torque at the rear wheels.

Before getting to tuning the 2015 Ford Mustang GT, SCT put the stock car back on the dyno for the sake of consistency and this time around, their new pony car made 360.08 horsepower and 343.8lb-ft of torque at the rear wheels. This is slightly lower than the first numbers and that can be attributed to uncontrollable variables such as the weather conditions during the test sessions.

SCT also took the modification process a touch further, adding a JLT cold air intake setup with their tune and hitting the dyno one more time with their 2015 Ford Mustang GT. The intake setup added an additional 11.85 wheel horsepower and 5.48 wheel torque at peak power for a total output of 396.48 horsepower and 369.8lb-ft of torque at the rear wheels.

In other words, those 2015 Ford Mustang GT owners who swap to the JLT intake and the SCT Performance tune can expect to pack almost 400 wheel horsepower.

Why Less Tuning Gains than the EcoBoost?
I don’t doubt that some people reading this might question why the SCT Performance tuning efforts for the 2015 Ford Mustang GT had less impact on total output than the tune on the EcoBoost engine. I expect that there are two explanations for that.
First, the EcoBoost is designed to be a fuel friendly vehicle that still offers solid performance so in factory stock form, I expect that Ford would have been more conservative with their engine tuning in order to improve fuel economy. On the other hand, the focus of the stock engine tuning for the 2015 Mustang GT would be more aggressive, thus leaving less horsepower for tuners to “find” in stock form.

Second, the EcoBoost engine is (obviously) turbocharged and the 2015 Mustang with forced induction is likely to take to modifications better because – well – it is a whole lot easier to coax power out of a stock forced induction engine than a stock naturally aspirated engine.

While these numbers are strong, I believe that these initial numbers could be improved upon before SCT begins selling the tuning packages for the 2015 Ford Mustang and based on the tuning company’s comments – they are expecting at least a little more power as well.

Jonathan wrote on January 3, 2015 - 9:46pm Permalink
For the 2015 gt, would I be able to include a performance chip even with a tune. Also with the jlt intake, the sct tune, exhaust such as headers, x pipe, and catback, and finally with a performance chip, do you think I would be able to increase hp by 100 at the engine Thanks for any advice
josh wrote on January 28, 2015 - 7:54am Permalink
The tune by SCT tunes the computer. What the "Performance Chips" of the 90's did before the modern times. Chips are a thing of the past as all tuners use the OBD ports to upload the tune to the computer. With intake, long tube headers, x pipe and a cat back i would guess you would be in the ball park of 420WHP Peak. Tho you will pick up more than 20HP in certain areas and adding these extras with a tune will help to flatten the hp and torque curve due to increase performance.