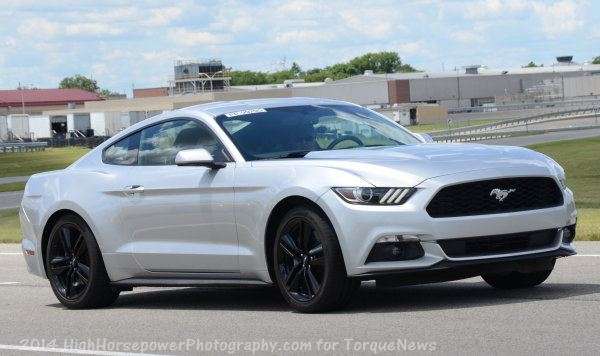 The 2015 Ford Mustang EcoBoost Hits the Dyno, Gets Extra Power

The 2015 Ford Mustang EcoBoost will be sold around the world, serving as the base model in countries where the Mustang V6 isnt offered. While it will also be the most fuel friendly of the new generation pony cars, it is also important for Ford Motor Company to get solid power levels out of the first 4-cylinder Mustang since the early 90s. Ford lists the EcoBoost Mustang as having 310 horsepower and 320lb-ft of torque when running on premium fuel, but how much does it actually put to the ground?

Thanks to the folks at SCT Performance, we know how much the new turbocharged Mustang will put to the rear wheels. We also learn how much extra power EcoBoost Mustang owners can pick up with a tune from SCT.

The 2015 Mustang EcoBoost Power
When fitted with the 6-speed manual transmission, the 2015 Ford Mustang EcoBoost sends 231.71 horsepower and 288.24lb-ft of torque to the rear wheels in bone stock form. Yes, that horsepower number does seem incredibly low to me, too. If that is truly the peak horsepower, it means that the EcoBoost/manual transmission drivetrain loses about 25% of its power between the engine and the wheels. That would be extreme, so I suspect that these dyno numbers are focusing on the incredible torque output and when we talked about the Mustang GT power numbers earlier this week, we saw that the gear with the biggest torque number had lower horsepower figures. That could be the same case here.

Far more importantly, the 2015 Ford Mustang EcoBoost on the SCT dyno put down 288.43lb-ft of torque to the rear wheels and when you look at the stock engine rating of 320lb-ft, the EcoBoost is only “losing” less than 10% of its torque on the way to the wheels. That is a great number and a torque figure like that is why the EcoBoost Mustang performs so well.

I would expect to see some better factory horsepower numbers for the EcoBoost Mustang, but that torque figure is a real winner.

SCT Performance Adds More Power
In addition to dyno testing the 2015 Ford Mustang EcoBoost, SCT took their first shot at tuning the turbocharged 4-cylinder for some extra power. With what the tuning company called a very mild tune, they were able to pick up a touch over 35 horsepower and 46lb-ft of torque – giving the first tuned turbo 2015 Mustang a rear wheel output of 266 horsepower and 334lb-ft of torque. Those are very solid gains for an early tune, as we will almost certainly see bigger gains as the SCT team gets a chance to play with the tuning process.

So a big thumbs up to SCT Performance for offering up the first 2015 Ford Mustang EcoBoost dyno numbers. I cant wait to see what they come up with as far as tuning packages for all of the next gen Mustangs.

Jack Rose wrote on October 10, 2014 - 11:32am Permalink
That's great, any idea how much the tune changes the 0-60 time?
Patrick Rall wrote on October 10, 2014 - 2:35pm Permalink
They have not announced how much the added power will improve real world performance numbers. Those will come along once the tuning company has finalized their products and tested them.
Steven Kenniff wrote on November 23, 2014 - 9:08pm Permalink
Horsepower is a calculation based on Torque output and RPM. It's great to see the torque output being healthy at the wheels, but the reason for the low peak wheel horsepower has to be that the power band falls off in the higher RPM range. Based on other dyno numbers that have since come out, it is apparent that the Ecoboost engine in Stock form suffers greatly at the higher rpm ranges. Heat plays a factor in scaling back the stock tune in a major way, and may have contributed to the numbers here. my guess is that they did a traditional 4th gear pull, and that by the time that engine got its RPMs towards red line the motor was thoroughly heat soaked and pulling all kinds of power out of the tune.