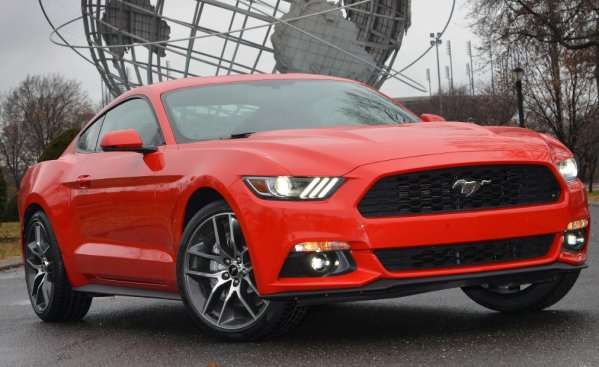 While we only have leaked pricing for the 2015 Ford Mustang EcoBoost models, those unofficial numbers seem like a solid enough deal that most buyers considering the base V6 or the more powerful and more efficient EcoBoost turbocharged 4-cylinder will opt for the slightly pricier yet much more impressive EcoBoost Mustang.
Advertisement

The 2015 Ford Mustang V6 fastback with the 6-speed manual transmission starts at $24,425 including destination, which makes the next generation Mustang less expensive in base form than the current Chevrolet Camaro that starts at $24,550. This new price is $1,090 more than the current base model Mustang, but when you consider all of the changes made to the entire model lineup for the 2015 model year it is a relatively small price hike. Ultimately, so long as it is even a little less expensive than the base Camaro, there are bragging rights to be had.

According to the leaked pricing tables, the 2015 Ford Mustang EcoBoost starts at $25,995. This price for the S550 Mustang powered by the new 2.3L 4-cylinder EcoBoost engine represents a markup of $1,570 over the base V6 model. The clearest difference between the two engines right now is that the 3.7L V6 is promised to offer at least 300 horsepower and 270lb-ft while the turbocharged 2.3L mill is promised to pack at least 305 horsepower and 300lb-ft of torque. While the horsepower advantage is very minor, the extra ponies combined with the significant increase in torque should make the EcoBoost Mustang a great deal more engaging to drive than the V6 models.

There is also the strong likelihood that the 2015 EcoBoost Mustang will be significantly more fuel efficient than the current and future V6 Mustang. The V6 mated to the manual transmission yields numbers of 19mpg around town, 29mpg on the highway and 22mpg combined while the automatic transmission improves the highway figure to 31mpg and the combined number climbs to 23mpg. I would imagine that Ford is hoping to hit at least 30 miles per gallon for the EcoBoost Mustang with either transmission with the better of the two likely offering at least 33mpg on the highway. That would be an increase of less than 10% over the V6 while that efficient 4-cylinder engine would still offer quite a bit more grunt.

Finally, there is the fact that many of the most impressive optional features for the 2015 Ford Mustang are offered with the EcoBoost and not with the V6. In the past, the base model V6 Mustang has come with a Premium package – as has the GT model – but based on the leaked pricing figures, the EcoBoost and GT models while have Premium packages while the V6 may not. If there is no V6 Premium (and maybe even if there is), adding any options to the relatively stripped out base model Mustang will quickly push the price past a comparability equipped Mustang EcoBoost so many prospective buyers who head to the dealership to purchase a base model Mustang with the V6 engine could very well find themselves driving out with some TURBO POWA!

Should the pricing and options for the 2015 Ford Mustang lineup have the effect that I am predicting and we see much of the V6 take rate shifted over to the EcoBoost, there is a good chance that Ford could stop using the V6 altogether. While some buyers might be resistant of the 4-cylinder model, it is hard to look past more power, better fuel economy and in some cases, a lower price, simply because you want a V6. This would be a very different story if Ford was trying to replace the Mustang GT’s 5.0L V8 with a similarly powerful turbo 4, but that isn’t the case. I believe that many of the people who are buying a V6 Mustang really won’t have any qualms with buying a 4-cylinder instead – if it is truly the better value.

Click here for a look at the leaked 2015 Ford Mustang EcoBoost and GT pricing and stay tuned to TorqueNews for all of your Mustang news – including any more official pricing once it becomes available!

Rojo wrote on May 24, 2014 - 11:05am Permalink
Love the look of this car after seeing it in the movies. Is the 4cyl cheaper? I heard that this year the base model looks as good as the GT unlike previous years where the base model looks cheap compared the the cobra and GT. Always wanted a mustange, maybe this year is the year.
Tom Reese wrote on May 25, 2014 - 11:27pm Permalink
I have owned 8 mustangs I own a 2012 cs/gt I like the new one but not crazy about the front end not bad but I dont care for the front grill area and the look of the fenders it.s hard to explain still like the car but not a home run a sun roof or top option would have been nice and I would have liked to see a true hatch back like my 91 fox body!! Still love the mustangs but was hoping for more in the new design.
anon wrote on July 9, 2014 - 9:40pm Permalink
Ecoboost isn't priced to kill anything. V6 is more reliable, sounds better, and in real world will get better gas mileage. Add a supercharger for the price difference and it's not even a comparison.
V6Pony wrote on July 20, 2014 - 8:36pm Permalink
I'm driving a premium 05 v6 convertible now (previous '95 coupe) and was intending to trade in for a 2015 v6 premium ragtop. The v8 is out of my budget and there is no way I will drive a four banger Mustang. Unless Ford adds a V6 premium convertible (Cloth seats as the only option for a ragtop is ridiculous), I'll have to look elsewhere for my next vehicle. Which would be a shame after driving Fords for most of my adult life (30+ years)
Tober wrote on October 27, 2014 - 2:37am Permalink
Now that some specs are out, and YouTube reviews posted, I'm going to wait until 2016 or 2017 to see what happens with the V6 & Ecoboost I-4 power plants. My plans are on hold for now. If an Ecoboost V6 is offered in the future, then I'll consider purchasing a stang.
Sean wrote on February 3, 2015 - 11:38am Permalink
No V6 Premium is an aweful move by Ford. Currently driving an '11 V6 Premium and I get their Eco Boost projected number from it. As a daily 24 mpgs and Highway 32 mpg's as long as im not in a hurry. Although the current valve and throttle body timing acts similar to a turbo. If there is an Eco Boost V6 it will likely replace the V8 in the GT. I am Very disappointed.
Dean wrote on February 16, 2015 - 4:07pm Permalink
Clearly Ford is trying to get the V6 phased out by severely limiting base model options and no premium model available. Had a 4 cylinder Mustang back in the '70s and swore I would never buy another one. The new one may be fine, just something I won't do. Going to hold off buying a convertible for now to see if they add back the V6 premium, or at least a leather option and stereo upgrade. I'm sure Ford is testing the waters for the 4 cylinder, I'm not diving in. While I would prefer a V8, the price has jumped too high. And I just can't see too many owners popping the hood on their new Mustang and beaming to their friends "hey guys look at my tiny 4 cylinder"... Be sure to write to Ford and let them know how you feel, I certainly did and willing to back that up with a no sale.
greg lewis wrote on February 20, 2015 - 12:26pm Permalink
had a 1984 turbo coupe after 60k the engine was old. had a 2007 srt8 charger,awesome power but was built, yum not so good. 2015 v6 mustang with the 3.55 and upgraded rims and sport pack. the car is great, 305 hp has plenty of power and drives very nice. I drive allot so i didn't want a 4 banger. this is a great car for the money. the eco just isn't worth the extra money.