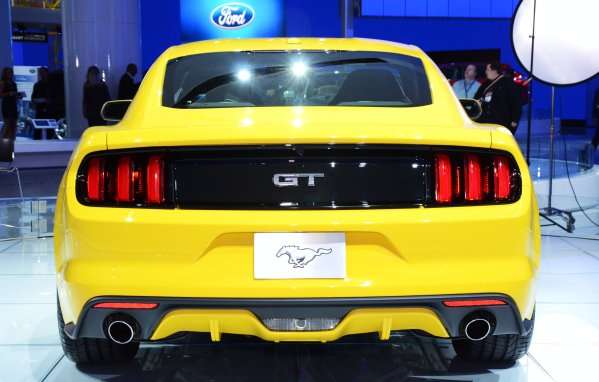 Yesterday we brought you the initial pricing for the 2015 Ford Mustang V6 fastback and the news that the order banks were officially open and today, we have new information regarding the prices of the 2015 Mustang GT and EcoBoost models.
Advertisement

First, I should point out that the Ford Motor Company statement announcing the pricing for the 2015 Ford Mustang and the official opening of the order banks only referenced the pricing of the base model V6 fastback with the 6-speed manual transmission. There was no mention of pricing for the Mustang GT or the new EcoBoost package, but the Mustang tuning experts at American Muscle have seemingly gotten ahold of more elaborate pricing information. Although these pricing details aren’t official, I am inclined to believe that the American Muscle crew has the connections in the Ford Mustang world to get their hands on his pricing information. After all, these guys were among the many who ordered a 2015 Mustang on the first day available.

As we announced yesterday, the 2015 Ford Mustang V6 fastback (050A) with the manual transmission carries a starting price of $24,425. According to AM, tacking on the popular equipment package (051A) raises the price to $25,420. These prices – and all of the prices below – include an $825 destination fee. Opting for the 6-speed automatic transmission adds $1,195 to the final price of all 2015 Mustang packages – which is the same cost as the automatic gearbox for the current (2014) Mustang.

As expected, the 2015 Ford Mustang EcoBoost package is priced as a premium option over the base V6 – but the price is quite a bit lower than I expected. I fully expected that the EcoBoost would be a touch less expensive than he Mustang GT – when in reality this new fuel sipping turbo 4 is only a skosh more expensive than the base V6 model. The 2015 Mustang EcoBoost (100A) will start at $25,995…making the EcoBoost option just $1,570 more than the base V6 and when you consider the improved power combined with the improved fuel economy, that is a very modest upcharge. Stepping up to the EcoBoost Premium (200A) brings the price to $29,995 while package 201A brings the starting MSRP up to $31,790. As we reported previously, the EcoBoost Performance Package adds $1,195, but it is unclear right now whether you need to order 200A or 201A for the Performance Package or if you can build a go-fast EcoBoost model around the base package.

Next up we have the 2015 Ford Mustang GT fastback pricing. Labeled as package 300A, the 2015 Mustang GT with a 6-speed manual transmission has a starting price of $32,925. That is only $890 more for the 2015 Mustang GT and when you consider the number of upgrades and new features relative to the current models – that is a remarkably reasonable upcharge for the new model. Opt for the more heavily appointed GT Premium (400A) package and the Mustang GT starts at $36,925 while package 401A brings the price of the GT Premium package before any other options up to $38,720.

However, when you consider the long list of new standard features (plus the new look, more power, better fuel economy and the new rear suspension setup), this upcharge for the new models is less than I expected. As we previously discussed, the GT Performance Package adds $2,495 to the final price so it looks as though buying a fully loaded up 2015 Mustang GT Premium will easily cost you more than $41,000.

Finally, the current top of the line option is the 2015 Ford Mustang GT 50 Year Limited Edition fastback. This model only comes fully loaded, with literally every option that Ford offers for the Mustang GT at launch and with only 1,964 examples of this special edition package planned – we expected a big price tag. The 50 Year Edition 2015 Mustang GT fastback carries a starting price of $46,995…$10,000 more than the GT Premium on which this special model is based. Since this package was announced, Ford has stated that the only option is the color and the transmission so it is unclear whether that price includes a “free” upgrade to the automatic transmission. If it does not, the price of the 50 Year Limited Edition Mustang would rise to $48,190.

Again, many of these prices are leaked and they are not from an official Ford statement or website, but I am inclined to believe that the folks at American Muscle are either right on or very close with these leaked figures.