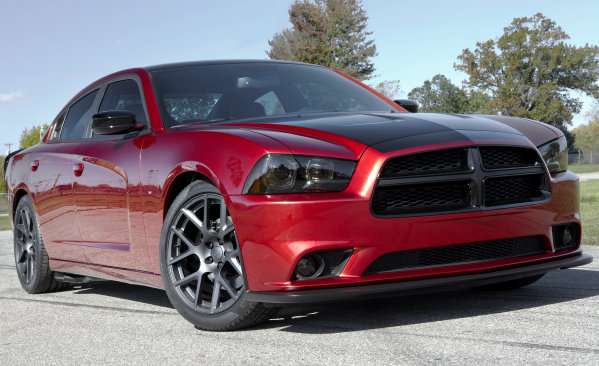 While we know that the new Hellcat Hemi will power the future 2016 Dodge Charger SRT, there seems to be plenty of space for the 6.4L Hemi in the Charger lineup as a Scat Pack option – similar to the setup of the 2015 Dodge Challenger.
Advertisement

The refreshed 2015 Dodge Charger R/T was introduced at the 2014 New York International Auto Show aside the entire 2015 Dodge Challenger lineup and due to massive amounts of attention paid to the striking redesign, very little attention was paid to the drivetrain. Chrysler has stated that the 2015 Charger will come in SE, SXT, R/T and R/T Road & Track with the 3.6L Pentastar V6 powering the SE and SXT models while the 5.7L Hemi will power all of the R/T models. We know that early next year, the Charger SRT model will arrive with the new 6.2L supercharged Hellcat Hemi, but there is no mention of the 6.4L Hemi that powers the current Charger SRT.

Anyone who has driven the current Charger SRT with the 470hp 392 cubic inch Hemi will surely testify that it is one wicked ride and with the expected high price of the Hellcat Charger, there is a huge gap in the Charger lineup. What is someone to do if they want something that has more than the 370hp 5.7L Charger R/T , but they can’t deal with the huge price tag of the 600+ horsepower Charger SRT?

This same problem was presented with the 2015 Dodge Challenger and to solve the problem with the brawny 2-door Mopar muscle car, the company introduced the Scat Pack trimline. The Challenger Scat Pack wears R/T badging but in terms of the working components, this new trimline is closer to the 2014 Challenger SRT than it is any of the Challenger R/T models – and that includes the powerful 6.4L Hemi V8. The Challenger Scat Pack bridges the massive gap in both price and performance between the 5.7L Hemi R/T and 6.2L Hellcat SRT packages and with the 2015-2016 Charger having that same gap – there is a perfect opportunity to introduce a Scat Pack trimline for the 4-door Mopar muscle car as well.

While the 2016 Charger SRT with the 600+ horsepower Hellcat Hemi will be a real monster, it will also come with a monster price tag that will likely be well above the price of the Charger R/T. People who would like to buy a new high performance Charger for $45-48k will be left in the cold (provided that they don’t want to buy a fully loaded up Charger R/T) if they aren’t able to face the price of the Hellcat models…which could range in the mid to upper $50k range.

Now, some people might be quick to point out that there was no mention of a Scat Pack Charger in the recent announcements; I have a hard time believing that Dodge will continue to offer the 6.4L Hemi in the Challenger without it being available in some form of the new Charger.