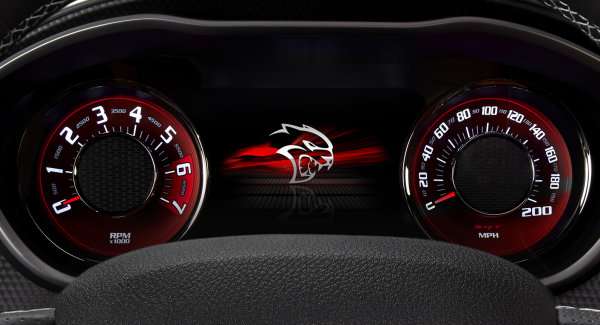 The 2015 Dodge Challenger SRT Hellcat will feature a 200 mile per hour speedometer, leaving us to wonder if the 600+ horsepower Mopar muscle car could be the 4th of the modern American performance cars to hit the 200mph mark – possibly joining some very impressive company including the Dodge Viper, the Chevrolet Corvette and the Ford Mustang.
Advertisement

Among the dozens of pictures of the 2015 Dodge Challenger SRT released earlier this week were a collection showing the high tech new gauge cluster with a thin film transistor (TFT) configurable information screen nestled neatly between a large analog tachometer and speedometer. That central screen is awesome – with all sorts of cool options like quarter mile timers, G-force meters, a digital speedometer and lots of other fun performance gauges as part of the SRT Apps. However, the most significant feature is the new speedometer…which ends with a large 200. Will the 2015 Challenger SRT Hellcat be capable of hitting that lofty limit – or is this new speedometer just adding “wow factor”?

The 2015 Dodge Challenger SRT has undergone some weight reduction efforts, but they are relatively minor and any weight savings are likely countered by the added weight of the new supercharger setup. Dodge would have to shave just over 300 pounds to be as light as the GT500 Mustang and even if they were able to do so, the Mustang is still likely to have a substantial power advantage. SRT is promising more than 600 horsepower and more than 575lb-ft of torque, which is a far drop from the 662 and 631 of the Mustang so it is hard to imagine that the heavier, less powerful Challenger SRT Hellcat will be able to hit the same top speed as the smaller, more powerful Shelby Mustang.

Hopefully, Chrysler proves me wrong and if they do, the Hellcat powered Challenger will join an incredibly elite group of high performance vehicles once reserved for the likes of the world’s most expensive exotics.