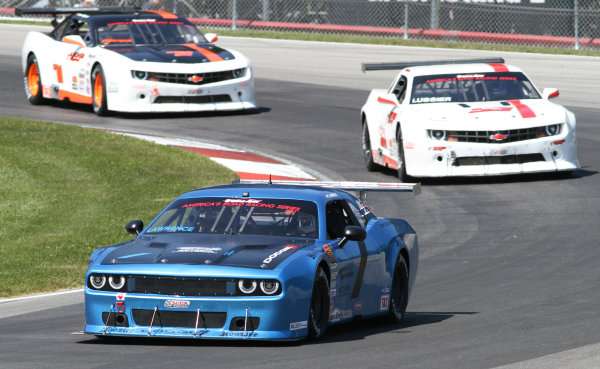 The Chrysler Group is looking to make an even bigger splash in the world of road racing with the introduction of the new 2015 Dodge Challenger SRT Trans Am racecar that hit the track for the first time this past weekend at the Mid-Ohio Sports Car Course – with a top ten finish and a very real chance of taking home the season championship even though there are only 4 races left.
Advertisement

Back in the 1970s, the Dodge Challenger, Ford Mustang and Chevrolet Camaro were best known for their work on the drag strip, but models like the Challenger T/A and the Boss 302 were designed specifically for production based Trans Am racing. Although the Mustang and Camaro have been major players in recent years in the road racing ranks, the Dodge brand has been absent from the modern Trans Am series – but that all ended this past Saturday when the 2015 Dodge Challenger SRT Trans Am racecar made its on-track debut at the Mid-Ohio Sports Car Course.

Challenger’s Return to Trans Am is Rocky, but Strong
On Saturday, the two 2015 Dodge Challenger SRT Trans Am racecars made their debut at the 3-Dimensional Services Next Dimension 100 at the Mid-Ohio Sports Car Course. In the 60 car field, the #1 Challenger driven by TA2 class leader Cameron Lawrence finished 10th while former SRT Viper ALMS driver Tommy Kendall finished 19th after running as high as 4th before seeing his hopes dashed by mechanical issues.

This wasn’t the start that Lawrence, Kendall or Team SRT had hoped for, but there were a variety of issues preventing the team from taking the win in their debut race.

First of all, Cameron Lawrence didn’t get his hands on the car until Friday afternoon so he missed qualifying and was forced to start at the rear of the field. After working his way up through the field a bit early in the race, Lawrence was slapped with a penalty for speeding on pit road and was once again required to drop to the rear of the field. Even with those problems, Lawrence finished 10th while also turning in the 3rd quickest lap time within the TA2 class. "I was really able to put the Challenger almost exactly where I wanted it. The handling is really close and we just need to work on things here or there. Coming through the field was more like survival, but the car ran really well,” said Lawrence. “We had a good pace. I was able to pass guys and really make some good moves in the car. It stayed under me. After the first time on the track, my first impressions of the car are really good. I'm sure with a little bit of work and with the engineering we have behind us, we'll get out in front pretty quickly."

Tommy Kendall got a much better starting position, qualifying 10th and within the first 20 minutes of the race, he moved his #11 Dodge Challenger up to the 5th spot. He later held the 4th spot until a problem with the Challenger’s rear differential forced him out of the race. Kendall and the #11 Challenger finished 19th. "That was a day's worth of action for sure. I was told to just be patient and stuff starts happening. So I did and one at a time things started to happen. The car was similar to qualifying and we made quite a few changes, but we still had some issues,” said Kendall. “It was the first time we've run a full tank of fuel, so the rear weight was really not turning well at all. Right before the rear end started to break, it was finally becoming decent and I was starting to pull Ty Dillon in a little and I was like, 'Okay, here we go.' They told me these cars tend to be better late in the race and it was working out that way. We're going to have to dial that window in and better understand how much the cars change."

A Championship within Reach
While it might seem odd to read this, the 2015 Dodge Challenger SRT has a very real chance of taking home the Trans Am TA2 class championship thanks to Cameron Lawrence. After dominating the class this season in his Chevrolet Camaro, Lawrence held a big lead coming into the Mid-Ohio race. With his 10th place finish, he maintains a 19 point lead in the run for the title over the second place driver.