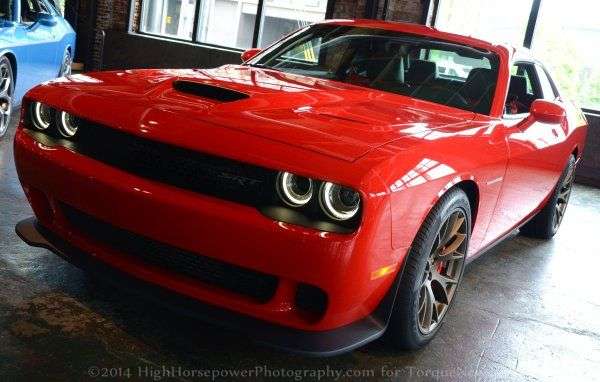 While attending last week’s 2015 Dodge Challenger launch in Oregon, a variety of Chrysler Group representatives had no expectations of productions limits for the 707 horsepower SRT Hellcat model, but a new report based on insider information suggests that the Chrysler Group may build just 1,200 examples of the Hellcat Challenger in the first model year - which could lead to colossal dealership markups.
Advertisement

When I first told my wife (who also works in the auto industry) that the 2015 Dodge Challenger SRT Hellcat would carry a starting price of just $59,995, her reply was “Wow…they are going to sell a ton of them.” I agreed, as with 707 horsepower making it the most powerful American production car ever while also ranking as the 6th most powerful production car in the world today AND starting right around $60k, there are few high performance bargains in the world that can rival the Hellcat.

Best of all, when speaking with the Dodge brand representatives on hand at last week’s 2015 Dodge Challenger launch, there didn’t seem to be any plan for the SRT Hellcat to be available on a limited basis.

Unfortunately, a new report from the folks at Edmunds cites inside information that insists that the Chrysler Group will only build 1,200 examples of the 2015 Dodge Challenger SRT Hellcat. Should that be true, these 707 horsepower monsters will be hard to get and – far more importantly – they will likely carry a massive dealership markup if they are really limited to such low production numbers.

Unfortunately, my impressions of driving the Hellcat are still under embargo, but even without driving the most powerful American production car of all time – most people with any common sense would agree that this isn’t a car for everyone. Some people wouldn’t want 707 horsepower and others simply shouldn’t have that kind of power so it is just as obvious that the SRT Hellcat package likely won’t battle the Challenger R/T for the highest take rate in the new model year.

The fact that the 2015 Dodge Challenger SRT Hellcat packs 707 horsepower is what makes it so magical, but that is also what will limit the number of people who are really going to put the money down to secure a Hellcat of their own. Much like the Ford Shelby GT500 Mustang, the Chevrolet Camaro Z/28 and the Chevrolet Camaro ZL1 – the Hellcat will be a low volume package.

According to the ZL1 Registry, GM produced 1,971 Camaro ZL1 coupes for the 2012 model year, but the production number jumped to just south of 8,000 units for 2013 with about 6,000 of those being coupes. Those Camaro ZL1 coupes are the closest competition for the Hellcat Challenger, so the demand just for the high performance Camaro would suggest that demand for the 707hp Challenger could far exceed those rumored 1,200 units.

Because of what would likely be a big demand for the 707hp Dodge Challenger, having just 1,200 produced for the 2015 model year could make them very hard to get. Worse yet, a production limit of 1,200 units would make it hard for dealerships to get them – which brings us to the much bigger problem...Gigantic dealership markups.

Expect Massive Markups on the First SRT Hellcat Challengers
Regardless of the final number of Dodge Challenger SRT Hellcat models built for the 2015 model year, it is all but set in stone that the first units sold to the public will have massive dealership markups. This is true with almost any new high performance vehicle and the people who plan to nab one of the first examples of the Hellcat Challenger almost certainly expected to pay well over the $59,995 base price while those buyers who wait a while can expect to pay closer to MSRP.

Unfortunately, limiting the production of the 2015 Dodge Challenger SRT Hellcat could cause a much bigger markup – and a much longer period of time where those markups are being changed by dealers. Should the Chrysler Group really only build 1,200 examples of the 707hp Challenger for 2015 to be spread across their network of 2,400+ dealerships, those folks selling the Hellcat will likely apply a massive markup to every unit that reaches a showroom.

Fortunately, there is the fact that the Chrysler reps at the 2015 Dodge Challenger launch didn’t have any production limitations so here is to hoping that these particular insider reports are incorrect. A lower production number may not have a massive impact on the final sales of a car like the Challenger SRT Hellcat, but a production limit as low as 1,200 units will almost surely drive the price of the 707 horsepower muscle car through the roof.

Kevin Shail wrote on July 21, 2014 - 12:59pm Permalink
If they do that they will have pissed of a dodge customer. Currently own a 2010 & 2013 challenger srt8 and a dodge truck. Here I come Ford.
Richard Skelly wrote on July 21, 2014 - 2:28pm Permalink
I'm with you Kevin. I own a 300C 07 and have been waiting for this Hellcat to come to life. If NO Hellcat then NO Dodge for me. I can shop somewhere else.
Brandt wrote on July 27, 2014 - 12:43am Permalink
Yep, been away from dodge for some time and playing that limit game would finish me for good.
Rob Raisor wrote on July 21, 2014 - 3:30pm Permalink
I want one and I have the money for one but I'm not going to pay a large mark up.....sounds like I'll get a Shelby instead
AL ALLEE wrote on July 21, 2014 - 7:17pm Permalink
I work at a Dodge dealership and I'm hoping that they don't limit the production of this vehicle. If they do most likely all dealers that can get their hands on them will mark them up due to supply and demand. I would guess to see a mark-up of up to $10k at most but then again, it comes down to supply. Right now I have at least 10 customers that want this vehicle and if we only get one or two the only fair thing to do would be to offer them to the highest bidder. But then again, right now, we don't even know so it's a waiting game. Hopefully we will know in the beginning of next month
Den wrote on July 22, 2014 - 5:47pm Permalink
This is a very old an aging platform and the plant in Brampton, Ontario has got huge excess capacity. They will build every one they can get an order for. Anybody who pays over sticker is a sucker.
Tjuan Evans wrote on July 22, 2014 - 10:35pm Permalink
Dodge dealership told me today that 8/8 it can be ordered. Me and my brother are going to get one each, hopefully this process isn't as crazy as I think it will be. Mark-ups, highest bidders etc. Thats crazy.
parish jordan wrote on December 20, 2014 - 9:52pm Permalink
dear mr. tjuan evans, I am a certified dodge new car salesman for 15 and half years. I would not mind selling you a loaded dodge challenger hellcat its a fast unique sports car. parish jordan
Rob wrote on July 23, 2014 - 12:12am Permalink
Dealer here in Hawaii is demanding a $25,000.00 deposit. That is all fine and dandy, but that is on top of the MSRP which you will pay upon delivery. Get Rekt dodge.
Jamie Collingwood wrote on July 24, 2014 - 1:18pm Permalink
If your willing to travel to Ohio my guy can order you one.. no mark up guaranteed.
aaron wrote on July 27, 2014 - 12:52am Permalink
I live in southern ohio. Who`s your dealer
Jamie wrote on July 27, 2014 - 6:35pm Permalink
Email me at [email protected] and ill send you his info.
Curt wrote on July 25, 2014 - 6:07pm Permalink
If they limit these beasts and cause the price to go through the roof, I will take my SRT and trade it in for my First Ford GT500 and I have owned Dodge since my 67 Hemi Cuda when I was in High school. btw I hate Fix Or Repair Daily (ford). It would be yet another Viper mistake.....
Jorge wrote on August 3, 2014 - 11:53am Permalink
My friend already bought one and he paid almost 80 grant i was thinking about buying one but i think I'm going to buy a shelby instead.
Hayden wrote on August 7, 2014 - 2:18pm Permalink
I called Dodge Coorporate on 8/6/2014 ... there will be no limits on production of the car and will be available to purchase to the general public end of September. As of 8/6 no dealer in my area (Cincinnati, OH) has any pricing information for 2015 Challengers, other than the base model.
paul lumbo wrote on August 14, 2014 - 10:50am Permalink
I own a2009 srt challenger, In 2008 I wanted to get one ,but the markup were ridiculous, got my 2009 at tissue and zero financing. Be patient.
Sonia wrote on August 30, 2018 - 3:16pm Permalink
Unquestionably believe that which you said. Your favorite justification appeared to be on the internet the easiest thing to be aware of. I say to you, I certainly get annoyed while people consider worries that they just do not know about. You managed to hit the nail upon the top and also defined out the whole thing without having side effect , people can take a signal. Will likely be back to get more. Thanks