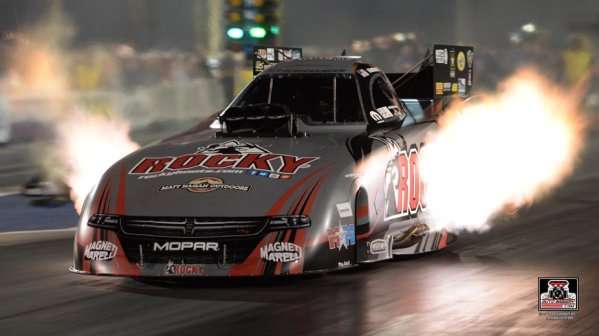 2015 Charger Wins in Bristol in All-Mopar Final Round

When the teams of the NHRA Mello Yello Drag Racing Series arrived in Bristol, Tennessee this past weekend, the 2015 Dodge Charger drivers of Don Schumacher racing were looking to continue their incredible domination of the funny car class. Schumacher Chargers won the first four events of the season and seven of the first ten races, with John Force’s Camaro winning two events and Tim Wilkerson’s Mustang claiming one trophy this season.

The domination of the 2015 Dodge Charger funny cars did indeed continue in Bristol, with Matt Hagan winning for the 4th time this season in an all-Mopar final round with Ron Capps and in the semi-finals, three of the four cars competing with Schumacher Chargers.

Qualifying
When the funny cars first hit the track on Friday for qualifying, the Schumacher 2015 Charger funny cars didn’t get off to a great start, but that has been the case throughout much of this season. After qualifying round 1, Ron Capps was 3rd, Matt Hagan was 6th, Jack Beckman was 9th, Tommy Johnson Jr was 16th and John Hale – who drives an “old” 2014 Dodge Charger funny car – sat 8th.

Things got much better for the entire field during qualifying round 2, with Hagan’s Charger jumping to 3rd, Beckman moving to 4th, Capps dropping to 5th (even though he improved on his round 1 time), Johnson jumped up to 9th and Hale dropped to 13th. To give you an idea of how much fastest the field was in round 2, consider the fact that the fast qualifier time from round 1 was a 4.121 by Chad Head’s Toyota, which put him in the 10th spot after round 2. The quickest times of the round were turned in by Tim Wilkerson’s Mustang and Del Worsham’s Toyota; both of whom barely edged out Hagan’s time.

The field slowed down for round 3, so Hagan, Beckman and Capps all held their position from the previous round while Tommy Johnson Jr dropped to 11th and John Hale dropped to 14th.

Finally, things got serious in the final round of qualifying, with the quickest times of the weekend turned in by the funny car field. John Force set the pace early on with a blistering 3.978 at 323mph in his Camaro while both Matt Hagan and Jack Beckman also dipped into the 3 second range with their 2015 Chargers, sitting 2nd and 3rd. Capps dropped to 8th, Johnson dropped to 11th and Hale dropped to 14th – but all of the Chargers were in the race day field.

Eliminations
In round 1, Ron Capps and his 2015 Charger knocked out the Camaro of Robert Hight, Matt Hagan beat Jeff Diehl and Jack Beckman beat John Hale while Tommy Johnson Jr lost to Tim Wilkerson. Fast qualifier John Force backed up his awesome entry times with the quickest pass in round 1 of eliminations and his 4.100 run would be the quickest elimination pass of the event.

In round 2, Ron Capps had the unenviable tasks of taking on John Force and even though Force’s Camaro held the early lead, problems down the track gave the big win to Capps. Matt Hagan turned a starting line advantage into a sound thrashing of Cruz Pedregon and Beckman beat Wilkerson in a very tight race. This meant that the final four entering the semis were the 2015 Chargers of Hagan, Capps and Beckman, along with the Toyota of Tony Pedregon.

In the semis (round 3), Pedregon pulled a big starting line advantage, but when things went south for the Toyota, Capps took the win and secured his place in the finals. In the other half of the bracket, Matt Hagan took a big starting line lead over Beckman and went quicker on the top end, claiming his spot in the next round and setting up yet another all-Mopar funny car final.

Finals
In the final round, Don Schumacher Racing teammates Ron Capps and Matt Hagan went head to head once again. The two have met 30 times in their careers and 4 times in a final round, with Capps leading the series score 20-10 overall and 3-1 in final rounds. However, statistics wouldn’t predict this race.

Hagan got out first with a considerably better reaction time and he never looked back – claiming his 4th win of the season as Capps had one of his worst runs of the day in the finals, running a 4.186 to Hagan’s 4.164.

There are seven races remaining before the drivers head into the 6-race championship shootout, but right now, it is hard to imagine anyone other than a 2015 Dodge Charger driver winning this year’s funny car championship.