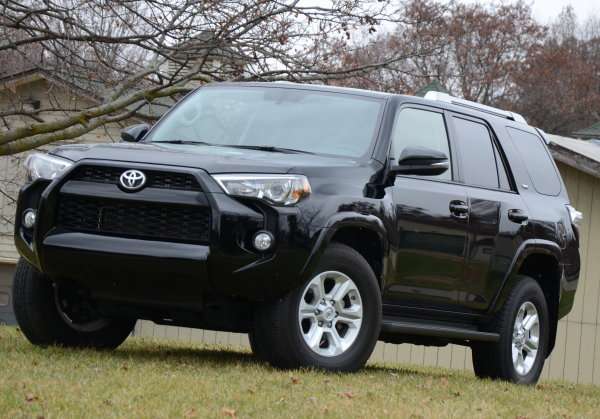 While the 2014 Toyota 4Runner has an aggressive new face, this 4Runner SR5 is the same tried and true SUV that it has been for decades now and when I put this to work around the stables – it stood up to every test with flying colors.
Advertisement

Before I get into my workhorse review of the 2014 Toyota 4Runner, I want to talk about one of my favorite vehicles I have owned and a pet peeve of mine among the larger SUV segment.

I have owned a bunch of vehicles, but my favorite personal vehicle that didn’t have at least 400hp was my 1983 Dodge Ramcharger. It was a proper SUV that looked like a truck, felt like a truck and could do the work of a truck while having plenty of seating for four adults and a huge cargo area. It was big, rugged and very near unstoppable and while it was technically an SUV, it really felt more like a truck in every way. I loved that truck and it worked hard until I finally parked it with more than 325,000 miles on the odometer. It towed, it hauled, it dealt with the worst winter road conditions and it even had enough space for me to pack my entire life inside and move to Michigan almost a decade ago. It was easily one of the most reliable vehicles that I have ever owned and I loved the stiff, truck-like drive qualities.

Unfortunately, the trend of SUV sales among people who really don’t need a truck-like vehicle has led many automakers to transform their SUVs from being more like trucks to being more like big cars. The original SUVs were built to work and feel like trucks because they were intended to serve as an alternative to trucks. Today’s SUVs feel like cars because they are usually intended to serve as an alternative to a minivan or a station wagon. Because of that, almost none of the SUVs that I test remind me of a proper SUV like my old Ramcharger. The 2014 Toyota 4Runner is a rare exception, as this midsized SUV feels like an SUV should feel while being able to do many of the things that you can do with a midsized pickup.

The Exterior
The 2014 Toyota 4Runner gets an exterior refresh that really focuses on the front end, which is now far more aggressive than past models. While the 4Runner still has a similar look to the 2013 models, 2014 brings about angular new headlights, a bolder grille and hard angles etched into the outer edge of each front corner – all of which make the newest 4Runner one mean looking SUV. From the side, the 2014 4Runner has big, square wheel openings that bolster the aggressive look while the long, tall roofline gives it a proper SUV silhouette while all black trim pieces give it a rugged look. There is no chrome on the entire 4Runner outside of the headlights, the taillights and the logos – and I really like that. Molded running boards make it easier to get up into this high riding SUV, but they are mounted high enough that they don’t reduce ground clearance. Out back, LED taillights with chrome bezels flank a large rear liftgate that allows you to use every bit of the massive rear cargo area. The changes made to the exterior of the 2014 Toyota 4Runner make it far more aggressive and while some might not like the angry looking face, I love the changes to this new model.

The Interior
While the 2014 Toyota 4Runner is technically a midsized SUV, you wouldn’t know that when sitting in the spacious cabin. Whether you are sitting in the front or second row seats, you have a ton of leg and knee room, even for very tall drivers or passengers. There is also plenty of headroom, elbow room and shoulder room for everyone while large front and rear door openings make it easy to get people and cargo in and out. Even the rear middle seat offers enough hip space for an adult, although having three adults in the back does make it a little tight. Three small kids can comfortably enjoy the rear seat together, so this is a great cabin for a larger family. The leather seats are comfortable and wide up front and in the rear outboard positions, with power control and heated surfaces for the driver and front passenger. As I mentioned above, the rear cargo area is huge, with as much functional space as any SUV in this segment and some larger vehicles. It really is impressive how well Toyota has made use of every bit of this interior. In terms of infotainment, the 2014 Toyota 4Runner wont blow your mind, but it also doesn’t leave you wishing that you had spent more money. A 6.1” touch screen mounted high on the dash offers access to the sound system, the hands free phone system, the navigation system and the Entune Apps system and for those who are more comfortable with knobs and buttons – this screen is surrounded by more traditional controls. There are also some controls on the steering wheel for the basics like stereo volume and the hands free phone system, but there is still no dedicated button for navigation. It is a minor complaint, but there really isn’t much to complain about with the 4Runner. This interior isn’t packed full of gadgets, but it does offer an incredible amount of space for both passengers and cargo with a modern infotainment package that brings you all of the basics. This is an interior that fits the title of a proper sport utility vehicle, with room for five and enough cargo space to carry luggage for the whole family…or golf bags for five people. The Drive
As I mentioned early on, the 2014 Toyota 4Runner rides like a proper SUV with a stiff ride and a tall stance that I absolutely love. This is how a real SUV should sit in stock form and this is how a real SUV should ride. Mind you, the ride isn’t stiff enough to beat you up, but this isn’t another SUV that has squishy suspension that makes it ride like a car. The 4Runner is surprisingly quiet on the highway and it is stable at highway speeds, but you will feel more of the road than you do in some of the softer SUVs on the market. Best of all, this stiff ride translates to an SUV that will handle a rough dirt road with deep ruts and sloppy mud with total confidence. I didn’t do any true off-roading with the 4Runner, but I attached some of the roughest unpaved roads in my area and it handled the worst roads with ease, even when I stopped dead in the sloppiest mud I could find. It didn’t bat an eye at the mud and it took the harshest ruts in stride. The 4.0L V6 engine of the 4Runner provides 270 horsepower and 278lb-ft of torque, and while that makes it a little lighter on power that some other SUVs in the class, the 4Runner never feels underpowered in normal driving circumstances. It can accelerate quickly enough to merge into fast moving traffic and it doesn’t have any problems comfortably eclipsing any posted speed limit in the Metro Detroit area. It isn’t the fastest or quickest SUV on the road, but it has the right amount of power to conquer any daily driving situation.

In terms of fuel economy, the 2014 Toyota 4Runner isn’t great – but it isn’t terrible either. The EPA expects figures of 17 around town, 21 on the highway and 18 combined. I got much lower average numbers, but I spend more than a quarter of my drive time hooked to a trailer or packed with horse feed so my numbers aren’t fair. I did average 13mpg total, which I consider to be pretty solid considering the towing and hauling work.

After learning that the 2014 Toyota 4Runner rode like a real SUV, I couldn’t wait to see how it handled a heavy payload and my horse trailer. My test trailer normally weighs right around 5,000 pounds and with the 4Runner having a towing capacity of 4,700lbs, I had to test it with one horse less in the trailer, bringing the weight of the trailer to around 4,000lbs. Even though the trailer is a bit lighter than it is when being tested behind most other vehicles, the 4Runner didn’t accelerate quite as well as I like. Granted, you never accelerate hard with horses in the trailer, but the 4Runner did have to work pretty hard to maintain speed on bigger hills so when towing near its capacity, the 4Runner isn’t quite as quick as Id like. However, it brakes and handles very well with the trailer hooked up so those prospective buyers looking to tow something a bit lighter than a horse trailer should find this to be a great option. Really, it handled the horse trailer well – it just seemed to be a bit on the sluggish side when pulling the heavy load at highway speeds. Finally, after the trailer testing was complete, I took the 2014 4Runner to the feed store to pick up some grain for the horses. We loaded 600lbs of bagged grain into the massive cargo area and it fit without any problem. In driving back to the stables, the performance didn’t seem to be affected much by the extra weight, as the 4Runner accelerated, handled the turns and slowed down just as well when traveling at normal speeds as it did when the cargo area was empty. The 4Runner aced the hauling test and I imagine that it could take a great deal more weight without feeling like it is struggling with the added ballast.

The Final Word
If you are looking for a roomy SUV that rides like a proper high riding sport utility vehicle, will handle a serious payload and will very comfortably handle a smaller trailer, the 2014 Toyota 4Runner should definitely be a vehicle that you drive before making your next purchase. The 2015 models are on the lots now, but there are still 2014 models sitting at dealerships around the country – which means that some careful shopping can get you this great midsized SUV with an end-of-year discount.

For those buyers who want their 4Runner to be a little tougher, read more on the award-winning TRD Pro model by clicking here.