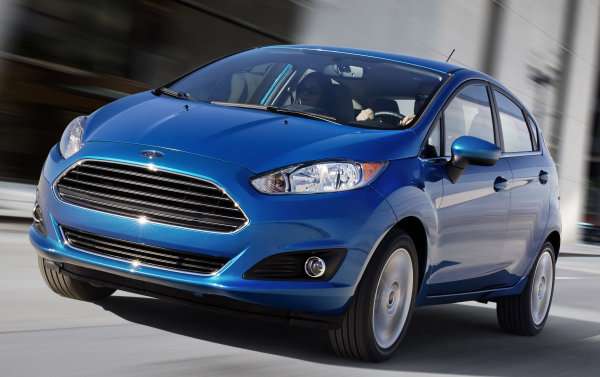 The fuel economy figures for the new 2014 Ford Fiesta with the 1.0L EcoBoost 3-cylinder have been posted on the EPA FuelEconomy.gov website and with 45 miles per gallon on the highway – the 1.0L Fiesta is one of the most efficient cars sold in American and best of all, it hits those numbers without the high price of many hybrids.
Advertisement

While great fuel economy is a big selling point, fuel saving technology seems to come with a high price that causes hybrid models to carry a higher price than less efficient models but in the case of the 2014 Ford Fiesta SE with the 1.0L EcoBoost 3-cylinder, the price is kept very low so you can have your cake and eat it too – or at least get 45mpg on the highway without having to pay $25,000 for the vehicle. The 1.0L EcoBoost option is currently only available for the mid level 2014 Fiesta SE which carries a price of $16,245 for the sedan and $16,845 for the 5-door hatchback. This fuel sipping engine is part of a package that includes the 5-speed manual transmission (no automatic transmission is available with the engine yet), 15 inch steel wheels, a regenerative braking system, EcoBoost badging and a rear spoiler on the sedan for just $995 so when you factor in destination fees, you can buy the 2014 Fiesta SE sedan with the 1.0L EcoBoost 3-cylinder engine for $17,240 while the hatchback model that offers 45mpg will cost you just $17,840.

Now, I would imagine that right now, many of you are questioning whether or not a 3-cylinder engine that yields 45 miles per gallon can offer enough pep for the average American driver but with 123 horsepower paired with 148lb-ft of torque – the smaller EcoBoost motor actually provides quite a bit more power than the standard 1.6L mill which is standard across the Fiesta lineup. This 45mpg 3-cylinder engine offers only 3 more horsepower than the larger standard engine but with an extra 36lb-ft of torque being sent to the wheels via a manual transmission, the 1.0L Fiesta will likely be more fun to drive than any other option shy of the high performance Fiesta ST.

I have not yet driven the 2014 Ford Fiesta SE with the 1.0L EcoBoost engine but I have driven a European spec Ford Focus with the same drivetrain. Even in the larger Focus, this drivetrain provided plenty of gusto both from a stop and when already in motion for the average driver so this tiny engine in a lighter Fiesta should have no problem satisfying most American drivers who want a car that can deliver 45 miles per gallon. Even with the $995 upcharge for the SE Manual EcoBoost package, this drivetrain configuration should be a popular choice among those folks who are coordinated enough to drive a stickshift as this new engine option offers a significant amount more power and at least 10% better than a comparable Fiesta with the standard 1.6L engine.