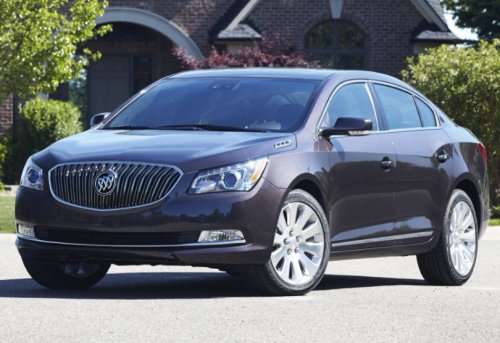 General Motors has announced some pricing tidbits for the refreshed 2014 Buick LaCrosse and in exchange for the new exterior look, greater level of luxury and a handful of new high tech goodies – the 2014 LaCrosse also comes with a new price that is over $1,500 more than the current models.
Advertisement

The 2014 Buick LaCrosse will carry a starting price of $34,060 including a destination charge of $925 and this price includes features like a configurable 8 inch thin film transistor gauge cluster, the next generation IntelliLink system and the 2.4L eAssist drivetrain that promises 36 miles per gallon on the highway. The 2013 Buick LaCrosse with the same 2.4L eAssist drivetrain and the current IntelliLink system starts at $32,555 including a destination fee of $895 so buying the most basic version of Buick’s flagship sedan will cost $1,505 more in 2014 than it does right now.

General Motors didn’t go into too much detail on the 2014 Buick LaCrosse pricing but the company did go into some details on available option packages for the new model year. Those who want their 2014 LaCrosse to do some of the thinking for them can opt for the Driver Confidence packages that come in two stages. Package one includes features like Forward Collision Alert, Blind Zone Warning, Lane Departure Warning, Rear Cross Traffic Alert, HID projection headlights and a head-up driver display for $2,125. Package 2 builds on the first one and adds Adaptive Cruise Control, an Automatic Collision Prep system and the patented Safety Alert Seat that we tested and appreciated in the new Cadillac XTS with a price of $1,745 that is added onto the $2,125 cost of the first package for a total price of $3,870 for those who want all of the high tech helpers.

Next, GM has added the new Ultra Luxury package for the 2014 Buick LaCrosse that is designed for buyers who are “looking for the highest in fashion and comfort.” This package is only available on certain (currently unspecified) trimlines and it adds unique dark Tamo Ash wood trim throughout the cabin, jet black synthetic suede on the headliner and Semi-Aniline full leather seats in a unique sangria color. This high lux package also adds $2,495 to the final price and I would guess that the $34,060 base model mentioned above is not available with this option so depending on the pricing of those trimlines that feature this option – the MSRP of the Ultra Luxury equipped Buick sedans could climb well over $40k.

The list of standalone options for the 2014 LaCrosse includes features like a Bose audio system, navigation, a rear seat entertainment package, a sunroof and a variety of wheel options depending on the trimline. Also, GM has mentioned that standard equipment for the higher end trimlines will include goodies like rear park assist, a backup camera, keyless entry, keyless start, a heated steering wheel, heated and cooled front seats, a power rear sunshade and – of course – leather seats. Unfortunately, the company hasn’t gone into any detail on what the trimline list will look like or how much those non-base models will cost when they arrive.

Further pricing information has not been offered for the 2014 Buick LaCrosse but we do know that it will be offered with the optional 3.6L V6 with 304 horsepower for no additional charge over the standard eAssist 4-cylinder mill. GM has stated that the V6 powered LaCrosse in 2014 will offer fuel economy ratings of 18mpg in the city and 28 on the highway – an increase of 1mpg in each category. We can also expect to see all wheel drive offered but as is the case with the current models, the 2014 LaCrosse will only offer AWD with select packages. GM expects that the V6 AWD LaCrosse will offer 17mpg around town and 26 on the open road compared to the 17 and 25 offered for 2013.

We can expect more detailed pricing for the 2014 Buick LaCrosse once we get closer to the dealership launch of these models later this year but even with the moderate pricing increase – the LaCrosse will likely continue to serve as a great bargain for those buyers who want the feel of high end luxury without the high end price.