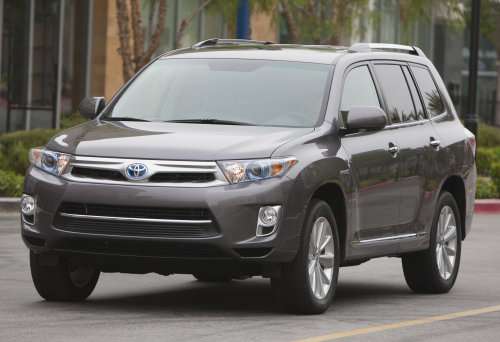 While the sport utility vehicle segment is chock full of vehicles desperate to offer good fuel economy, the 2013 Toyota Highlander Hybrid Limited offers some of the best EPA ratings in the segment while also offering great power, tons of interior space and every modern gadget that you could ask for in an SUV.
Advertisement

I am not an “SUV person” and I am not a “hybrid person” so you would think that the 2013 Toyota Highlander Hybrid Limited would be somewhat of a rolling nightmare but I found that to be quite the opposite after spending a few days behind the wheel of this seven passenger fuel sipping sport utility vehicle. Where most “fuel efficient SUVs” are stripped down and either tiny and cramped or underpowered and not-so-efficient, the Highlander Hybrid offers gobs of interior space, lots of interior gadgets, plenty of power and a great all wheel drive system that debunks most myths on the hybrid SUV.

The Exterior
The 2013 Toyota Highlander Hybrid Limited has an exterior design that is unique from the rest of the Highlander lineup. This starts up front where the Hybrid package adds a unique front fascia with a larger, split opening in the lower fascia with the fog lights mounted in chrome bezels that are larger than those found on the non-hybrid Limited models. The Hybrid package also adds a smaller upper grille with a unique design, a blue Toyota logo in the grille and a set of dark headlight housings.

Along the sides, the Highlander Hybrid Limited wears package specific 19” alloy wheels wrapped in low rolling resistance all season tires as well as a unique lower rocker panel that is painted to match the body color (non-hybrid models have black lower rocker panels). The long, flat roofline offers plenty of space for those who choose to use the chrome roof rails for large cargo and the black painted B and C pillars work with the dark tinted windows to give the Highlander an upscale, sporty look.

Out back, the 2013 Toyota Highlander Hybrid Limited gets a set of dark taillight lenses that match the dark headlights, another blue trimmed Toyota badge, Hybrid Synergy Drive badging and a body colored rear fascia instead of the black fascia found on non-hybrid models. A chrome appliqué across the middle of the rear gate and the chrome bumper cover running across the front of the cargo area opening add a touch of class to the rear of the hybrid SUV.

The Interior
Many hybrid models have interiors that are stripped down to reduce both price and curb weight but that is not the case with the 2013 Toyota Highlander Hybrid Limited as this cabin packs as much luxury as any vehicle in the class – hybrid or not.

Up front, both the driver and the passenger get heated seats with power adjustments along with equal access to the big, bright display audio infotainment system. This includes the Toyota Entune information system, a stereo system with satellite and USB connectivity that pumps the sound through a JBL 9 point speaker system, a Bluetooth hands free phone system and a state of the art navigation setup. In addition to the touch screen controls and the buttons and knobs located around the touch screen, the Highlander Hybrid has controls on the steering wheel to control the stereo system and to activate the Bluetooth phone system. There is also a button to toggle through the options in the customizable 3.5” driver information center that is mounted high on the dash, above the 6.1” infotainment screen. The driver information screen offers readouts for things like outside temperature, a clock, climate control settings, fuel economy figures and hybrid system information. While rear riders don’t get heated seats, but they do get a comfortable bucket style seat for the outer two positions along with their own HVAC controls mounted on the back of the front seating console. As part of the rear entertainment package, my Highlander Hybrid test vehicle was equipped with the DVD player and screen system mounted in the roof in an easy access unit that contains the foldaway screen. This system can broadcast through the vehicle speaker system or through the wireless headphones that come for an addition price. This is a great system and a really nice rear seat setup for a family with two kids on a long drive…provided that they will quietly watch the same program.

While all of the interior goodies are nice, one of the most significant features of the 2013 Toyota Highlander Hybrid Limited is the massive amount of interior space. From the outside, the Highlander doesn’t look like that big of a vehicle but when I climbed in for the first time, I was stunned by the amount of space for the driver and passengers. Whether you are sitting in the front or middle row of seats, this is a vehicle that allows you to stretch out. The front seats are big and wide with plenty of head, elbow, knee and leg room for both the driver and passenger – with enough adjustability in the driver’s seat to accommodate both tall and short drivers. The second row of seats also offers huge amounts of head and elbow room but most importantly, even with the front seats adjusted for a very tall driver and passenger, the rear passengers still have plenty of leg room. There is a third row of seats that folds down to create a large flat cargo area, but I wouldn’t try to seat many adults in that rear-most pair of seats. When the seats are in their upright and locked position, they do add an extra couple of seats that work nicely for smaller children but I spent the majority of my test time with the third toe folded down. When folded down, the rear cargo area is about as big as any in the segment with a huge opening from the rear that allows you to load in boxes that are just as big as the rear cargo area.

The interior of the 2013 Toyota Highlander Hybrid Limited offers just about everything that you could ask for in a vehicle in terms of high tech gadgets with the passenger room offerings of a larger vehicle. This isn’t a hybrid that makes you go without the modern amenities for great fuel economy and whether you are driving across town or across the state – the Highlander Hybrid provides tons of comfort and space for up to 7…provided that a few of those people are kids.

The Drive
The 2013 Toyota Highlander Hybrid is powered by 3.5L V6 engine mated to an electric hybrid assist system and an Electronically controlled Continuously Variable Transmission (ECVT) – a system which provides a total output of 280 horsepower. This is the most powerful Highlander drivetrain and with a promise of 28 miles per gallon whether you are on the highway or around town, it is also the most efficient. In a segment where many hybrid models offer very little power in place of solid fuel economy or reasonable power with mediocre fuel economy figures, the Highlander Hybrid packs the power that you need in an SUV and the fuel economy that you want from a modern hybrid. While I was not able to hit the average figure of 28 miles per gallon, the majority of my drive time in the Highlander Hybrid was in pretty serious snow with very little highway driving. In eight days driving the Highlander, I averaged around 25 miles per gallon but I found that on days where I didn’t have to deal with poor driving conditions, I was able to hit that 28mpg figure around town and on the open road. Best of all, the Highlander Hybrid drives very much like a “normal” SUV with just a touch of noticeable brake pedal “squish” (that plagues man vehicles with regenerative brakes) but the average driver won’t notice that the brakes are any different from any other vehicle. Beyond the spongy brake pedal, there is really nothing to complain about with the drive quality of the Toyota Highlander Hybrid.

As mentioned above, while driving the 2013 Toyota Highlander Hybrid Limited I dealt with a tremendous amount of snow including a day where wet weather turned very cold, covering the roads with ice and then piling several inches of snow on top of that ice. This was the kind of weather that saw even the most well known SUVs sliding off of the road but the Highlander Hybrid was unstoppable in even the worst conditions. Both in creeping around town in snow-slowed traffic or rolling along the highway at higher speeds, the Highlander Hybrid never batted an eye at the horrible road conditions. Be it deep snow or thin snow over thick ice, this hybrid Toyota SUV didn’t have any problem getting me to my destination.

When the roads weren’t covered in snow and ice, I had a chance to push the 2013 Toyota Highlander Hybrid Limited a bit and the 280 horsepower hybrid drivetrain replied with a surprising amount of pick-up along with a top speed well in excess of the posted highway speed limit. This isn’t a sluggish, heavy hybrid SUV that is starved for power in the name of good fuel economy and I found that it accelerated just as well as the vast majority of non-hybrid SUVs on the market today – and better than many other hybrid utility vehicles. In addition to being peppier than I would have expected, the Highlander Hybrid provided a much smoother ride than I expected from this brawny SUV. Where some SUVs of this size ride more like a pickup truck with a stiff ride that lets you “feel the road”; the Highlander is smooth around town and on the open road at higher speeds.

The 2013 Toyota Highlander Hybrid Limited leaves very little to gripe about and that should come as no surprise as there is no question that Toyota does hybrids very, very well. Like the Prius and the Camry Hybrid, the Highlander Hybrid offers power, efficiency, ride quality and surefootedness that puts it at the top of its class.

The Final Word
The one key downside to the 2013 Toyota Highlander Hybrid relates around the fact that having this proven hybrid technology and true sport utility vehicle capabilities comes at a cost – almost $50,000 to be exact ($49,057 as tested). However, when you include in the $1,760 rear entertainment system and wireless headphones (both of which are factored into the aforementioned price), there is very little else that you could ask for…even in a luxury SUV. The Highlander Hybrid drives and rides great, getting impressive fuel economy for a vehicle of this size with plenty of space inside for both cargo and passengers. If you are in the market for an SUV that can offer seating for 7 (with a few of those being children) and real seating for four large adults that also offers great fuel economy, all wheel drive, plenty of power and just about every modern interior amenity - this could be the vehicle for you. In the end, it can be argued that no one does hybrids as well as Toyota so it should come as no surprise that the Highlander Hybrid is one of the best super-efficient SUVs I’ve driven.

John Goreham wrote on March 21, 2013 - 6:00pm Permalink
I'm wondering if Toyota would consider offering both this hybrid drive and also the one from the ES300, which starts with a four cylinder engine in the next gen, 2014 coming soon. Your thoughts? That would be bold.

Tesla Contemplates A New Strategy for China Retail even As Sales Boom
Jay Leno on Elon Musk & EVs: “I Think He Should Get ... Credit"
END_OF_DOCUMENT_TOKEN_TO_BE_REPLACED