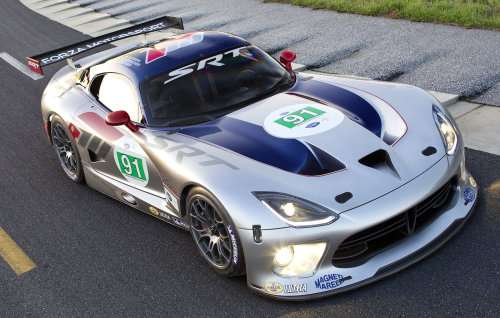 When the 2013 SRT Viper was introduced in New York earlier this month, SRT President Ralph Gilles also introduced the world to the new Viper GTS-R that would help bring the Viper back into the factory-based racing world and it’s now official that the Viper’s glorious return to racing will take place on May 12th when the American LeMans Series takes to Laguna Seca Raceway.
Advertisement

Ralph Gilles explained at the debut of the 2013 SRT Viper and SRT Viper GTS-R that the race-only GTS-R would re-introduce the Viper name to the world of endurance racing via the American LeMans Series (ALMS). Unfortunately, the Chrysler exec didn’t state at what point in the ALMS season the Viper GTS-R teams would join the GT field but the SRT Viper Facebook page posted earlier today that the Viper would make its high profile return to the racing world in 17 days – at the American Le Mans Monterey Presented by Patrón at Mazda Laguna Seca Raceway.

UPDATE: We spoke with a member of the SRT team who let us know that the post on the SRT Viper Facebook page was incorrect and that upon the request of the company - that post was removed. It looks as though the Viper GTS-R will not make its debut at Laguna Seca but it will arrive sometime later in the year. in any case, race fans can expect to see some great racing on the weekend of May 10-12th.

The 2013 SRT Viper GTS-R will enter the production based GT class in the American LeMans Series that is currently led by the BMW E92 M3 piloted by Joey Hand and Dirk Muller. Other familiar teams in that class include the Chevrolet Corvette ZR1 driven by Tommy Milner and Oilver Gavin, the Ferrari 458 Italia entry driven by Scott Sharp and Johannes van Overbeek and a variety of other teams competing in Porsche 911 RSR, Ferrari 458, Corvette ZR1, Aston Martin and BMW E92 race cars. According to the ALMS website, there are 11 driver pairings in the GT class that have competed in the first two events of the season, first at Sebring and then at Long Beach. The GT class has ten teams who have competed in the first two events with BMW Team RLL and Corvette Racing sitting tied for first place with 40 points each.

SRT Motorsports will field two teams in the American LeMans Series GT class with the 2013 SRT Viper GTS-R with an experienced driver core of Dominik Farnbacher, Marc Goossens, Ryan Hunter-Reay and Kuno Wittmer working together to help the Viper return to racing fame.

The American Le Mans Monterey Presented by Patrón at Mazda Laguna Seca Raceway is a six hour endurance race in which the teams (each consisting of two drivers) compete to see who can complete the most laps during the allotted time period. Like other ALMS races, the American Le Mans Monterey will have five different classes of race cars on the track at one time, with the P1, P2, PC GT and GTC cars all competing with each other for track space as they attempt to be the overall winner and the winner of their individual class. The overall race winners are typically vehicles in the LeMans Prototype P1 class but there have been times in the past where the mighty Viper took home overall victories in high profile endurance races. In the two hour long American LeMans at Long Beach, the overall winner (HPD ARX-03a race car) finished 86 laps while the best-finishing GT car was the Chevrolet Corvette ZR1 driven by Tommy Milner and Oliver Gavin – just two laps behind the overall winner.

The encore presentation of the American Le Mans Monterey Presented by Patrón at Mazda Laguna Seca Raceway will air on ESPN2 on Sunday, May 13th at 5:00pm eastern standard time. Those racing fans who want to catch the racing action live can use their Xbox 360 to view the race as it takes place on ESPN3. The race is set to begin at 4:30pm EST on Saturday May 12th with qualifying running on ESPN3 on Friday the 11th at 7:40pm EST.

Hopefully the 2013 SRT Viper GTS-R returning to racing on May 12th means that we will soon know more about the new Viper race program. The pair of factory-backed Viper racers was prepared by Riley Motorsports but little else is known about the 2013 GTS-R. The GT class has a horsepower limit of just 500hp so, like the Chevrolet Corvette ZR1 teams, the Viper will actually have to be de-tuned for ALMS racing.