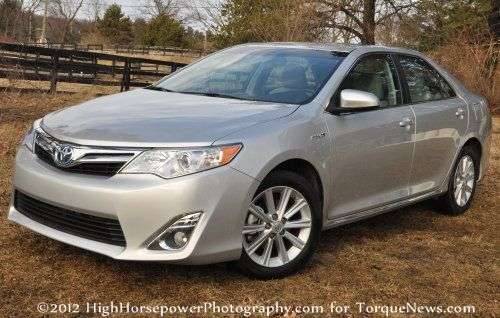 I recently logged over a thousand miles on a 2012 Toyota Camry Hybrid XLE – the top of the line fuel sipping version of Toyota’s top selling midsized sedan – and while the new Camry Hybrid packed all of the amenities that you would expect from the range topping trimline, it was the performance of the hybrid drivetrain that really impressed me the most.
Advertisement

I should start my review of the 2012 Toyota Camry Hybrid XLE by saying that I am a fan of high performance cars and trucks that provide inspired driving – presumably with nice, loud V8 engines. While my tastes lean towards muscle cars, I have an appreciation for performance cars of all types and from all corners of the world. As you might guess from that lead-in, the 2012 Camry Hybrid was not a vehicle from which I expected any inspired driving. I have spent a whole lot of time in hybrids and other non-hybrid 40+ mile per gallon vehicles recently and while those all offer great fuel economy; they often do so at the expense of performance measures like acceleration and top speed (with the exception of the Fisker Karma). However, the 2012 Toyota Camry Hybrid does not suffer from this problem with very impressive acceleration from a stop and at cruising speeds around town. From the first few minutes I spent driving the 2012 Camry Hybrid, I was impressed by how strong the drivetrain feels in almost every driving situation.

The Drive
The 2012 Toyota Camry Hybrid XLE is powered by a 2.5L 4-cylinder gasoline engine making 156 horsepower and 156lb-ft of torque paired with an electric drive motor that sends 141 horsepower and 199lb-ft of torque to the continuously variable transmission (CVT). When the electric and gasoline units are working together, they produce a total of 200 horsepower and while that doesn’t seem like much power, the 2012 Camry Hybrid makes very good use of the available thrust. The Camry Hybrid is very strong from a stop and unlike some hybrid cars that are sluggish and heavy feeling the Camry Hybrid is ready and willing to get right up to cruising speed; with enough power to spin the tires when leaving a stop light in a hurry.

Another place that many hybrids can struggle is passing at higher speeds on the highway and Toyota boasts of how well the 2012 Camry Hybrid does that in one of their television commercials – showing the Camry blasting around a group of sport bikes on the open road. For those familiar with sport bikes, this is a very obvious exaggeration but when you are cruising at highway speeds and you see the need to step out into the fast lane and put the hammer down, the Camry Hybrid’s drivetrain is quick to respond. The CVT transmission adjusts quickly to increase the drive gear as the engine RPMs soar and in my opinion, the Camry Hybrid accelerates to (and well over) 100 miles per hour quicker and more easily than any hybrid I’ve driven.

I understand that there are a great many hybrid owners or prospective Camry Hybrid buyers out there who aren’t all that worried about how well their midsized sedan launches from a stop, nor do they care if their car will break the 100mph mark. The bottom line is that the 2012 Toyota Camry Hybrid offers impressive acceleration and more than enough top speed for the average driver – while also offering very, very good fuel economy figures for a car of this size. During my time in the Camry Hybrid, I averaged 41.1 miles per gallon with a comfortable mix of city and hybrid driving; all the while making the most of the impressive acceleration capacities and occasionally testing the high speed capabilities (the top speed is electronically governed to 117 miles per hour). Not every hybrid owner really cares if their sedan will dash from 0-60 in 7.3 seconds nor will they ever go anywhere near 117mph but in a hybrid segment where so many of the drivetrains pull power in the name of fuel economy – the 2012 Camry Hybrid balances fuel economy and impressive performance measures. In addition to featuring an EPA rating of 43mpg around town and 39 on the open road, multiple sources have found that the 2012 Camry Hybrid can run the quarter mile in right around 15.5 seconds.

The Design
Another area where Toyota spent improving things for the 2012 Camry Hybrid was the interior and it shows with the level of comfort in the new midsized hybrid sedan. My 2012 Camry Hybrid XLE was loaded to the gills, which included a leather interior package that dresses up the seats and door panels while also adding power front seat controls, a power tilt/slide moonroof and the top of the line Toyota Entune premium navigation/infotainment system featuring a 7” touch screen, HDD and a JBL 10 speaker sound system. This infotainment package also features iPod integration, Bluetooth connectivity, steering wheel mounted controls, Sirius satellite and HD radio.

The 2012 Toyota Camry Hybrid XLE offers lots of high tech gadgetry in an easy to use package but more importantly, there is lots of room for the driver and passengers. Even when the front seats are moved back all of the way, you have more than enough leg room for children or shorter adults and with a 6 foot tall driver seated comfortably in relation to the steering wheel, there was enough room for a 6 foot passenger behind the driver.

The Final Word
The Toyota Camry is one of the bestselling cars in the US market and the interior amenities of the 2012 Toyota Camry Hybrid XLE are exactly what you would expect in this day and age from a top of the line, affordable midsized sedan. With a suggested retail price of $34,480, my test Camry was at the top of the price scale but there really isn’t much that isn’t included for that price in terms of modern gadgetry and conveniences. On the outside, the Camry Hybrid reflects the changes of the other Camry models for the new generation of the popular sedan with a sharpened look compared to the outgoing models but for me – the big news with this car is the drivetrain and the level of performance.

Mind you, the 2012 Camry Hybrid is going to be hurting the feelings of muscle car owners during an impromptu drag race from a stop light but unlike many hybrids that suffer in the performance department, the new Camry Hybrid offers a respectable top speed and enough low end acceleration to merge into fast moving rush hour traffic without the concerns of being run over. The Camry Hybrid offers a very honest 40+ miles per gallon without sentencing the driver to an existence of being stuck in the fast lane because your hybrid doesn’t have the brass to step out into the fast lane.

If you are looking for a hybrid that offer great fuel economy at the expense of boring, sluggish driving but you don’t want to foot the bill of some of the higher end sport hybrid models – the 2012 Toyota Camry Hybrid is definitely one vehicle that you should test drive before making any decisions. Some consumers base their purchases on the look and specification of a car but in the case of the new Camry Hybrid – the car offers more “wow” factor for the driver than almost any hybrid I have driven.

Anonymous wrote on March 19, 2012 - 9:50pm Permalink
I own a 2011 Toyota Camry Hybrid and yesterday went to look at a new 2012 Camry since I was interested in the improved fuel efficiency of the new model. The dealer told me they would have the Hybrid next month. I did however have a chance to inspect the new 2012 Camry. What was shocking was the cheap look of the interior. Black vinyl everywhere, cheap looking leather and a center console that was black plastic, looked it not to mention the fake rose color plastic wood looking really cheap! All in all the cabin seemed clausrtophobic and dark compared to my 2011. I'll wait an see if there is any improvement in the 2012 Hybrid model, hoping for the best, otherwise I'll stick with my 2011 and enjoy the ride!
Anonymous wrote on March 29, 2012 - 12:57am Permalink
I'm in exactly the same situation and had the same feelings regarding the interior on the new 2012 Camry. Dark, claustrophobic and cheap looking! And the fake wood? REALLY FAKE! Hopefully the Hybrid might look better inside otherwise I'll stick with the 2011 and enjoy.
Anonymous wrote on April 10, 2012 - 10:56pm Permalink
We had our fully loaded 2012 Camry XLE Hybrid special ordered at the factory, because we could not find the color we wanted, with the options, in our region. The car arrived in a month or so, exactly the way we wanted it. It is Sandy Beach Metallic with Ivory leather interior. Nothing dark about the interior at all. The 'wood' trim in Camry XLE Hybrids is not brown, but a light, futuristic silverized wood look. As noted well in the review above, the power is amazing. Torque is surprising. The build quality is very good. Very roomy. Everything works well. We are averaging over 40 mpg in mixed freeway and street driving, but we have had short trips of say 20 miles of all street, where we averaged 50 mpg. Note Consumer Reports 4/12 rated the Camry Hybrid as the number one recommended midsize family sedan. And it is overall five star rated in crash testing.
Anonymous wrote on April 10, 2012 - 11:20pm Permalink
Thanks for the comments. I have no qualms about the techical side of the new Camry. Sounds like you have a much nice version in the US than what is being offered in Thailand. The version here, while having ivory leather, has black plastic trim near the windows and the dash is a mass of black plastic. Fake wood can only be described as a very fake looking simulation of rosewood. Maybe I can special order and get something decent looking? Thanks again for your feedback.