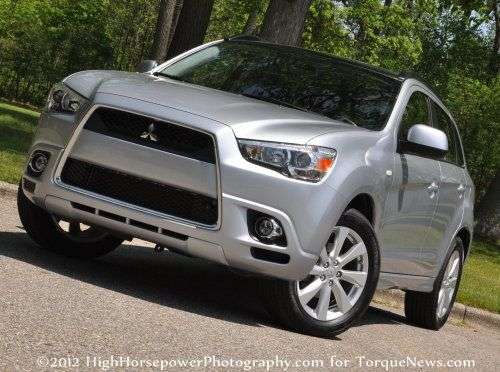 The compact sport utility vehicle segment is packed full of popular models but the Mitsubishi Outlander Sport is one that shouldn’t be overlooked by prospective shoppers as it carries a low price and a surprising number of amenities even in lower level trimlines.
Advertisement

The Mitsubishi brand has seen better days in the US market but the company has put a tremendous amount of R&D (and stock) in their current sport utility vehicle lineup and that is a point illustrated well by the 2012 Mitsubishi Outlander Sport. While the Outlander Sport may be overshadowed by stronger selling models like the Ford Escape and the Honda CR-V, the fact that fully loaded Outlander Sport costs only slightly more than the entry level 4WD Escape and slightly less than the entry level 4WD CR-V while also achieving similar fuel economy should be reason enough for new SUV shoppers to check out the Outlander Sport. Our loaded up 2012 Outlander Sport carried a sticker price of $28,155 which includes the top of the line SE AWC package, a CVT transmission, the premium package and the navigation package. This loaded price of the Outlander Sport is similar to the pricing of the mid-level Ford Escape and Honda CR-V, before you add any options to those two models.

The Exterior
On the outside, the 2012 Mitsubishi Outlander Sport offers a design that is very similar to the larger Outlander and the sporty Lancer lineup. This includes a headlight design that gives the Outlander Sport a scowling, aggressive look with heavily chromed out bezels around the projection headlight system. Like the Lancer and Outlander, the Outlander Sport has a large central grille opening that runs from the hood to the lower fascia and widens as it gets to the bottom of the vehicle – with a chrome trim piece running around the perimeter of the cooling opening with a body colored strip dividing the upper and lower portions. The lower portion of the front fascia carries a set of chrome fog light housing in black bezels with a collection of air openings scattered across the front end. While the overall shape of the Outlander Sport does a fine job of wearing the “sport” designation – the front end is a big part of the sporty attitude of this small SUV.

Along the side, the 2012 Mitsubishi Outlander Sport has a design with lines that rise as the near the rear end, including the upper body line and the lower defining line of the side windows. The way that these lines run up towards the downward tapering roofline gives the Outlander Sport a sleek look while also forgoing the bulky feel that you get with many SUVs. The wheel wells have a slight flare to them with a contrasting flat face against the curvy body with 18” aluminum wheels filling those wheel openings. Most importantly, while the Outlander Sport does not sit high in the air like many SUVs, it still has plenty of ground clearance for conquering the urban jungle. The shortish roof line combined with the blackened B and C pillars almost give the Outlander Sport a coupe look at certain angles – furthering the “bigger than I look” design.

Out back, the 2012 Mitsubishi Outlander Sport has angular tail lights that offer just as much attitude as the front lights with predominantly red lenses pointing in toward the license plate and the chrome Mitsubishi three-diamond logo. The lower rear fascia has a hard dividing line similar to the one up front with a sporty inward-angling design wrapping around the polished exhaust tip. Along the top of the rear end the Outlander Sport wears a subtle spoiler hovering over the angled rear glass – both of which accentuate the sporty nature of this compact SUV.
Overall, the exterior design of the 2012 Mitsubishi Outlander Sport works very well to emphasize the “sport” portion of the name. The design of the front and rear fascia, the upward running lines along the side and the low, stalking stance make this a great looking compact SUV. In a segment where many models can fade into obscurity due to overly vanilla exterior design, the Outlander Sport stands out with a silhouette that is much smaller than the competition – without compromising interior comforts.

The Interior
Inside, while the 2012 Mitsubishi Outlander Sport doesn’t offer leather seats – there isn’t much else that isn’t available. Out Outlander Sport SE AWC was fitted with the navigation with rearview camera package and the premium package. The premium package adds the gorgeous panoramic glass roof with LED illumination, a large touchscreen display that controls the various infotainment functions, an auto dimming rear view mirror, a rear camera system and an absolutely incredible Rockford Fosgate Punch premium sound system with 9 speakers including a 10” subwoofer and 710 watts of amplified power. The sound system works with CD, AM/AF/ satellite radio and USB connectivity and this premium sound system hits hard than your average aftermarket sound system – a real audiophiles dream come true. Also, if you don’t want to take your hands off of the steering wheel to change the track or radio station, the Outlander Sport SE AWC comes with standard steering wheel mounted controls for the infotainment system, the hands-free phone system and the cruise control. Most importantly, the infotainment system in the 2012 Outlander Sport is very easy to use with no real learning curve so new owners won’t have to take a class at the dealership to learn how to use their radio. The Outlander Sport features automatic climate control but unlike some HVAC systems that are brutal buttonfests, the Sport features three basic knobs with temperature, fan speed and fan direction with auto modes for those last two.

The 2012 Mitsubishi Outlander Sport does not offer leather seats but the SE AWC model comes with black “sport cloth” seats with heating elements for the driver and front passenger. The seats are comfortable but with deeper leg and side bolsters, these seats fit the sport designation. There is a ton of leg room and head room for the driver and front passenger with enough seat adjustment range to comfortably seat a pair of 6’3” front riders without completely crushing the folks in the back seat. The amount of elbow room between the driver and front passenger is a little tight and two bigger people up front might be battling for space on the small central armrest but for a car with such a small silhouette, it has far more headroom and leg room than I first expected. The back seat is a little bench-like and even though pretty much every compact SUV sports a rear bench, some have a design that gives them a more bucket-like shape where the Outlander Sport has a more traditional back seat design. However, there is once again plenty of legroom (especially for kids) and when you don’t need to rear seating room, the 6-/40 back seats fold down to significantly increase the cargo room. Even with the rear seats in the upright position, the Outlander Sport still has a nice, big rear cargo area with the Rockford Fosgate subwoofer mounted well out of the way in the rear side cladding with a metal grate protecting this hard-hitting speaker from damage if any cargo slides around back there.

Finally, one feature that cannot be ignored is the panoramic glass roof of the 2012 Mitsubishi Outlander Sport, which is included in the $2,050 Premium package. This glass roofline stretches well into the rear seating area so that everyone in the vehicle can enjoy the sky view and when it gets too hot, there is a power sunshade that covers the entire glass portion of the roof.

The Drive
The 2012 Mitsubishi Outlander Sport SE AWC is powered by a 2.0L MiVEC 4-cylinder engine mated to a continuously variable transmission (CVT) and an advanced Mitsubishi all wheel drive system. This configuration provides 148 horsepower and 145lb-ft of torque while coming with expected fuel economy measures of 23mpg around town, 28 on the highway and a combined figure 25 miles per gallon. During my time with the Outlander Sport, when cruising on the highway in 2WD mode (controlled by a knob on the shift console), I found that this compact SUV was getting closer 30 miles per gallon when traveling at 65-75 miles per hour. Overall during the course of my time in the Outlander Sport, I averaged 24.8 miles per gallon. This is a shade under the prescribed combined figure of 25mpg but there was plenty of spirited driving that I know cut into my fuel economy numbers around town.

The power output of the Outlander Sport is a little lower than comparable models (such as the Escape and the CR-V) but the Mitsubishi SUV makes good use of the available power – helping it to not feel underpowered like some SUVs on the American market. This power output is more than enough to allow the Outlander Sport to comfortably cruise at highway speeds and when you put the pedal to the floor, the 2.0L engine provides enough grunt to allow you to step out and blow by slower moving traffic.

When driving the Outlander Sport, it doesn’t feel like an SUV but more like a midsized car although the ride is a touch more rigid than your average midsized hatchback. However, this is a sport utility vehicle and I found the ride quality to be right about what you would expect from a compact SUV with a fair amount of “road feel” when cruising but at the same time – the Outlander Sport feels fairly light and nimble when hitting the turns. The electronically assisted steering system has a good feel to it, removing some of the road vibration without deadening driver’s contact with the road.

The 2012 Mitsubishi Outlander Sport is fitted with a CVT transmission and, truth be told, I have come to hate this type of transmission. However, Mitsubishi has done a fantastic job of tuning in “shift points” that make this CVT feel far more like a traditional automatic transmission and this is accentuated by the large, sporty paddle shifters mounted behind the steering wheel. These paddles allow for some faux gear banging fun, giving the driver a pretty firm control over the shift points. To some, this feature might not be something that they care much for but I really enjoyed the shifting system of the Outlander Sport and during my time driving this compact SUV, I found myself shifting more often than not. Mitsubishi has really done a great job making their CVT system one of the best that I have driven on a non-hybrid – especially in an SUV.

The Final Word
Our 2012 Mitsubishi Outlander Sport SE AWC came pretty much loaded with the only “luxury feature” not included being the option of leather seats. However, for someone who doesn’t like leather there is really nothing else to ask for from the Outlander Sport. The premium sound system is incredible, the controls are easy to use, the navigation system works very well (again, with little learning curve) and there is plenty of room – for passengers and cargo. On the outside, the Outlander Sport has a sleek, aggressive design that helps this model deserve the sport designation but while this compact SUV has a smaller exterior form – it does so without minimizing interior space. Add to that the efficient drivetrain, the advanced all wheel drive system and all of the interior goodies for a price just over $28,000 – the Outlander Sport proves to be one of the better bargain buys in the compact SUV segment.