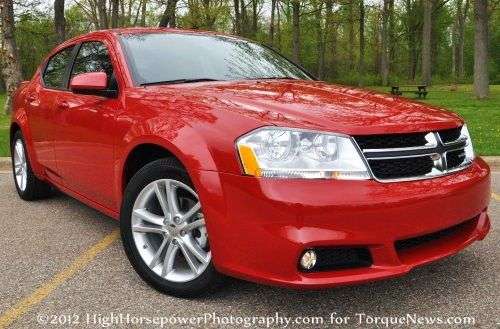 The 283 horsepower Pentastar V6 was previously only available in the 2012 Dodge Avenger in the pricier SXT Plus or R/T trimlines but the Chrysler Group has just announced the new Avenger SE V6 package - bringing the power of the 3.6L V6 and almost 30mpg to the entry level midsized sedan.
Advertisement

The 2012 Dodge Avenger has previously been offered in the SE, SXT, SXT Plus and R/T trimlines – with the SE and SXT coming with the 2.4L 4-cylinder while the SXT Plus and R/T come with the Pentastar 3.6L V6. This package packs the 283 horsepower V6 into the Avenger with an MSRP of $21,495; the same price as the one currently listed on the Dodge website for the 2012 Avenger SXT that comes with the 173 horsepower 4-cylidner engine. Previously, Avenger buyers would have had to pay $23,995 for the SXT Plus model if they wanted the 283 horsepower mill (that also offers 29mpg) so the new SE V6 package proves to be a great bargain – saving buyers $2,500 compared to the SXT Plus. The 2012 Avenger SE with the 2.4L 4-cylinder carries a starting price of $18,995, so this SE V6 package adds $2,500 over the base model SE.

“The Dodge Avenger is one of the fastest growing mid-size cars in America, with sales up 112 percent this year,” said Reid Bigland, President and CEO – Dodge Brand. “We’re building off this momentum with the introduction of the new SE V6 package, delivering a true no compromise solution for the mid-size car buyer – 283 best-in-class horsepower, 29 mpg highway, 18-inch wheels and a rear spoiler – all for just $21,495 MSRP. You get the power, the efficiency, the look and tremendous value that is unmatched in the segment.”

The Dodge Avenger has been one of the Chrysler Group’s fastest growing models through the first two months of 2012, with an increase of 112% compared to the first two months of 2011. In addition to offering 283 horsepower and 29 miles per gallon on the open road, the Avenger was also named one of the Insurance Institute for Highway Safety’s (IIHS) Top Safety Picks for 2012. The increased power an exceptional fuel at such a low price in the Avenger SE V6 could help the sporty midsized sedan continue to grow in the segment against hugely popular models like the Ford Fusion and the Toyota Camry. In offering this low priced SE V6 package, the 3.6L Pentastar should show up in more examples of the Avenger – packing gobs of power and great fuel economy in the heated battle of midsized sedans in the US.