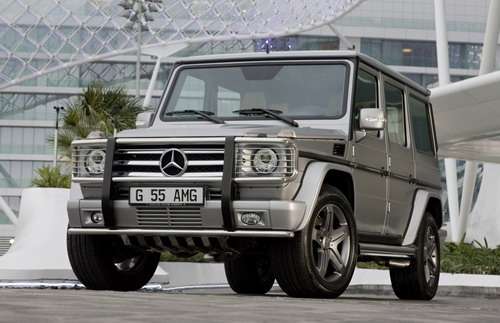 AMG, the Affalterbach-based official tuner of Mercedes-Benz, is supposedly working on a G 65 AMG super offroader version of the mighty Gelandewagen.
Advertisement

The AMG tuning house was co-founded back in 1967 by Hans Werner Aufrecht and Erhard Melcher, who were former Mercedes-Benz engineers, in the town of Burgstall, near Stuttgart. The company began working on modifying series models produced under the Three-Pointed Star brand in order to create some of the most spectacular sports and racing cars of the century, such as the 300 SEL 6.8 AMG or 450 SLC AMG. In 1976, the company headquarters and facilities were moved to Affalterbach, the current location. In the 1990s, Daimler initiated the process of acquiring stakes in the tuner and, in 1999, bought 51% of the total shares and renamed the firm to Mercedes-AMG GmbH. In 2005, Hans Werner Aufrecht sold the remaining part and AMG became a subsidiary of the German automotive concern; he now rheads the racing development department entitled HWA that functions at the traditional location in Burgstall.

On the other hand, the Gelandewagen (or, better known as G-Class) began its prodigious history in 1979 as a solid cooperation between Mercedes-Benz and Magna Steyr. The powerful and robust machine with supreme offroad capabilities is still a very attractive choice in the SUV segment nowadays, though more than 30 years passed since it saw the light of day at the Graz factories, the production site that has been secured until the end of 2015. Days ago, we were announced that Mercedes-Benz will be releasing two special edition for the G-Class: the "BA3 Final Edition" for the short-wheelbase version, to mark the end of assembly for that variant, and the G 500 "Edition Select", both of which showcase an impeccable design and upscale appointments to pamper the exterior and interior.

Moving on to the serious business, the first super G-Class came out in 2002, when Mercedes-AMG issued a limited series of G 63 AMGs powered by a V12 power-plant with a massive output of 444 hp. There are hints that a few G 65 AMG units were also built in that period, to emphasize the company's program for clients who desire to have their one-of-a-kind AMG vehicle. The mass-produced G 55 AMG KOMPRESSOR was revealed in 2004 and along time, it was constantly updated to keep it fresh. The performance figures went up from 360 hp to 507 hp in 2008, to celebrate the release of the face-lifted G-Class range.

There are hints that Mercedes-Benz will once again rehaul the Gelandewagen towards the end of this year or in 2012 and now an unexpected rumor emerged, as insiders claim a hardcore G 65 AMG version is currently under development. If the suspicions are true, then the offroader could receive the 6.0 liters twin-turbo V12 powerplant, that was recently tweaked and is now able to achieve 630 hp. Obviously, the tuner won't roll off too many examples of the above-mentioned G 65 AMG and it's a pity to mention the price tag will be extremely prohibitive, if this model really comes out in the end.