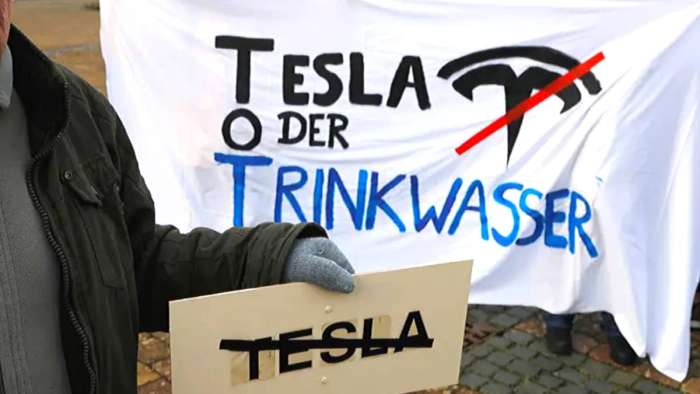 What’s Disputed for Tesla Giga Berlin and What’s Next

In this news update about the Tesla Giga Berlin I am going to look at the facts, talk about the risks and opportunities for Tesla in Berlin. Deforestation, water consumption, workers' rights: there are many criticisms of the Tesla factory that is to be built at Grünheide. German RBB24’s Philip Barnstorf has published a nice story with a fact check and an inventory of the risks and opportunities that Tesla’s huge Gigafactory 4 project entails.
Advertisement

Half a million electric cars will soon roll off the Tesla Giga Berlin assembly line in Grünheide, manufactured by up to 12,000 employees. It could be the largest industrial settlement in Brandenburg since the turn of the century. The hopes around the Tesla factory are gigantic: There is talk of the re-industrialization of the East. And this time it should be environmentally friendly with Brandenburg as a pioneer in the energy and transport transition. On the other hand, citizens fear increasing traffic, some environmental groups criticize deforestation and unions warn of exploitation in the workplace.

But which hopes are justified, which fears are to be taken seriously?

In November Tesla boss Elon Musk announced the construction of a Gigafactory near Berlin, and in December an application for a building permit of almost 2,000 pages had already been submitted to the State Office for the Environment.

These documents have now been displayed by Thursday. There were about 270 objections to the Tesla Giga Berlin plan by Thursday evening. The deadline for objections ended at midnight. All of these appeals will be discussed publicly in Erkner at 10 AM on March 18. For this, the city administration blocked the city hall for two days. After all, only 800 people fit in there.

Only after this hearing can the State Environment Agency issue the building permit for Tesla Giga Berlin. The building permit is expected to come by this summer. However, if the approval of all the authorities involved is likely, the State Environment Agency can allow so-called "early action" earlier. Because of this, Tesla has been able to clear 90 hectares of forest. However: If, contrary to expectations, the building application is not approved, Tesla must plant the forest again at its own expense. The Giga Berlin's groundbreaking ceremony would also be such an early measure. It is scheduled to take place in the second half of March.

The current building application only includes the first stage of expansion of the factory. The Tesla plant could grow with further expansion stages. However, new approval documents would then have to be submitted and approved for this. The company wants to make further expansion stages dependent on the success of the factory. In fact, currently the Gigafactory Shanghai is expanding with a new phase of construction.

The Pine forest originally covered the 300 hectares of the Tesla property. For the first stage of expansion, 90 of these have been cleared in recent weeks. Another 60 hectares are to follow in the Fall. Around 200 people, many from the Tesla-critical citizens' initiative, have repeatedly protested the clearing of the pine forest. The NABU local association is also critical of the clearing. Members of the Green League and a Bavarian club that also criticized renewable energies had interrupted the clearing work in the meantime by urgent application.

The fact is, however, that the vast majority of nature conservation associations consider deforestation of the pine trees to be ecologically justifiable if new trees are planted elsewhere. By law, Tesla is required to replant the cleared forest elsewhere. The Brandenburg Area Agency has already found areas all over the country for this. These mixed forests on Brandenburg sandy soil are rather unusual and ecologically more valuable than the otherwise common pine forests because more animal species find a home here.

Tesla has also announced that it will upgrade the forest in Brandenburg beyond this legally required level. Overall, a balance ratio of three to one is aimed for.

In the partially cleared forest on the Tesla site there are some endangered animals that have to be relocated. Almost 400 of the felled trees were suitable as bat habitats. To compensate, Tesla plans to install around 400 bat boxes in neighboring forests. Bats were actually hibernated in four trees. These trees have therefore not yet been felled. When the bats wake up, they should be moved to the new nesting boxes in the area.

In the same way, four anthills will soon be relocated. Finally, there are also some lizard species on a former dump. For them, replacement habitats are to be built on neighboring plots of land in which the lizards are then relocated.

Water supply is one of the most controversial issues that provoked fierce opposition from a local citizens' initiative. In the issued approval documents, Tesla specified a maximum water consumption of 372 cubic meters per hour. That is about 3.3 million cubic meters a year, which roughly corresponds to the annual consumption of a city with 70,000 inhabitants.
In response to the local discussion, Tesla has since made improvements and now wants to install air rather than water cooling. This means that the Giga Berlin plant will only consume a maximum of two million cubic meters of water a year.

The local water association Strausberg-Erkner (WSE) currently pumps around ten million cubic meters of water annually, supplying around 160,000 people. The WSE expects that in the future it will not only have to supply Tesla, but also moving industries and a growing population. That is why it applied for permission from the State Ministry of the Environment to mine 18 million cubic meters a year. To do this, it would have to expand its waterworks in Erkner and Petershagen / Eggersdorf. Approval from the state environment ministry is still pending. With this solution, no well would have to be drilled on the Tesla site. That would also be difficult because part of the site is in a drinking water protection area.

The state government is doing its utmost for Tesla. In order to complete the approval process as quickly as possible, the state government created a task force. The economics minister admitted to the leading German-language business newspaper Handelsblatt that the government could not offer such a pace to every company: the staff were missing for that.

The price Tesla has to pay to the state of Brandenburg for the 300-hectare property may also initially seem cheap. A report published in early March sets the price at 43.4 million euros. This corresponds to 14.35 euros per square meter. However, the standard land value for one square meter at the neighboring Freight Brink freight center is 40 euros. You don't have to clear there before you start building. In addition, Freienbrink is already connected to the electricity, water and sewage networks. Tesla still has to lay the lines at its own expense. Finally, the country has been looking for an investor in the property for almost 20 years. That should also have influenced the price.

When it comes to subsidies, the state government repeatedly emphasizes that Tesla is treated in exactly the same way as everyone else. As early as November 2019, the company applied for funding from the state investment bank. If Tesla invests four billion euros in Brandenburg as announced, a good 270 million euros in subsidies could flow according to the generally applicable key. The EU must have a say in such large amounts of funding. The decision will therefore probably not be made until next year, said Andrea Beyerlein from the Ministry of Agriculture. Tesla has also applied to the federal government for funding for battery research. Further subsidies could go to training skilled workers.

Employees at the Tesla plant in Fremont, California, reported 80 hours a week and poor pay. Tesla prevented the formation of a union there. In Germany, too, Tesla had clashed with IG Metall when it demanded higher wages from a German auto supplier that Tesla had taken on.

IG Metall warns that the company can prevent employees from founding a works council. It also fears that Tesla will undermine wages through low-paid Polish work. The Brandenburg Minister of Economic Affairs Jörg Steinbach confirmed to the FAZ that many, but probably not more than half of the workers will come from Poland. Steinbach also explained that Tesla had to face the issues of collective wages and participation. The company merely stated that it "wanted to pay competitive prices and stand out from competitors through special bonuses.”