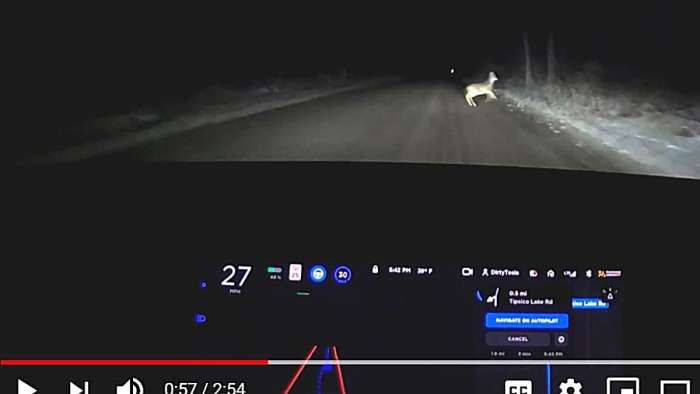 A new video by "Dirty Tesla" Youtube channel demonstrates what Tesla's full self-driving software can do evading a deer in the middle of the night.
Advertisement

Tesla recently delivered the beta version of its "Full Self-Driving" autopilot (FSD) to selected customers. Since then, numerous videos have been released showing the FSD autopilot in action.

Near-accidents are just as much a part of the Tesla Full Self-Driving beta test as well-mastered driving situations. A recent addition to the video collection falls into the latter category.

A video published by YouTuber "Dirty Tesla" shows how the beta software recognizes a deer on the street from a long distance, slows down the speed and Model 3 evades the animal.

"I was driving home and pretty often I come across deer that I have to avoid. And I have been in this scenario a few times, but it's my first time actually capturing it on camera," says the Youtuber. When he saw the deer, in the video he explains how his full self-driving Tesla Model 3 avoided it.

In September, at Tesla Motors' annual shareholders meeting and Battery Day 2020 event, CEO Elon Musk announced that the electric automaker was preparing to release a private beta of the full self-driving driver assistance software in the coming months.

Musk hinted that drivers may soon have the chance to experience this more sophisticated version of AutoPilot: “I think we'll hopefully release a private beta of Autopilot - the fully standalone version of Autopilot - probably in a month. Then people will really understand the magnitude of the change," Musk said. "It's deep. You will see what it looks like, it's incredible."

On October 8, Musk said that FSD's latest version of Autopilot technology would be able to "drive without interference." The limited beta will be available in a few weeks." Four days later, Musk announced that the limited version of the FSD sequel would be available on October 20. Tesla kept its word, and some owners received the capacity to test the Tesla FSD on the appointed day.

It will take some time before the full self-driving package is available for all Tesla drivers and will also depend on the respective laws of the various countries. In any case, the test drivers are obliged to keep an eye on what is happening on the road so that they can intervene in an emergency.

Also, read my latest Tesla coverage, in which Elon Musk reveals his religious values and tells how important it is for him to turn the other cheek, to forgive and to love your neighbor.

Alex wrote on December 6, 2020 - 8:55pm Permalink
Just want to make sure noone thinks there was actually a need to avoid anything here. The deer crossed the road way before the car reached it. The reality is if the deer jumps right in front of the car it will end up on your lap more often then not. That's why people drive trucks to avoid kill zone due to sedans low clearance.