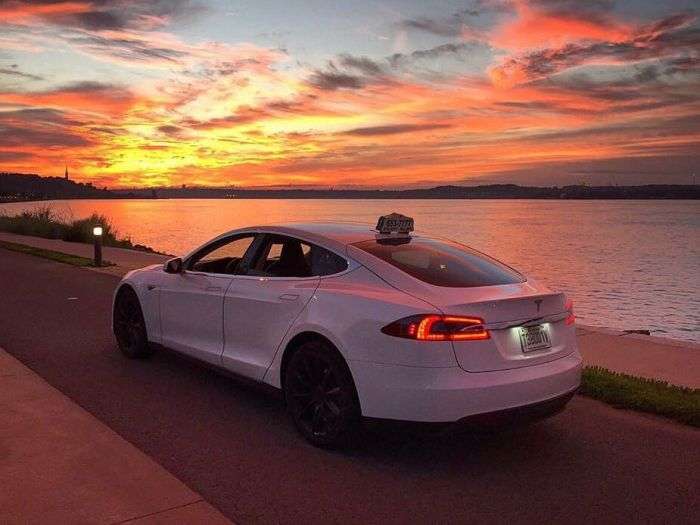 Tesla Taxi: The Best Way to Use Tesla's Reference Program and Make Money

Imagine you call a cab and it's a Tesla Model S. You take a ride in it for the first time and you love it. Then you want one. This could be one of the most effective ways of using Tesla's reference program.

EV taxis are becoming the way to go. They are great in a city setting because chargers are readily available in most cities. Most of the driving is done in a city and it's mostly stop and go driving, which is perfect for electric cars. As you may know electric cars and hybrids don't spend resources when they stop at a traffic light or when they stop for any reason.

Earlier this year, Torque News shared the story of Chris Holmquist who is a Nissan Leaf Uber driver and he converts gas drivers with his rides. After over 8,000 gas-free Uber and Lyft rides, Holmquist has helped multiple drivers get into electric cars through "preaching the electric transportation good news."

Today we share another story and it's about Christian Roy, who claims to be America's 1st Tesla Taxi owner (although operating from Canada).

Few days ago Roy tweeted claiming most his 23,000 clients now are interested in buying a Tesla or a Model S specifically (since his cab is a Tesla Model S 85).

Drive a Tesla Cab and Use The Reference Program From Tesla

Roy could have easily given his Tesla Reference Code to his 23,000 clients and if they were seriously determined to purchase a Tesla Model S they could have used it. Imagine how much money Roy would have made in addition to driving a cab. But he writes in a tweet that he "never annoyed clients with that. Got only one referral years ago, so I got nothing back though." He says he makes about 15 dollars per call on average.

I think electric cars, especially self-driving EVs, will take over the man-driven taxis in the near future. In Japan tests have already started. This Nissan Leaf may become the first driverless Taxi this year in 2018. "The self-driving taxi service, known as Easy Ride, is said to be the first test to take place in Japan's coastal city of Yokohama, and Nissan will work with DeNA, a technology company that develops healthcare, gaming and car networking services," reads the report from Torque News.

Just 2 days ago San Francisco Chronicle reported Uber starting robot taxi service in SF for its own self-driving team. "The 300 local employees of Uber’s Advanced Technologies Group can use a modified Uber ride-hailing app to request one of its self-driving Volvo XC90 sport utility vehicles to take them to and from their new offices at Pier 70 on the city’s eastern waterfront. The free rides, which start Wednesday, will operate only in San Francisco. The purpose is twofold: to give engineers a visceral sense of the technology they’re developing and gain real-life feedback on operating a robot-taxi service — which is Uber’s eventual goal," reports SF Chronicle.

Have you ever been successful in using your Tesla referral code? How much did you earn? Please share your thoughts in the comments section below.