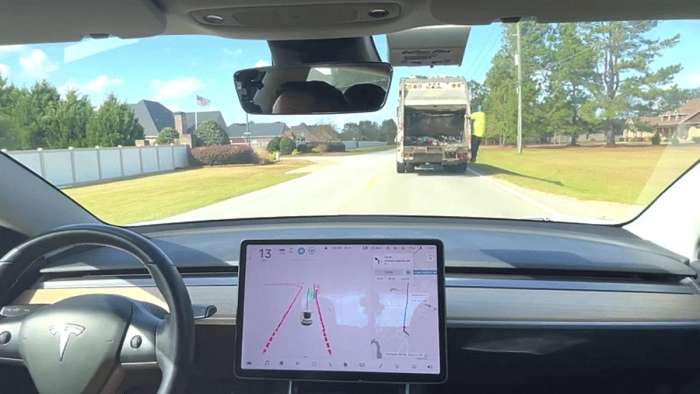 Tesla's Full Self-Driving (FSD) software is getting smarter with each update. Now that Tesla FSD driving is deployed for some users in the United States as a beta test, drivers do not hesitate to film the feats achieved by their vehicles, including this one, in which Dave Mac's Model 3 intelligently passed the garbage truck in front of it.
Advertisement

Dave Mac filmed his Tesla Model 3 cleverly overtaking a garbage truck that made frequent stops by the side of the road. "To a human, this may seem trivial, but not to the Autopilot," writes William Zimmer in Tom's Guide.

Tesla made its Autopilot much more complete by completely rewriting it into Full Self-Driving (FSD). Since then, Tesla has deployed a beta of its fully autonomous FSD driving for a small group of users. Recently, the Tesla updated this feature to make it even smarter. For example, we have seen Tesla's fully autonomous driving detect and avoid a deer in the middle of the night. In fact, see how Tesla FSD is improving.

FSD Overtakes a Garbage Truck Stopped By The Roadside

As you can see in the video below, Dave Mac is driving down a long road and sees a garbage truck in the distance. Once behind it, the Autopilot seems to move steadily to the left to check if the traffic is clear to undertake an overtaking maneuver.

In this video, when the Tesla Model 3 detects other oncoming cars, it pulls back into its lane on its own. Even when the cars may seem very far away, Dave's FSD Model 3 prefers to ensure the safety of the driver and does not initiate maneuvers. It is very interesting to see the car veering slightly to the left lane as a human would scan vehicles coming from the other direction. I think this is normal. As the Model 3 veers to the left, its left camera notices the traffic that is coming through the left lane and detects it for the appropriate action.

It is only after the garbage truck has stopped that the Tesla Model 3 decides to pass it because the opposite l left lane is clear. The Tesla seems to be steering to get back on track quickly, but Dave Mac touches the steering wheel to avoid colliding with the garbage truck.

It is important to remember that Tesla's full self-driving FSD is only in beta at the moment, so the car may make some mistakes. In addition, drivers must nevertheless remain vigilant even if they only have to touch the pedals or the steering wheel in an emergency. In fact, here is a similar instance where Tesla FSD figures out a parked truck and goes around it.