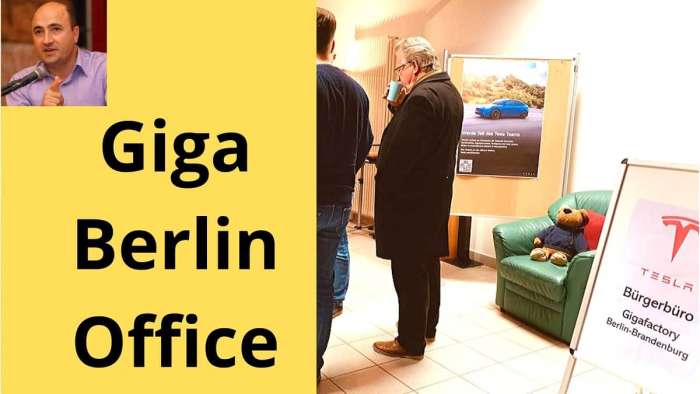 In order to answer questions from residents about the planned Gigafactory in Grünheide (Giga Berlin), Tesla organized citizen consultation hours twice a week in the Brandenburg town from mid-January. Now Tesla is extending those office hours and dates. Here is why.
Advertisement

According to Teslamag, which is a German language Tesla news portal, Tesla is extending its office hours in Grunheide, to address more people’s concerns about Tesla Gigafactory 4 that is being built in Grunheide.

These dates should have actually ended at the end of February, but as the local Tesla host told Teslamag, the electric car company has decided to extend the office hours until the end of March.

After the first public protests against the planned Gigafactory in Grünheide, Brandenburg, Tesla is set up an information office there for the local population to answer any questions they may have about the Giga Berlin and to address their concerns about the forest, the water, the wastewater management and so on. That information had come from the local government. Until the beginning or mid February the local citizens of Grunheide, Erkner or even Berlin, could come the Tesla’s information center and would have the opportunity to ask "questions about the Gigafactory Berlin-Brandenburg construction project" every Tuesday and Thursday from 5 p.m. to 7 p.m.

Tesla’s information center’s location was at the Netz-Werk shop in Grünheide, in front of which there is a suitable electric car charging station. As part of a publicly funded project, various events with a social focus take place there.

The Netz-Werk shop is operated by Grünheid consultant Christine de Bailly. According to her information to teslamag.de, she was only asked about the Tesla project at the beginning of the week. "I guess they asked the mayor beforehand," she said. She then immediately agreed to Tesla's request because she considered it important that the local citizens get "competent answers" to the Gigafactory project.

According to de Bailly, the Tesla information office is likely to be staffed by "two women", whom she has also met briefly. She assumes, but cannot say exactly whether they are direct Tesla employees. Major preparations for the Tesla office hours in her shop are not planned: "We stayed so that the two will come on Thursday." There were no deliveries of furniture or material, nor they were announced that furniture or any office materials would be brought there.

A lot of people were interested to talk to Tesla.

But now, while these hours are extended, unlike at the beginning, the Grünheider Tesla office hours are now only one appointment a week, namely on Tuesdays from 5 p.m. to 7 p.m., reported Christine de Bailly, operator of the network shop, in which Tesla rents for it. A further extension after the end of March was described as possible. This means Tesla may extend the office hours after March, which I am expecting it will, consider such a big resonance that Giga Berlin is making around the world and particularly in Germany.

The first continuation of the office hours took place last week. "There was a lot going on," reports de Bailly. Among other things, many representatives of different companies were there to find out about opportunities to participate in the Tesla project. But there were also several citizens who came to find out more about the question of water supply for the Gigafactory.

Now we know that a company called Arcadis provides the service.
If you go to the Tesla office in Grunheide during its office hours, you will be able to speak to two employees of the project service provider Arcadis. They greet visitors, ask them for opinions and questions, provide answers and record points that cannot be clarified immediately. There is also a white plastic box with a letter slot in the office, where you can drop any questions, feedback and thoughts about Tesla’s Gigafactory 4 currently being built outside of Berlin.

According to the Arcadis employees, all entries are scanned and forwarded to Tesla.

Starting March 18, at 10 AM local time, all the objections against the Giga Berlin will be discussed in the town hall at the community of Erkner. This discussion will take place to examine the course of the project under the German Federal Emission Control Act.

The Mayor of Grünheide and Brandenburg's Minister of Economic Affairs assume that the Gigafactory construction work can begin before the end of March. The Citizens' Office could still be open when the groundbreaking takes place. Currently as Torque News has reported, intensive preparations are underway at the Giga Factory’s construction site.

By the way, at the Tesla’s office, there is also a nice little dog, named Bailly. When TeslaMag visited Tesla’s office in Grunheide the dog was barking loudly, which was unusual. TeslaMag says probably the black clothes of a Swiss colleague may have irritated the calm looking dog.

Willi, as his name and it comes from an animal shelter and is probably a mixture with a lot of German Pinscher in it.

Well, if you live in Berlin area and have any questions about the Giga Berlin, you are welcome to visit Tesla’s office in Grunheide during their office hours and address your questions.

DeanMcManis wrote on March 13, 2020 - 1:33am Permalink
Another wrinkle for Giga Berlin... A report from Germany’s Automobilwoche states that Tesla is bringing its US employees back to the US (translated from German): “But now the California-based electric car maker has ordered its German team back to the United States. Around 30 Americans who are currently working in Berlin are on the way back, according to information from the Automobilwoche. That is a large part of all employees. The background is the spread of the coronavirus in Germany.”