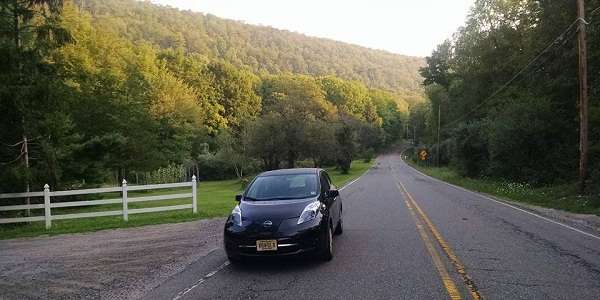 Some Nissan Leaf Owners Say Their Leaf Brakes 'Snatch' at Low Speed, Here Is Why

Does anyone find the Nissan Leafs brakes 'snatch' when braking at low speed? "My husband is convinced it shouldn't be happening, but I'd always just thought it was a quirk of the car," asked one owner on Nissan Leaf Owners' Group on Facebook today, in a discussion about Nissan Leaf brake problems..
Advertisement

Here is what some Leaf owners replied to her in the group about Nissan Leaf's brake problems on low speed.

"Yes. It jumps between regenerative and conventional braking and the transition isn't always smooth. It can be dangerous if you are pulling up behind another car and all of a sudden your rate of deceleration lessons without you reducing brake pedal pressure," replied a user named Darren. He also added that he has never experienced a pulsing (warped rotor feel), but the regen suddenly disengages instead of tapering off as you get slower and it can be quite disconcerting.

Warning about Leaf brakes
"Be careful at low speeds trying to stop with regen only, if you happen upon a pot hole or oddly shaped grate. Regen kicks off leaving you without any stopping power because you aren't using the brake," wrote Nissan Leaf owner named Matthew.

Number of people in the group discussion complain about brakes of Nissan Leaf at low speed. Some say it's the same feeling as having warped brake discs and it's terrible. Other Leaf drivers wrote that they put their vehicle into N and lightly brake. I am not sure how safe is this and is not recommended.

Also see: Does The New 2018 Nissan Leaf Look Matter? Range and Tesla Competition and the Catastrophic Error Nissan is Making with LEAF.

"Pedro Gonzo This past winter it happened to me a lot. Now that the weather is warming up it hasn't happened yet," writes Pedro. But to this, a user named Jimmy replied, writing "don't chance it, replace your 12v lead acid battery. It happened in winter because the battery can't deliver as much current in cold temperatures, but is a sign of impending failure."

A group member Bill says "make sure you have all the firmware updates for the car. Depending on the year, there have been refinements to the braking." He also added that their 2013 Nissan Leaf needed a brake firmware update. "The dealer should be able to check their computer and tell you if yours needs an update," he wrote.

Replace 12v Battery for Better Brakes
Others suggested replacing your 12v lead acid battery ASAP if you ever experience momentary loss of brakes. "Make sure you have completed all brake recalls and service bulletins for your Leaf," wrote Jimmy.

" I have a problem where I'm sitting stopped at a light with constant pressure on the pedal, and suddenly the car starts creeping forward, making me jump to hit the brakes harder and stop the car," reported reported at least 2 members, Brian and Jimmy.

When I posted this story on SF Bay Area Nissan LEAF Owners group on Facebook. People confirmed the brake problems with Leaf. The group is a public group. A User named Kelly Carmichael, wrote that he is already tired for taking his Nissan Leaf for the Nissan dealership for the brake TSBs. "I have been 7 times. The dealer doesn't know what to suggest anymore other than replacing the entire 'controller,' which is basically the entire block of metal under the hood. It costs $7000 dollars and no guarantees that it would solve my issue," Carmichael writes.

It happened to Bill Tomcofic too. He drives a 2011 Leaf. "When it did it was always immediately after charging up to the tippy top of capacity. My theory was the controller sensed that there was nowhere to regenerate to and so it gave the brakes a bit too much to compensate to be on the safe side. But what do I know?" asks he.

Julien Pierre writes in the same place. "I had problems with the brakes. The car would shake every time i would brake at a stop light or red light. I knew it wasn't normal because it didn't do it during the guest year. Living on a hilltop, somehow the brakes got a workout. Dealer could never fix them properly. Was glad to return the leased car."

Dave Davidson has had the same issue and has a solution. "I've had it happen on slick or rough roads. If one of your front wheels lose traction, the regen will kick off to prevent skidding. The first few times it was really scary until I figured out what was happening. Now, if I'm on a road where I think I might lose traction, I use D instead of B. By the way, my Volt does the same thing," he writes.

Have you experienced any problems with Nissan Leaf brakes? If yes, what were those and how did you handle them.

JP White wrote on April 18, 2017 - 6:38am Permalink
For me, I have found a simple resolution to grabby brakes on the LEFA is to rotate (or replace) the tires.
MM wrote on April 19, 2017 - 4:09am Permalink
Yeah, it's quite annoying on my Leaf. Like a lot of cars the Leaf's brakes are over servo'd. I've given up trying to solve the problem.
Nerys wrote on April 19, 2017 - 1:04pm Permalink
My problem is line your title not yoyr article. My brakes snatch. As in they suddenly grab much harder than i am applying them. I know the car has assistive braking and i think my very light usage of the brake pedal instigates this. 3 full presses of the pedal to the floor seems to reset it for a while. Annoying but not dangerous.
Bob Immler wrote on April 21, 2017 - 3:30am Permalink
They seem to be less grabby, when it's not in Eco mode or B mode.
Amanda wrote on January 31, 2018 - 11:29am Permalink
Yes my Leaf is having the same break issues as I've read in the comments. Especially when it's cold. I'm about to have a 16 year old who wants to learn how to drive, but I'm hesitant because car insurance is expensive for a teenager. So what is everyone doing? Returning? Trading in? This is my second winter and when the temp drops below freezing (which often happens between November-March) I feel like a prisoner in my town. EVs are becoming more popular in my area and I can't rely on having a charger available anymore while traveling. But I hate the idea of pumping gas, oil changes, and noisy motors. Sigh. First world problems.
Manoj wrote on February 6, 2018 - 1:31pm Permalink
Yes, my 2011 Nissan Leaf has the same issue "jumps between regenerative and conventional braking and the transition isn't always smooth." Had brake pads checked, brake fluid replaced, and both of these attempts did not fix it. My car has the brake issue even when battery capacity is low. I don't see any correlation of problem when driving on full charge. In fact, is seems to happen less often, which makes sense since car uses only conventional braking and not regen braking when battery is at full capacity.
Jeffrey wrote on February 26, 2018 - 1:00pm Permalink
I just got new tires installed and this issue started happening to be as well. I'm a 2012 owner. I'll going to try changing the fluid as the car sat for a month before I got the new tires. I guess it's also possible the tires are over torqued? maybe?
Darell Dickey wrote on April 9, 2018 - 5:34pm Permalink
I have Leaf # 611. First batch that arrived in the US. Obviously a 2011. The brakes have been wildly grabby since day one, and Nissan will do nothing about it. It has nothing to do with the transition from regen to friction. It has nothing to do with 100% SOC. It has nothing to do with the tires (been replaced twice now). Slapping that brake pedal to the floor a couple of times is the only that that *sometimes* makes it better. And then only temporarily. This annoys the hell out of me, and when I sell the car, I'll have to disclose this defect that Nissan says is perfectly normal. Not happy about that.
MG wrote on May 31, 2018 - 5:58pm Permalink
My 2013 Nissan Leaf SL lost its brakes completely yesterday as I was trying to come to a stop at an intersection, omitted a T-Bone collision by swerving and slamming on the emergency brakes, holly God was that a close call. The brake pedal came all the way to the floor with zero braking action I kept on pumping the brake and nothing, all of the brake warning lights came on the dash at the same time as I pressed on the brakes. The car has a little over 41,500 miles on it. I took the car to the dealer the same day, and today I was told that the brake booster has failed. I was quoted with and over 2K repair from the dealer since the car is out of warranty. How many cars do you know that have a catastrophic brake failure at 40k miles? None that I have ever owned in the past! I have filed a case with Nissan consumer affairs, my life was put in danger by a car manufactures who refuses to address serious issues that are life threatening. I love this car, but depending on how Nissan handles this issue will determine if I ever buy a Nissan product again in my life as the Leaf is my first.
Celine wrote on April 25, 2019 - 7:19am Permalink
Hi all, I am having a lot of issues with my leaf I bought it privately in 2016, it’s a 152 so under warranty Sporadically, when I press the brakes the car surges forward. I have reported this several times to a main dealer. They always state that A there is no issue or B that maybe it was the battery etc When they plug it in, or test drive no fault is found 3 weeks ago I crashed due to this issue, there is never a warning. I have spoken to several people but am hitting blocks everywhere How do you prove something that does not show up? Any advice ??
Maxime Godbout wrote on April 25, 2019 - 12:25pm Permalink
I am experiencing the same with my leaf 2018. Brake mode regen is not working all the time. All of a suddent it would kick off, then I would gain speed. Very annoying. And the brakes will wear faster. Not happy with this

LG's New EV Battery Plant Is a Welcome News for Tesla
Tesla Giga Berlin's New Hurdle: It's Not Only the Gov't, but Now Tesla Itself
END_OF_DOCUMENT_TOKEN_TO_BE_REPLACED