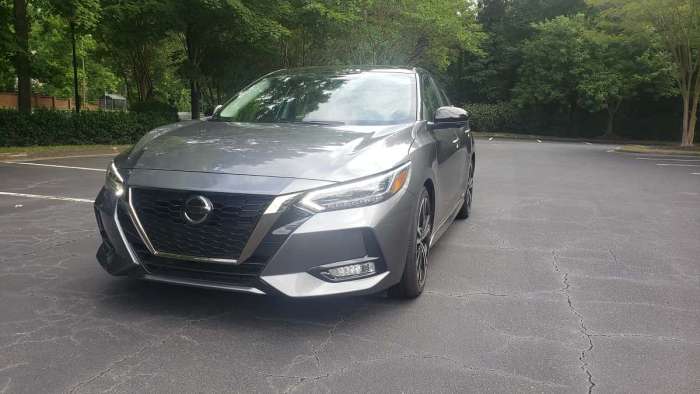 Last year in November Nissan unveiled the eighth-generation Nissan Sentra in Los Angeles. The news 2020 Sentra comes with a more dynamic design and an even more efficient engine.
Advertisement

The redesign of the 2020 Sentra follows on from that of the Maxima and Altima in recent years, which means that the entire range of Nissan sedans has now been updated. The exterior design is significantly more attractive than it used to be, partly due to a more sporty silhouette and a lower seat. The Sentra 2020 will certainly be less anonymous on the road than the previous editions.

When you look at the 2020 Nissan Sentra you will immediately recognize the imposing V-shaped grille that serves as a decisive point for all the lines of the compact sedan. The proportions are changing. It is now 2 inches lower and two inches wider from its previous generation. This gives the impression that it is better camped on its wheels. Obviously, being at Nissan, the Sentra adopts for the first time the famous “floating” roof which gives an additional sporty touch to the car.

When you enter the car one of the first things that surprise you in the interior is the circular air vents that you see in Mercedes-Benz vehicles. Also, it looks like the finish of the interior has made a major leap, especially with stitching on the dashboard. Depending on the version, you will also see accents of tasteful contrasting color. 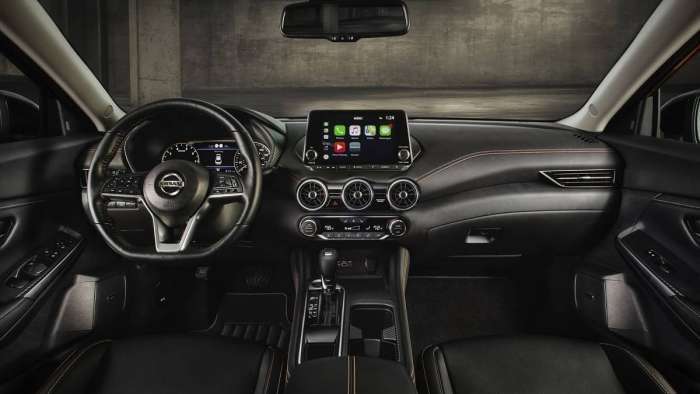 The equipment inside allows the 2020 Nissan Sentra to enter into modernity.

Apple CarPlay and Android Auto are now standard in the 2020 Sentra, available in SV trim and above and can be used via an 8-inch screen mounted on the dashboard. As always, this generation of the Sentra offers a very large cabin for the comfort of all occupants. Nissan is taking advantage of the change in the model to include all driving aids and assistance through the Nissan Safety Sheild 360 program. The package includes emergency automatic braking with pedestrian detection, automatic front, and rear braking, detection driver drowsiness as well as 10 airbags.

Other interesting features include a flat-bottom steering wheel, contrasting stitching, and faux carbon trim dotted around the front cup holders, the top of the dashboard, and various other areas of the cabin.

There is more room in the front than in the Corolla, Civic or Hyundai Elantra, but less in the rear. If we continue to the rear, the Sentra is in the middle of its category with regard to the space of the trunk. The car is fitted with flat-folding seats which can be lowered with a simple maneuver. The headrests cannot be adjusted or removed, but the rear seat remains folded down even if the front seats are almost as far back.

The new 2020 Sentra also offers an excellent driving position. The steering wheel fits well in the hands, the view towards the front is good and although the roof seems somewhat cut - in addition, I had a sunroof, which reduces the space a little more - I could when even wear a hat when seated inside. 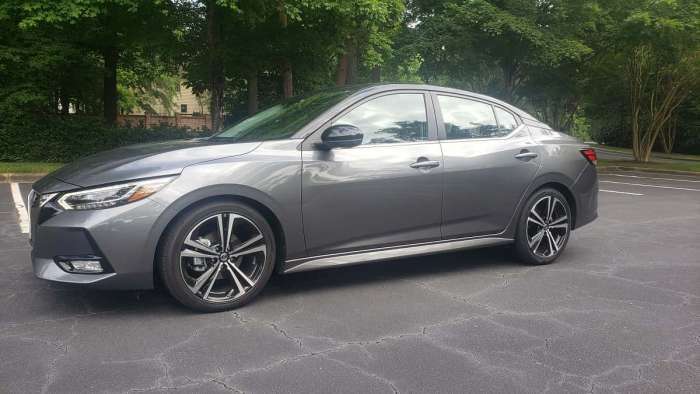 Nissan designers have made good use of the space at their disposal: the central storage bin is deep, that for sunglasses is quite large and there is a surface for your mobile device (just in front of the gear selector), so you don't have to use a cup holder to store it. Unfortunately, if this support seems to be the ideal place for a wireless charging space, the Sentra does not offer this feature, so you have to plug in your phone to charge it and access Apple CarPlay and Android Auto.

Under the hood, there is a strong progression with the integration of a 2.0-liter four-cylinder engine with 149 horsepower and 146 lb-ft of torque. This is a significant gain compared to the 124 horses of the previous 1.8 liters.

The 2020 Nissan Sentra has a sportier appearance, it's well equipped and comes with reasonable pricing. The space in the second row could be improved, as well as the CVT gearbox output with more power at the start.

I think Nissan has just given birth to the best Sentra since 1982, the year of its debut on the market. The last Sentra was not a bad car, but it was invisible. The 2020 Sentra is distinctive and stands out. But Nissan has a challenge. Nissan must both deal with a declining segment and compete with models very popular with consumers, namely the Toyota Corolla, Honda Civic, Hyundai Elantra, and Mazda3. And even the latter, redesigned last year, is struggling.