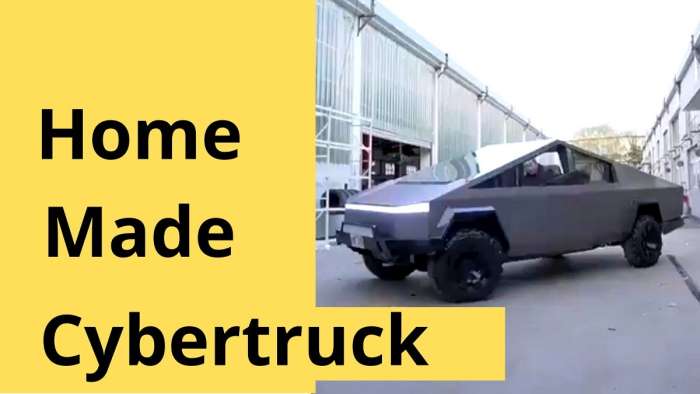 This morning one of my Twitter friends Ray4Tesla shared this interesting video, showing a man from China who built his own Cybertruck. According to Ray this man from China had created an earlier version of the Cybertruck at home, but this Cybertruck 2.0 is more refined. You are about to watch it.

Wow, the man has done a great job building a homemade Tesla Cybertruck. Do you like it? As you can see it's very refined. Apparently it took this engineer 2 months to get it done. It looks like a real Tesla Cybertruck. I wish he showed some interior images. Perhaps the interior is not as refined and well designed as he did the exterior of this Cybertruck. I am assuming he will continue the work on the interior and in a month or two present us a fully refined beautiful Cybertruck with nice exterior and interior. Let's look forward to it.

I applaud this man and his homemade Cybertruck. But as Tesla CEO Elon Musk is fond of saying, making one or two is trivial. Building the assembly line to spit out thousands and thousands is the hard part … exponentially more difficult. But again, I am not saying this to diminish the work of this fine engineer from China. But just pointing why it’s hard for Tesla to build the Cybertruck sooner.

Another Twitter user, after watching this video of the homemade Tesla Cybertruck wrote, “the geometry is off, but I think it's really cool this guy made it happen. It shows a lot of resourcefulness, inspiration, and excitement about the future.” Indeed, the proportions look off a little bit, but he has done a great job building his own Cybertruck. I don’t know if he is using some electric batteries or this one is gas-powered.

Speaking of building the Cybertruck: here are a few ideas where Tesla may build it.

Tesla is on the hunt for Cybertruck plant location in the United States. About 10 days ago Tesla CEO Elon Musk announced Tesla Inc. is looking for locations to build its in-development Cybertruck in the U.S., likely triggering a state-by-state competition similar to one he set off six years ago.

Tesla will use this new factory to build it's Model Y and the Cybertruck.

Elon Musk is actually repeating the same strategy he used for building the Nevada Gigafactory.

By publicizing Tesla’s plans to construct a factory for the Cybertruck, which is expected to be produced at the end of 2021, Elon is repeating a strategy used in 2014 to score a $1.3 billion incentive package from Nevada. According to Bloomberg, "the state lured the company’s massive battery factory thereafter Musk held a bake-off in which Arizona, California, New Mexico, and Texas were the finalists that came up short."

Musk unveiled the Cybertruck in November of 2019 just days before he announced choosing Berlin for first European Gigafactory known as Giga Berlin.

Martin Winlow wrote on April 19, 2020 - 5:22am Permalink
It looks just like a Cybertruck... and is just as utterly hideous to look at. How has Tesla gone from the gorgeous-looking Model S (easily the best-looking car to ever come out of the US) to this monstrosity?