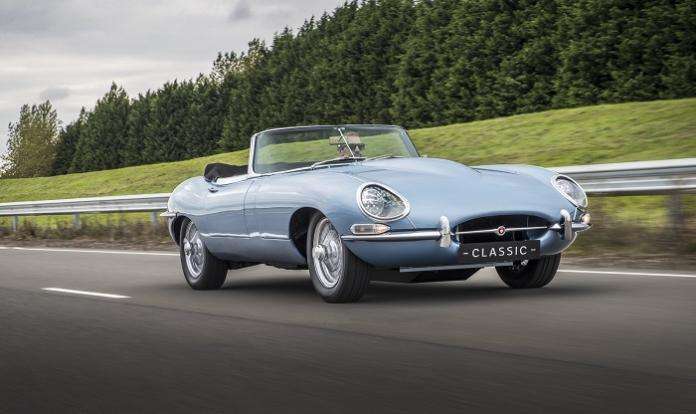 Jaguar E-type Zero Is Beautiful, But Falls Behind Depending On Your View

Jaguar E-Type is now going electric and will be called E-Type Zero, but when you compare it with Tesla Model 3 and the 2018 Nissan Leaf one wonders if it does enough to remain competitive. Her is why.
Advertisement

Sadly E-Type Zero is a concept car only, but what an amazing modern build based on a car that has been a favorite car for many people in the past several decades.

First Let's look at the known specs of the Jaguar E-Type Zero.

It looks like the past E-Type. It looks very classic. Jaguar says the performance is outstanding. The E-Type Zero is quicker than an original E-type; 0-100km/h (62mph) acceleration takes only 5.5sec, about one second quicker than the original Series 1 E-type.

The Powertrain of of E-Type Zero

"An electric powertrain developing 220kW has been specially designed for the E-type Zero. Its lithium-ion battery pack has the same dimensions, and similar weight, to the original XK six-cylinder engine used in the E-type. The experts responsible for developing the electric powertrain have ensured it will be placed in precisely the same location as the XK engine. The electric motor (and reduction gear) lies just behind the battery pack, in the same location as the gearbox on the E-type, while a new propshaft sends power to a carry-over differential and final drive. Total weight is about 100lbs (46kg) lower than the original E-type," reads the press release from Jaguar.

Here is where I have my reservations about this beautiful car. Jaguar says the E-Type Concept Zero has a range of 170 miles per charge. The company calls it a "real world" range in the press release. The company is using 40kWh battery to achieve this range and it's achieved because of the car's low weight and good aerodynamics.

The charging takes six to seven hours depending on your power source. Jaguar says you can charge it at home overnight.

This all-electric Jaguar E-Type Zero is a stunning retrofit of a classic body style. It is gorgeous. Jaguar is committed to retro-fitting to all electric or hybrid in all of its models by 2020. However, This car is going to be available only in 2019. Is 170 miles per charge a lot in 2019? I don't think so. Tesla Model 3 has set a new standard with 200 miles per charge for today and it's a quick charge. Two days ago when Nissan introduced its 2018 Leaf many people were disappointing by its 150 miles electric range. Apparently there is a rumor that by 2019 Nissan will upgrade the Leaf with a more powerful battery and a longer range. Will the 170 miles of range per charge make the cut? I don't know. It depends on your driving habits and style.

I asked around on Facebook groups about E-Type Zero's range and here is the response I received.

It does seem quite low. But Tesla are number 1 for electric cars and Nissan would be a close 2nd. But I suppose it all depends on your requirements? @170 miles per charge would mean I could drive to work and back for 1 week without needing to charge. Also the amount of fast charge points around the country is growing quite quickly and with future plans its only going to get better. I just hope the batteries are more robust than BMW i8.

What do you think? Here is E-Type Zero's video presentation by Jaguar.