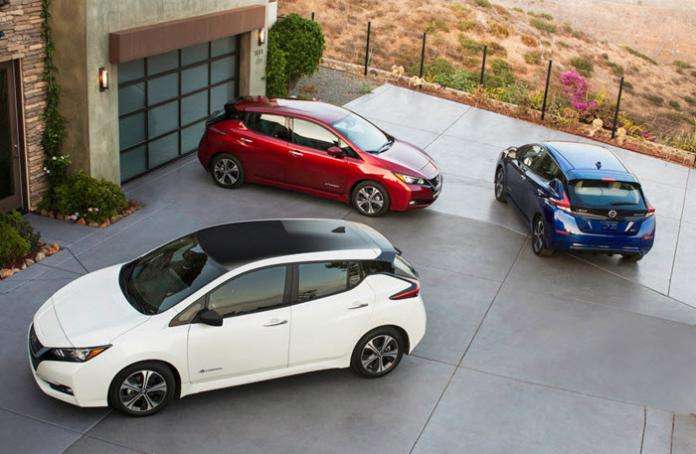 Does the 2018 Nissan Leaf do enough to remain competitive?

The time is finally here and the 2018 Nissan Leaf has finally been revealed to all of us with its specs and the rumors and gossip is now in the past. Now the question that remains is: Has Nissan done enough to remain competitive in the growing EV hatchback market?
Advertisement

Here are some of the basics and specs of the 2018 Nissan Leaf.

The compact five-door's 40-kilowatt-hour battery is projected to get a 150-mile combined U.S. range rating, Nissan says, and the starting price is $30,875 including delivery. In Japan, the new Leaf will go on sale on October 2nd. However, here in the US, we won’t see it until “early” 2018. In 2019, Nissan Leaf range will gain a second battery option, a larger 60-kwh pack, according to Nissan executives during a technical briefing held in Japan in June.

That should give the second model a range of 200 miles or more, and it will also offer higher power, Nissan said, at a higher price. The company provided no further details. The 2018 Leaf has upped it’s power a power in the base model as well. It's rated at a maximum output of 110 kilowatts (147 horsepower) and 236 pound-feet of torque. Comparable figures for the 2017 Leaf are 80 kw (107 hp), and 187 lb-ft. The onboard charger remains at 6.6 kw, with CHAdeMO DC fast charging available. Nissan says the 40-kwh battery takes 16 hours for a full recharge using conventional 120-volt household current, and 8 hours using a 240-volt Level 2 charging station. Fast charging to 80 percent takes about 40 minutes.

Arguably, the biggest change is the styling of the car. No longer is it obviously an electric car. Nissan has clearly modified the styling to match the rest of it’s lineup. Inside the 2018 Leaf electric car, Nissan has provided a new interior design that's both more conventional and more pleasant, aiming for what it calls a "relaxed ambience and premium ... feel." The interior has also been redesigned which includes a 7.0 inch touch screen with Android Auto & Apple CarPlay standard. 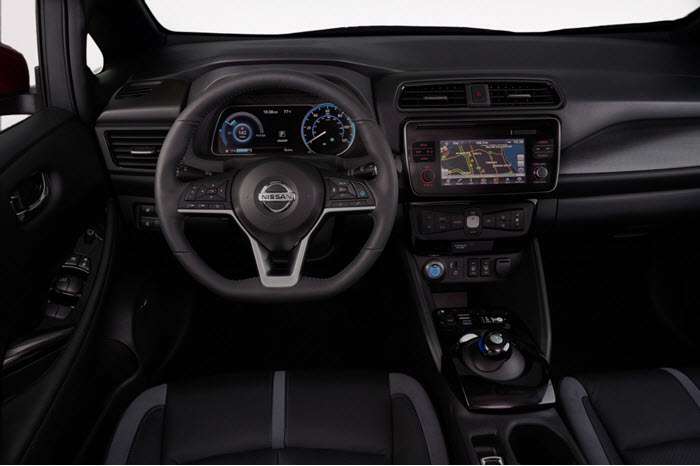 The 2018 Nissan Leaf also comes standard with what Nissan calls "e-Pedal," which allows the driver to select a mode that increases regenerative braking and permits what experienced EV drivers call "one-pedal driving." The 2017 Chevy Bolt has a very similar feature as well as a regen paddle behind the steering wheel which allows you to adjust the level of regenerative braking. The 2018 Leaf also gets to be the first car in Nissan’s lineup to get their ProPilot Assist feature. It combines adaptive cruise control with lane centering for single–lane highway driving. Drivers have to keep their hands on the steering wheel, but it reduces the need to make slight corrections when lane markings are suitable visible on the road surface.

One notable exemption from the feature list is telescoping steering wheel. That fact also leads you to the fact that the 2018 Leaf is not a complete redesign, but uses the same underpinnings as the 2017 model. The final clue lies in the fact that the 40-kwh battery pack is identical in form factor—fundamentally interchangeable, it sounded like—to the 30-kwh pack of the 2017 Leaf, retaining that car's passive air cooling.

Its cells come from AESC, too, the joint venture between Nissan and NEC that the automaker has agreed to sell to a Chinese private-equity firm.

And that's where things get interesting, because the development engineers said in July that next year's longer-range Leaf would come from a 60-kwh pack. With a more conventional exterior and a softer interior feel plus a gigher battery range, the 2018 Leaf is carving out a new niche in the EV market. The 40-kwh rating doesn't get it above 200 miles, obviously; that will have to wait a year for the higher-end 2019 model.

But 150 miles is higher than any other electric car that isn't a Tesla or a Bolt EV, including the 2017 champs (below 200 miles): the 125-mile Volkswagen e-Golf and the 124-mile Hyundai Ioniq Electric.

How electric-car buyers react to a car with less than 200 miles of range, at a price almost $7,000 lower than the 238-mile Bolt EV, promises to be a fascinating market test that will be eagerly watched. What do you think? Will the 2018 Leaf be able to find a market in the increasing competitive EV marketplace?

John Goreham wrote on September 6, 2017 - 2:03pm Permalink
Bringing a BEV to market in late 2017 with less than 200 miles range is bringing a knife to a gunfight. Best of luck Nissan. Chevy dealers in Mass are offering Bolt $6,000 discounts on top of the $2,500 state rebate and $7500 federal tax deduction. They can be viewed on the DriveGreen website. Will Nissan match those discounts?
Anon wrote on September 7, 2017 - 3:44pm Permalink
Ha, Americans think the Sun and solar system revolves around them. First of all this car wasn't made specifically for you. It will sell like gangbusters in the Asian and European markets, 150 mile range is plenty for them. Plus in those markets there are no guns to speak of lolz. Dealerships are individual franchises, they will give discounts if they need to move the product. Bolt EV had to have big discounts because it wasn't selling. People would rather buy a used tesla than a new bolt EV. First thing to understand is that it is only going on sale in 2017 in Asian markets. It will only come to the USA in "early 2018" I would guess by Feb/March dealers in some states will have them on the lots. The 2019 Leaf will be upgraded to a 60kw battery option. I'm going to guess that when the leaf comes to the US market in 2018, the 40kw battery will only be available to limited states for a short few months as a compliance car. In Q3 2018 they will release the 2019 version with the bigger battery hopefully not raising the price too much. This is what will be sold to the masses in 50 states and will compete with Bolt EV. Remember that Leaf also have autopilot features similar to Tesla autopilot v1 for cheap. Not too shabby for 30k. Unless Bolt can get autopilot features soon, it will fall behind the competition very shortly.
WadeTyhon wrote on September 6, 2017 - 5:32pm Permalink
For households looking to buy their first EV (aka most of the world) this will probably be a great 2nd car! Our Spark EV at only 82 mi EPA was a great 2nd car and complimented our Volt very well. Now the Bolt is the primary car for us and the Volt is the secondary one. I think the expected low lease rates on the Leaf will make a great first EV for dipping your toes into. But since Nissan still has no proper TMS, if you live in a hot humid environment I would suggest leasing a Leaf or buying a Bolt, Volt or Model 3. GM and Tesla have much better battery reliability. Leaf batteries degrade faster since they are passively cooled. And tend to get very hot when using DCFC. That will slow down your charging rate while traveling.