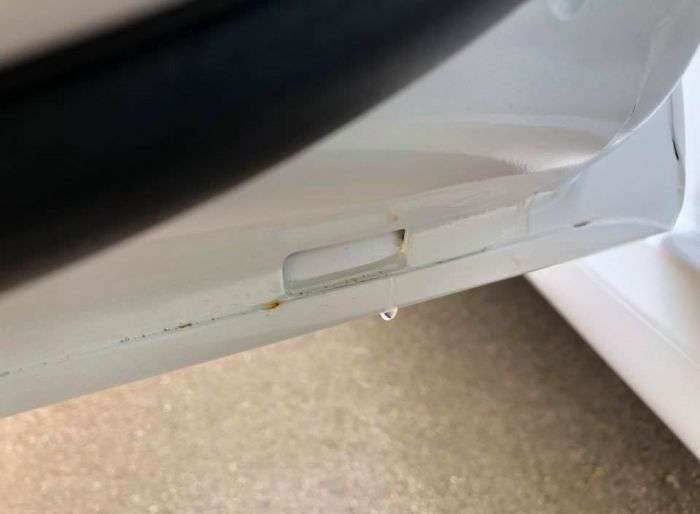 This afternoon Torque News received a tip from one of our readers sending this image from Imgur and pointing us to this Reddit discussion, which allegedly shows a white Tesla Model 3 door and rust on it.

A user Ninja28, who says he is a Model 3 owner posted this image and made this comment.

When I opened the passenger rear door on mine to retrieve something after driving through the rain for maybe 20 minutes a whole bunch of water spilled out onto my garage floor, might have something to do with the rust? I haven't noticed any rust on mine though.

While it's hard to confirm if this is a Model 3 door, no one seem to contend that in the discussion.

In fact, another user, named Malventano in the same discussion wrote something similar too.

"This is my 3. Yes the door is aluminum. Took a strong magnet to the bottom of the door just in case there was steel in the edges - not ferrous. It definitely looks like rust and won’t rub off with a microfiber. Can only imagine it is a stain from rust runoff from something within the door. Will bring this up along with the next round of issues at the next service visit," commented Malventano.

Then people share images of their own Model 3s. Some raise the question of how will these vehicles age in northern climates where salt is used heavily in the winter? This is a serious unknown.

Here is a good video discussing if Tesla Model 3 will face Corrosion.

What can we do?

Let's wait a while. Model 3 is a first year model car. See how Tesla responds and see how the car ages as the miles accumulate in the northern climates. Unlike the aluminum Model S and Model X, this is a steel car, so it's going to be vulnerable to rust.

On the other hand, living near the ocean may make you vulnerable to rust as well even without winter due to salt spray (Sea salt aerosol (SSA)) from the ocean. I hope this is not related to the issue of flawed-parts issue that slowed down Tesla Model 3 deliveries in the past several months.

Let us hear from you in the comments section below please.

kent beuchert wrote on March 28, 2018 - 9:39am Permalink
After seeing the photos of that Tesla Model X fiery crash in California, I don't give a damn about Tesla rust - I'm never going to ride in one of those obvious potential death traps, much less fork over the exorbitant price to buy one. Question is, when will they be recalled, either for their distracting and idiotic touchscreen control panel, or their tendency to incinerate their occupants
Bareyto wrote on July 28, 2018 - 2:38am Permalink
I have the same issue. My Model 3 is strangely accumulating water on the passenger rear door when I open it after it rains or when I wash the car. Is this normal? Will Tesla fix this if I take it in for service?
Joshua Burstyn wrote on June 5, 2019 - 12:26pm Permalink
OK, feel free to discount how many conventional cars "incinerate their occupants". Don't forget that ICE fires can happen rather spontaneously whereas Tesla fires normally give occupants minutes to leave the car after the car's console has indicated a fire is imminent due to thermal runaway. Then there's the crash rating on the Model X, but hey, you're the expert in crash safety.

LG's New EV Battery Plant Is a Welcome News for Tesla
Tesla Giga Berlin's New Hurdle: It's Not Only the Gov't, but Now Tesla Itself
END_OF_DOCUMENT_TOKEN_TO_BE_REPLACED