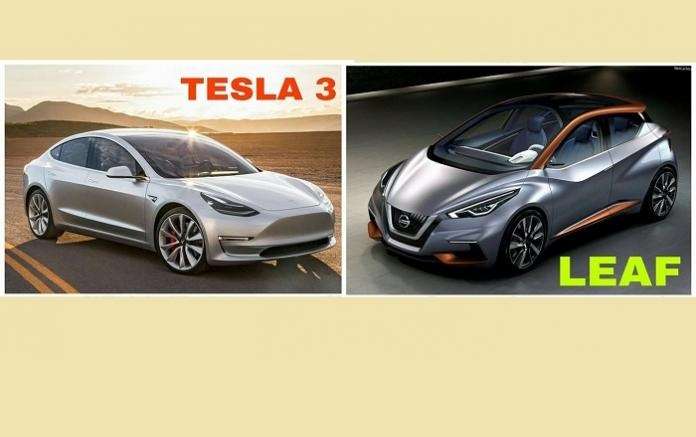 Few days ago Tesla started its official sales of the iconic Model 3 and in two months Nissan will unveil its 2018 Leaf which is comparable to Model 3 in many ways including the price and range. But here are few points when it comes to comparing Model 3 vs Nissan Leaf that are very necessary to take into consideration when making the comparison.
Advertisement

These three things much be taken into consideration when comparing the 2018 Nissan Leaf vs Tesla Model 3. The points in this commentary are provided by a Facebook user named Gary from the Nissan Leaf Owners group. He makes interesting observations.

First, don't compare the Tesla Model 3 to the Nissan LEAF. "Sure the Tesla 3 has a teaser $35K price that everyone is fixated on, but it is for a content reduced car, that is equipped like a Taxi," writes Gary. While Tesla has started Model 3's official sales, the first 50 unites have gone to the employees and the EPA numbers aren't known yet.

If you insist on comparing it, then you have to compare it to the $45K car which has an equivalent content level.

Second, take into consideration of the 2018 LEAF pricing. Nissan has been very consistent with its pricing with the LEAF for the last 6 years. Three levels of trim, starting at less than $29K, then a mid range at about $32K, and the Highline trim at $36K. There is no reason to think that they will not carry over these three pricing tiers for the 2018 LEAF. This means that a 160-mile car will probably start at around $25-$27K.

Third, consider the range of the 2018 Nissan Leaf vs the Model 3. Nissan knows its market better than anyone else, and its engineers know that 90% of their market will be just fine with 160 miles of range for what it is primarily used for as a commuter car. But for the other 10%, they will most probably add a 240-mile or greater option when the cost curve for a larger battery makes that option feasible at a minimum upcharge later in 2018, writes Gary. Take a look at this story comparing which is prettier 2018 Nissan Leaf or the Model 3.

Another user in the group named Johannes has the other view and approach when it comes to comparing the 2018 Nissan Leaf vs Tesla Model 3. Here is what Johannes writes.

"First this isn't a fact driven comparison, its a speculation of what we know so far," writes Johannes referring to Gary's comparison. "Second, Nissan Leaf and Model 3 will be compared more than you would like to hear (it sounds like) specially when considering the standard mod 3, and why not, they are both meant for mass market with the latter being in its price range please fact check how much a standard 220mi model 3 is starting at. I will tell this much: there are current SL trim LEAFs that go for 39K. So I don't know where you got this 36K highest price from? I own a LEAF and the only thing I don't love about it is its range. Calling the model 3 content reduced? Why, because of the simplicity of the its dash? Beauty is subjective, besides to any real EV driver, range is king! And that is my whole argument here, so I say again I am thrilled that the LEAF will look "better" than the current model, and be accepted by every one else. Cry me a river, but at the end of the day, looks on the car will not get me home. Range will."

Well, we have to wait and see. The truth will be revealed in a month. But I agree with Gary that it is a stretch to compare a $25K LEAF with a $44K Model 3.