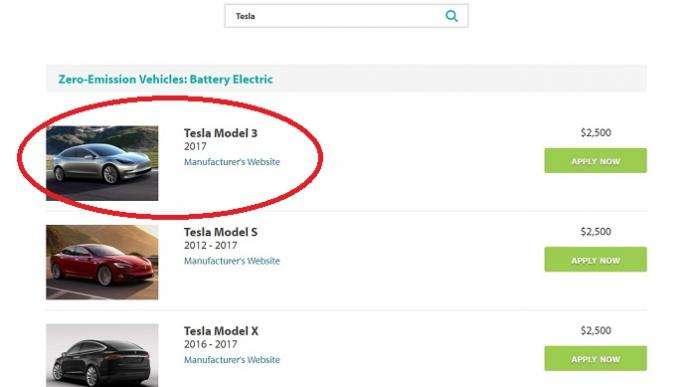 How To Buy Tesla Model 3 for Only $25,000 in California: Cost Comparison

California's CVRP project just added Tesla Model 3 to its list of eligible vehicles that can receive additional rebates virtually lowering the cost of owning the Model 3 to 25,000 dollars, but only certain categories of people can apply.
Advertisement

Tesla Model 3 at the moment is the cheapest car that Elon Musk's company produces. Its official price tag starts at $35,000, which is way lower compared to Tesla Model S. However, residents of California will now be able to purchase it for $10,000 cheaper, paying only 25,000 dollars.

As you already probably guessed, it's the state benefits to promote environmentally friendly cars that make this price drop possible. Tesla model 3 is now officially included in the Clean Vehicle Rebate Project (CVRP), which significantly reduces the cost of an electric vehicle through a federal tax credit. Depending on the conditions and criteria of specific buyers, the discount can be even greater, but on average for an interested resident of California, the cost of Tesla Model 3 will drop to $25,000.

Not Every Model 3 Owner Will Qualify

However, not every Tesla Model 3 owner will be eligible for this additional 2,500 dollar discount. The issue here for the potential buyers is that individuals, whose income is above $150,000 a year or families with a combined income of 300,000 dollars per year are not eligible for the CVRP rebate program. But this is not biggie. Americans with an average salary of more than $ 12,500 a month will certainly be able to pay the full cost of an electric vehicle without any problems.

Rebates After The Purchase

Also you should know that the owner of a Tesla Model 3 vehicle will receive the benefits only after the purchase. This means, you will need to pay the full price and then only apply for the rebates and receive the federal electric drive credit, with 7.500 dollars and the 2,500 thousand rebate if you are a California resident through the CVRP program.

The Clean Vehicle Rebate Project (CVRP) - which promotes clean vehicle adoption in California by offering rebates of up to $7,000 for the purchase or lease of new, eligible zero-emission vehicles, including electric, plug-in hybrid electric and fuel cell vehicles - has several additional conditions and nuances. Thus, if you are interested in this rebate opportunity, I would recommend studying it more in detail on its official website.

MSRP Price Comparison of Most Popular Electric Cars Before Incentives

Scott Hedrick wrote on July 28, 2017 - 6:19pm Permalink
In other words, it still costs the same, but people not buying the car are having their money seized to pay part of it.
Armen Hareyan wrote on July 28, 2017 - 8:58pm Permalink
What do you mean Scott? Would you like to clarify or elaborate a little more?
Scott Hedrick wrote on July 28, 2017 - 10:40pm Permalink
That's easy. The subsidy comes from tax money. Tax money is extracted by force or threat of force. Using a subsidy to buy one of these means being happy that other people are paying part of the buyer's car. If you think taxation does not involve force, ask Wesley Snipes. The real cost is the cost without subsidies.
Armen Hareyan wrote on July 28, 2017 - 10:43pm Permalink
When I was taking a course on Macro Economics, I remember our professor telling us that taxation is voluntary. The public decides to give taxes voluntary. It's interesting that this particular Model 3 rebate is only in California.
Scott Hedrick wrote on July 29, 2017 - 8:53pm Permalink
"The public decides to give taxes voluntary. " So, did that professor test that claim? As Wesley Snipes what happens when you don't "volunteer" to pay taxes.
Steven Morgan wrote on July 29, 2017 - 1:10pm Permalink
Actually, you will not get the federal credit of $7500 foir the model 3 because that credit ends when 200k model 3's are sold. Since 500k people already have orders placed, many of those will not the credit either. You must acquire the car in the same year the 200k # is reached in order to get even a partial credit as it is phased out over that year.
Scott Hedrick wrote on July 29, 2017 - 8:56pm Permalink
Which does not, in any way, change the fact that the actual price is without the subsidy. That's the amount actually being paid. Part of it, the subsidized part, is being paid by people who will never get to drive or even see the vehicle they are being forced to pay for. An honest discussion of the cost or price of anything will not include any subsidy.
michael manera wrote on June 6, 2020 - 9:13pm Permalink
where can i buy a new 2020 tesla model 3 for less than 30000 dollars after rebates are there still federal rebates and california rebates?