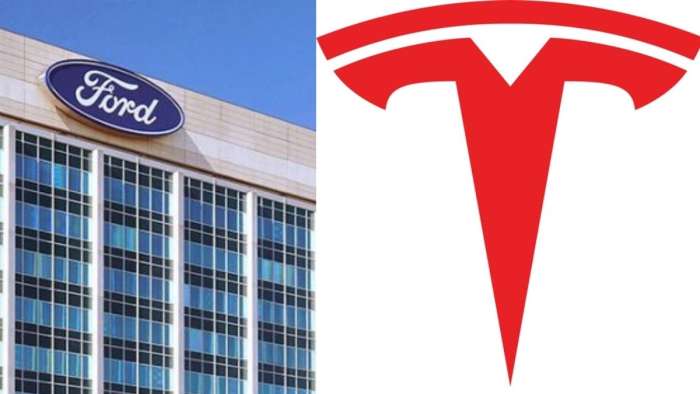 Tesla's stock has been rising in the past year, but despite Gigafactory expansions it hasn't introduced a new vehicle in years. Yet Ford is strengthening its lineup with electric Mustang Mach-E, Bronco and the 2021 F-150. Sanjeev Kumar from Car Indigo explains and opinions are his.
Advertisement

If we look in the past, the 2003 established Tesla and its hippie CEO Elon Musk have been through ups and downs. The charming entrepreneur has also bagged the title of world’s Richest person, dethroning Jeff Bezos of Amazon. Even the stock market is in love with Tesla Inc., while just one-liner tweets of CEO Musk seem to manipulate the market drastically. With all this, is Tesla a safe investment? Ford’s announced 2021 Ford F-150, Mustang Mach-E, and Bronco nameplates are stealing the spotlights of the automotive industry for sure. Does this tag the American automaker, a righteous competitor to Tesla, and does Ford have in it, to be the best auto stock in coming years?

Hundreds of questions and answers, and come along various parameters which can be critically lined to an inevitable hunch.

With the shift to electrification, Tesla has had an edge for being crazy-focused. Some could point to things like the solar panel business, or energy storage, but 89.4% of third-quarter revenues stemmed from car sales. But when other brands are concerned, these automakers are diversified. Brands like Ford have a versatile lineup, consisting of capable commercial vehicles like Transit, and the muscular 2021 Ford F-150, which revived nameplates like Bronco and electrified prodigy like Mustang Mach-E. But like Tesla, every automaker is now focusing on electric vehicles. Brands like Porsche, Ford, and even GM have been successful ventures with gigs like electrifying the 2021 Ford F-150, Hummer EV, and the Porsche Taycan. And the market and the auto stocks definitely correspond to sales.

In 2019, Ford sold over 5.4 million vehicles, which was after the decline from the prior year’s total of 5,982,000. While General Motor cashed 7.72 million vehicles in 2019. Tesla, despite leading the electrification campaign, produces 365,232 vehicles in 2019 and delivered a total of 367,656. The company is ramping up production to a target annual capacity of 500,000.
Uncertainly, these ways do contribute to the future of Tesla Inc., Ford Motors, and other automakers stocks.

While Tesla has rocked the stock markets, brands like Ford and GM have been through a downfall. But what’s the catch?

The Mars-dreamer CEO Musk has been the most happening thing in the automotive industry. Part of which is credited to Tesla’s biggest achievements in electric and autonomous vehicles. These two were the main ingredients to the magic potion of Tesla’s rise. But eventually, every brand is moving over to EV and AV acronyms with a cheetah’s pace.

Last year Ford invested approximately $7 billion in electrification in route to ramping its investment to roughly $22 billion by 2025. Even with the big head start gap to Tesla, Nio, and others that are contributing to electric car space, other brands have diverse and versatile nature to catch these leaders. Especially Ford, whose biggest chance of success lies in the van and truck market. The American automotive manufacturer was first to announce the all-electric van called E-Transit, and an all-electric version of a capable workhorse, the 2021 Ford F-150 pickup. Ford is also sharping its weapons, getting into the autonomous vehicle war. With all these, does Ford have the potential to be the better auto stock than Tesla?

Could be. With Ford slightly sluggish to the EV and AV transition, they are better late than never, especially after electric and autonomous vehicles’ market forecasting to reach $800 billion and $700 billion, respectively, by 2027.

There’s still a long way to the finish line and Ford has chances to catch up and capture a substantial slice of the combined $1.5 trillion global markets. With Ford’s investment in these crucial markets, there are still chances to dethrone Tesla and own the royal chair as the best auto stock in the market.

John H wrote on September 5, 2021 - 2:45am Permalink
Seriously? Tesla "hasn't produced a new vehicle in years." - Ever heard of the Tesla Model 6 Plaid, you know the one with the highest safety rating of any car ever tested and runs the 1/4 mile in 9.1 seconds.(Fasted mass produced car ever) Or perhaps the Cybertruck rings a bell or the best selling electric car in the world, Tesla Model 3. Here's why Ford may not be a better long term stock investment in coming years, they may not be around in coming years. Ford broke even last year whereas Tesla had record profits of $11.96 Billion, a 100% increase over the year you elected to cite in your article. Here's another reason you may have opted to use 2019 statistics as Ford's vehicle wholesales fell from almost 5.4 million units in 2019 to around 4.2 million units in 2020. Tesla's Long-term debt: $9.56 billion - Current debt: $2.13 billion - Total debt: $11.69 billion. Contrast that with Ford's Long-term debt: $103.20 billion - Current debt: $49.47 billion - Total debt: $152.67 billion. Tesla’s market cap was $631.26 billion, making it the 9th most valuable company by market cap. That number also fluctuates due to Tesla’s performance in the market. In 2020, Tesla’s market cap jumped up 783.42%, compared to its 31.82% jump in 2019. Vs. Ford’s market cap was at $55.64 billion, making it the 344th most valuable company by market cap. Ford’s 2020 gross revenues totaled just over $127 billion, which represented a decline of 22% year on year. If you're going to provide investment advice I think you owe it to your readers to give them honest complete picture advice.