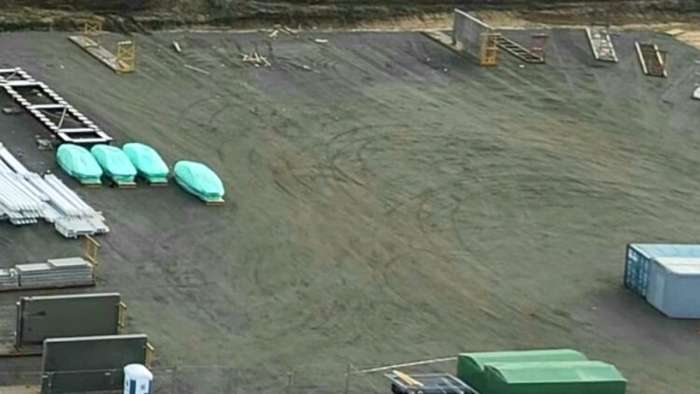 Sample for Giga Berlin: Tesla is said to have produced 17 Model Y vehicles with new 480 battery cells in the USA, which the company recently unveiled at its Battery Day.
Advertisement

Last week, we saw several mysterious Tesla vehicles wrapped at Giga Berlin, which looks suspiciously like the Model Y, which will soon be produced there. They could be used for testing the paint shop. At the same time, Tesla seems to be preparing the production of the electric car in the new factory in the USA.

At the Fremont plant, 17 Model Ys have just been produced for this purpose, an observer reported on Monday. They should already be built according to the new design and with the new 480 Tesla battery cells, which Tesla CEO Elon Musk has announced as a major technical challenge for the German Gigafactory.

We found out about the production of the 17 samples of the Model Y from a "trustworthy source", wrote on Twitter @bburnworth, who deals a lot with Tesla, but does not seem to be an insider. But his information is quite detailed.

He says these Tesla vehicles are the test samples with the 4680 cells. At least from the German Tesla Model Y, this also means that the front and rear frame parts are each cast in one piece in huge Giga Presses and a part with the 4680 batteries is placed between plates in the middle, as CEO Musk explained. According to the Twitter observer, this is exactly how the 17 Model Ys that are now being produced on a test basis are constructed.

From a reputable source: Fremont made 17 Model Ys with 4680 Tech today getting ready for Berlin production.

Is this information plausible? Possibly yes, thinks Teslamag, because a few weeks ago two of the huge Giga Presses that Tesla needed for the front and rear of the Model Y were installed in Fremont. The Giga Berlin will get 8 Giga Presses, thus contributing to making the Model Y made in Germany less costly. In fact, Giga Berlin's first project manager Evan Horetsky confirmed to Teslamag before his dismissal that the front and rear frames should be cast with them.

According to Musk, Tesla has also been producing 4680 cells on a test facility next to the Fremont plant for months. The volume is said to be very small so far, but it should be enough for some samples for Germany without any problems.

If the information from the Twitter observer is correct, Musk should mean business with his announcement that the German Model Y will be produced from the start with a cast rear and front frame and the 4680 battery sandwiched in between. This represents a "significant production risk," Musk said in early October. On the other hand, it was reported at the beginning of December that cells for the Tesla electric car from Germany would initially be supplied by LG Chem. Therefore, Tesla's own production shouldn't be ready anytime soon.

The Tesla Model Y is due to be launched in Europe early next year. The Giga Berlin Model Ys will start shipping from Grunheide starting the second quarter of 2021. I wanted to see how popular are Teslas in Europe and talked to Orangewheels Leasing from UK.

David Trattles, the Director of Sales at Orangewheels Leasing, said he look at their electric vehicle enquiry numbers for Torque News and shared with us some statistics. "With the recent announcement from the UK government banning the sale of Petrol and Diesel vehicles from 2030, we have seen a strong rise in inquiries on electric vehicles of 47% compared to 2019, and we expect it to rise still further in 2021 with the launch of the Tesla model Y," Trattles wrote to Torque News.

Thus, I think with this and similar statistics coming from Europe, Tesla shouldn't have any problems, especially in the first couple of years to make and delivery Model Y vehicles off the assembly lines of Giga Berlin.