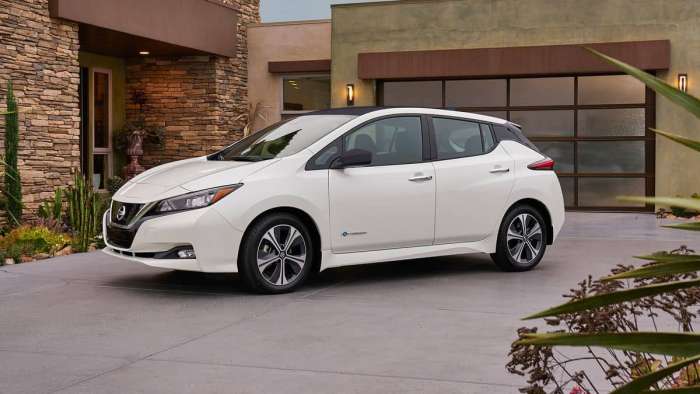 The Date of 60kWh Nissan Leaf's Debut Is Known, but Without Liquid-Cooling

Some German automotive reporters have gathered information about the date when the new 60kWh Nissan Leaf will debut and we already know why the 2019 Leaf didn't debut at the LA Auto Show. However, there seems to be a little disappointment that it will be without liquid-cooling. Many EV drivers were waiting for this feature that the Bolt has.
Advertisement

According to Electrive, its colleagues in Germany gathered this information in dealer circles at a Nissan event few days ago. At that event, according tot his report, "the Japanese carmaker informed its partners that the Leaf will debut at the CES in Las Vegas on January, 8."

Many EV enthusiasts and Nissan Leaf owners were hoping that finally Nissan will introduce a Leaf in which its battery is cooled by a liquid cooling system. However, this is not the case with this new Leaf, which is going to be revealed in January at CES in Las Vegas. The battery of the 2019 Nissan Leaf is indeed going to be bigger (60kWh) and will have an increased DC charging capacity, but the cooling is not going to be liquid.

"When this information was conveyed at an event for Nissan dealers yesterday, a whisper could be heard across the rows as it became clear that the 60 kWh battery will have to go along without liquid cooling," reports Elective in the above-mentioned reference.

The lack of liquid cooling battery has already led to an angry discussion in social media such as Reddit.

"Good grief. Kia e-Niro it is then," writes one Nissan Leaf enthusiast.

Others are asking why is Nissan still dragging its feet on this? Every other EV has liquid cooling, and none of them have the 40kwh Leaf's fast-charging problems. "I love my Leaf, but Nissan needs to get with it and catch up with the rest of the industry on battery cooling. I don't see a good reason to choose a non-liquid-cooled 60kwh Leaf over a liquid-cooled 60kwh Kona, Niro or Soul with the same range for the same price. The more I learn about the Kona especially, the more I love it. Nissan is gonna have to do more than this to compete with it," writes another Leaf owner.

Nissan has postponed the debut of a new modification of its electric car Leaf because of the arrest of the head of the Renault-Nissan-Mitsubishi alliance Carlos Ghosn, reports The Wall Street Journal.

According to the publication, at the last auto show in Los Angeles, the Japanese automaker planned to show the Nissan Leaf hatchback with an increased power reserve. The plans were changed due to the scandal around the top manager, so Nissan presented only slightly updated models of Murano and Maxima. Representatives of Nissan confirmed to The Wall Street Journal that the premiere of the electric vehicle was postponed to a later date, but no information was provided about the date of the premiere of the novelty.

Mr. Gon was arrested and dismissed from several posts after conducting an internal investigation, which revealed that the top manager had abused his position by appropriating the company's funds and hiding his true tax revenues.