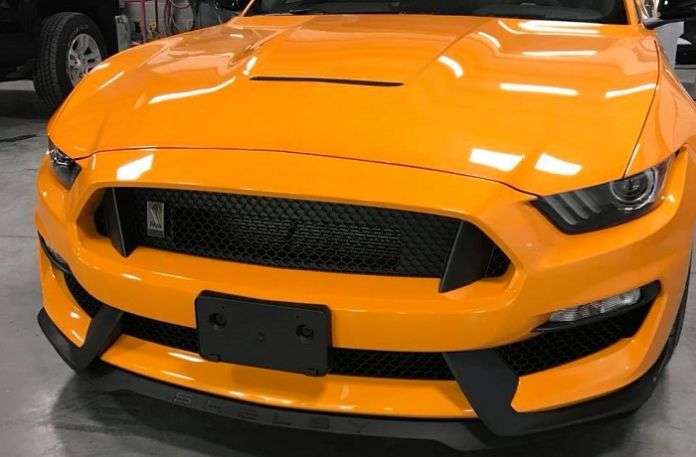 A man in Ohio went to pick up his brand new Ford Mustang GT350 and saw a license plate bracket drilled and fastened to the front of the vehicle.
Advertisement

What would you do if you showed up to the dealership to pick up your GT350 (building and price of GT350 Mustang) and saw this? Two days a go a man from Ohio posted this picture of his brand new Ford Mustang GT350 saying he went to a dealership to complete the purchase and pick up his car and saw the license plate bracket drilled and fastened to the front of the vehicle.

Apparently they never asked permission they just did it. I know that some dealers ask for permission, but apparently some don't.

He posted his question in S550 Mustang Group on Facebook getting some interesting feedback from the group members. Now to be fair to the dealership we must say that if the car is in the their lot with the license plate bracket drilled to it you get what you get. But if you order it without it and then by the time you pick it up it's newly drilled to it, then that's a different issue.

Those two bumps annoy some Ford Mustang owners. "I just don’t run my front plate. The bumper plugs are definitely better than 2 holes in the bumper though," writes Stephan, a group member. In some states you just need your rear license plate.

"Thirty-one states require their motorists to display license plates on the front and back of their vehicles. The “Rugged Nineteen” states that require only one plate include Alabama, Arizona, Arkansas, Delaware, Florida, Georgia, Indiana, Kansas, Kentucky, Louisiana, Michigan, Mississippi, New Mexico. North Carolina, Oklahoma, Pennsylvania, South Carolina, Tennessee, and West Virginia. Some of these states do not even require a state safety inspection, (but we’ll save that one for another article)," reports IMPROV.

Some people say fixing this on a Ford Mustang GT350 will cost about 500-600 dollars if done right. Others say you can make that thing work with a good custom refinish and planer. With a little bit of touch and class that color will not look so bad.

"At the dealer I work at we don't put front plate brackets on Corvettes, Camaros or the SS until it's bought and if they request it. People buy from out of state all the time and not all states have a mandatory front plate law," adds another group member.

What would you? Have you been in a similar situation? When you buy a car from a dealership do you ask them not to drill a front badge? Please share your opinions and experiences below to discuss in the comments section.

don wrote on November 3, 2017 - 4:18pm Permalink
Get over it, get a couple of plugs and put the correct color on them... Done
Bill wrote on November 4, 2017 - 2:55pm Permalink
Have opted not to mount front plate on either my Golf R or Macan. So far so good, but expect a warning from the Mounties at some point. All it takes is is to be stopped, even for something unrelated. Then I will have to make a decision. Maybe resort to a grill mount.
Matt wrote on November 6, 2017 - 7:43am Permalink
The cheddar cheese color of the car would be the bigger issue for me.