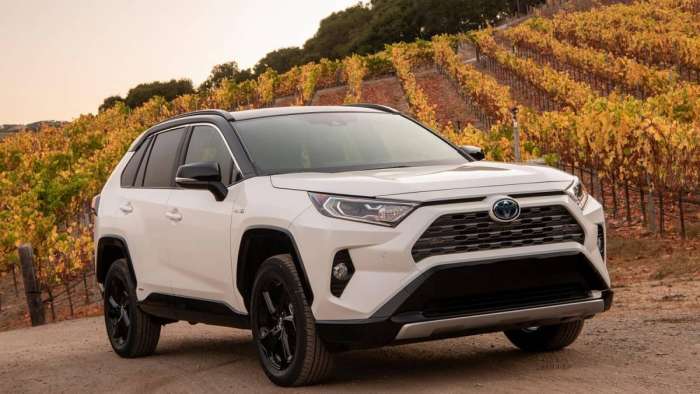 The recently teased Toyota RAV4 PHEV has caused a buzz on the internet, but let's see if it can compete.
Advertisement

It is very good news that Toyota is coming out with a plug-in version of their RAV4. The less-good news is that it is a 2021 model.

Toyota has had a couple full electric (BEV) versions of the RAV4 (1st model in 1997), so in one sense they are going back a step in releasing a PHEV version, and in 2021. And because it looks to be a year away, it means that all of the other automakers who are moving toward electrification will have time to catch up and pass Toyota in their products.

In one sense Toyota appears to be ahead of most rivals in their EV offerings.

Honda will be offering the CRV as a normal hybrid, but hasn't shown any plug-in hybrid or BEV CUVs yet. Nissan is not even in the EV CUV game, having killed off the Rogue hybrid this year, they just have the Leaf as it's sole EV offering, they are rumored to be offering a full electric crossover, but not until 2021.

Chevy has its impressive Bolt today and it's rumored larger EUV/BEV crossover is due in the RAV4 PHEV timeframe, as is Ford's planned Mach-E, which will be a powerful, long range BEV CUV with Mustang styling cues. And in that 2020-2021 timeframe VW will probably release their ID.4 CUV and ID Buzz EVs as well.

And then there is Tesla.

In the same way that the Prius Prime does and doesn't compete with the Tesla Model 3, the RAV4 PHEV will undoubtedly be compared against the upcoming Model Y. And considering that the 2012 RAV4 EV was really a test bed for the Model X, the Model Y is a logical extension of where the RAV4 EV could be. The RAV4 PHEV should be less expensive than the Tesla Model Y, but a loaded Model Y will probably come pretty close in price, especially with a lower cost Model Y (under $40K) due after it's introduction. And like the Model 3, the base Model Y will probably be quicker and offer better handling than the RAV4 PHEV, and the Performance Model Y will be in another league, offering performance car acceleration.

Still, the RAV4 PHEV will be a great success.

Toyota brings its strong engineering, good reliability, and good resale value to the competition with this upcoming model. And Toyota is showing a strong line-up of EVs (hybrids, PHEVs, and BEVs) across their whole model line-up, especially compared to their major automaker rivals. So even though they are moving cautiously (and too slow for some EV enthusiasts) in the larger picture they are still ahead of most of their rivals, and leading the industry in the move towards EVs.

John Goreham wrote on October 16, 2019 - 10:01pm Permalink
Great closing paragraph. You are one of the EV enthusiasts I can relate to. I can't understand the many EV folks who view Toyota as the "Enemy." I don't know the official inventory date for the new RAV4 PHEV (nobody does) but I am pretty certain it is a 2021 MY vehicle. Which likely means it will be in driveways in about 8 months. No mainstream automaker is anywhere close to having a volume crossover with a plug by then. Except for Mitsubishi (sort of) and as you point out, the Model Y. Can't wait to see how many Toyota decides to build. And where it will choose to sell them.
JeremyK wrote on October 17, 2019 - 9:53am Permalink
Not too late. You're forgetting that not everybody lives in CA and for the rest of us, this is new technology that has not previously been available from a major OEM. As a former Volt owner, I can say that many of us longed for a CUV form factor with AWD as an option. My two-car household has a Bolt and a Mazda CX-5. This will almost certainly replace the CX-5 within the next 12-24 months. My wife will be able to take the kids to school, go grocery shopping, and run other errands all week, driving fully electric. For family trips, we'll have the gas engine to go anywhere, any time, with great efficiency, with family in tow...plus the ability to pull a trailer if needed. Even Model Y with Tesla's charging infrastructure can't offer that level of freedom here in MI or many other regions of the country. I doubt that there will be many that will cross-shop the RAV4 PHEV with a Model Y, which will likely have an MSRP of $10k+ more than the Toyota. For value-minded customers with an eye on quality, that $10K difference will be too much. Plus, I for one, still don't trust that Tesla is properly validating their vehicles prior to launch. Toyota has a proven PHEV powertrain and renowned build quality which is a huge selling point for me.
DeanMcManis wrote on October 17, 2019 - 10:07am Permalink
Yeah, you and I share the view that the successful adoption of EVs is going to be an evolutionary path. Not only offering one single BEV model to get press headlines, but offering a whole line-up of hybrid models, PHEVs, and BEVs to meet the cost and use needs of the larger American car buying market. A couple points that are interesting about the Mitsubishi Outlander PHEV, which is available now starting at $36K before subsidies. The Outlander PHEV has a 12kWh battery, which allows for 22 EV miles, and is the only PHEV CUV that offers DC charging, allowing you to get an 80% charge in 25 minutes using it's CHAdeMO connector. So right now the Outlander looks like the only real PHEV CUV competition for the upcoming RAV4 PHEV, but in a year's time there are going to be MANY more PHEV and BEV models out to compete against the new RAV4 PHEV. Hopefully Toyota doesn't just limit sales to California, as some automakers have done with their PHEVs.
noah wrote on October 22, 2019 - 6:39pm Permalink
Little late? Are you kidding, the Rav4 is the hottest selling passenger non-truck vehicle in the USA. This will sell like hot cakes. Given the choice between a Rav4 that can go 25-30 electric miles and 500 miles on gas I will chose it 10x over a base model Y with ~200 real world range. The Rav4 will have over 8" clearance as opposed to 5.5" for the Y and will have AWD standard where you'll have to shell out low $50K minimum to get it on the Y.