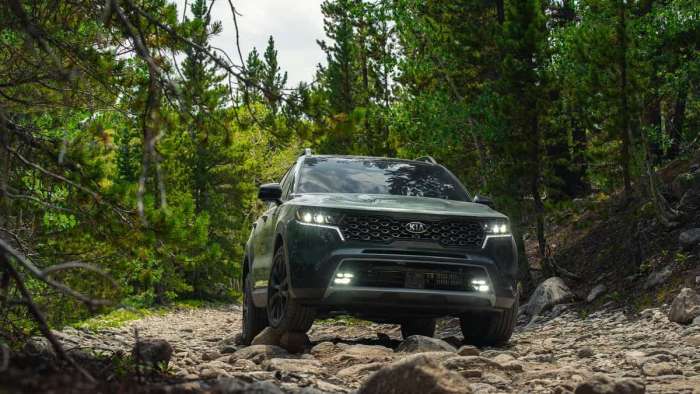 At Torque News we love the old-generation Kia Sorento (2016-2020) for all of its qualities. It has proven its reliability, offers excellent performance and enjoys a good reputation. The pressure is very strong for this fourth generation. Will she be able to seduce us?

Launched a few months ago, the new generation Kia Sorento (2021) is sportier, sharper and more modern. It was just at the end of November 2020 when the new 2021 Kia Sorento arrived at dealerships. All the changes that I described above mean that we are dealing with a greatly improved product.

At the en of December Torque News reviewed the hybrid version of the 2021 Kia Sorento and I wrote that it's one of the best hybrid SUVs I had tested in the past year. Kia has also announced that a plug-in hybrid version of the new Sorento, which is expected to see the light of day at the end of this year year.

This week we have been testing the X-Line AWD trim, which has 2.5-liter turbocharged 4-cylinder engine, 8-speed dual clutch auto transmission and 311 lb-ft of torque. The combined fuel economy of the 2021 Sorento X-Line is 24 miles per gallon with 21/28 city and highway. The hybrid Sorento, which I just mentioned above, has 39 MPG city / 35 highway / 37 combined hybrid mileage.

It is true that, like its predecessor, this new Sorento offers a third row of seats, but it remains cramped compared to larger SUVs like the Telluride. So if you are looking for a true 7-seater SUV, it would be better to bet on a Telluride rather than a Sorento, due to its significantly more passenger space. It is the Telluride which replaces the Sorento as the flagship SUV at Kia. The Sorento therefore now ranks between a Sportage and a Telluride within the range, showing itself as a more adventurous option but all the same more versatile than a Sportage.

In addition to completely redesigning the Sorento's market position, Kia has dropped the 3.3-liter V6 in favor of the turbocharged 4-cylinder described above. This decision allows the turbo Sorento to display almost identical power of 281 horsepower (instead of 290), but a significantly higher torque of 311 lb-ft (instead of 252), giving it significantly better acceleration than its predecessor.

However, the abandonment of the V6 engine also had a detrimental effect on its towing capacity. The old Sorento could tow up to 5,000 lb, while this one is limited to 3,500 lb. In other words, if the goal is to transport the family and tow a trailer or a boat, the Telluride again makes more sense. 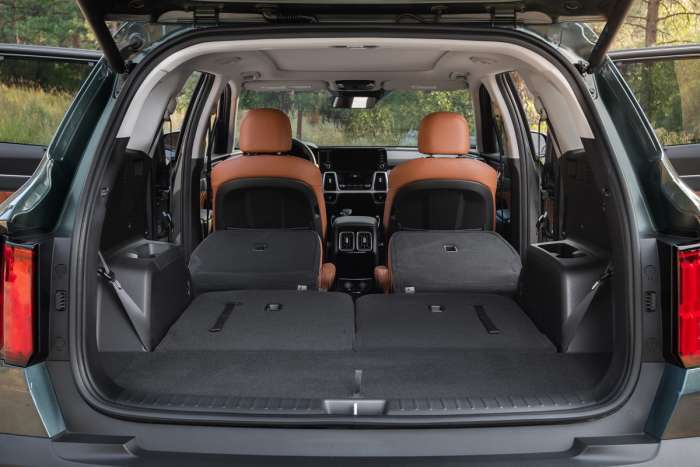 The 2021 Sorento, however, remains very interesting for a couple or a family with three young children, and who do not necessarily want to tow a large load. In addition, once you fold the backrests of all seats to the floor, the Sorento can accommodate up to 2,139 liters of cargo, which outperforms the old model by a few liters (2,067). 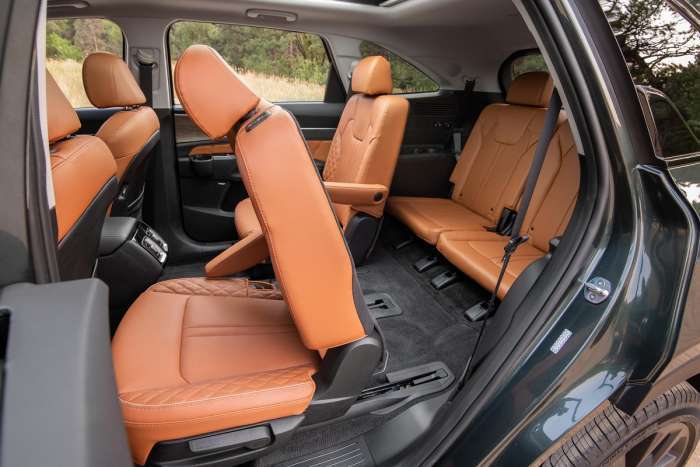 It is for the first time that the Sorento arrives with a 6-seater configuration from the X-Line level. The second row captain's seats mounted on slides allow clearance to increase by 93 mm compared to the previous generation. You go to the third row bench by a push button on the backrest. The opening offers easy access, however comfort is limited with the knees in the forehead.

Several points are interesting starting with the standard LED headlights. Starting with the EX ($ 42,960), we arrive with more powerful headlights and fog lights at the bottom of the body. Still at this level and higher, the entire bumper differs with a glossy black applique. For the rims, we go from 17 to 20 inches. At 20 inches, this is a first for the Sorento. Regardless of the model, there is no chrome on the body. 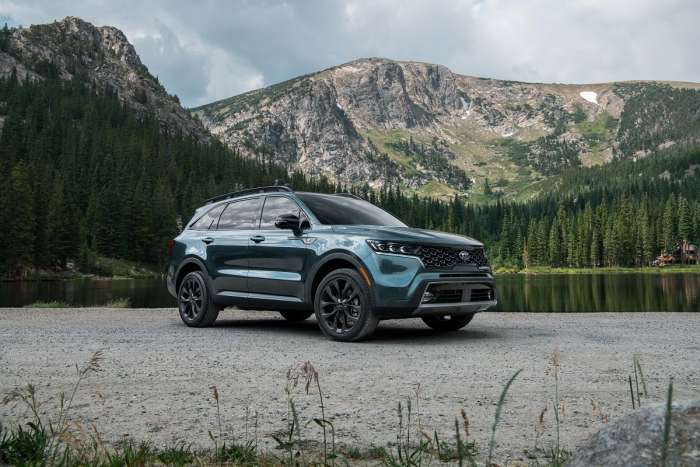 The X-Line trim comes with a slightly more adventurous appearance considering that its suspensions are slightly higher (18 mm) than that of the "regular" models. 20-inch charcoal gray rims and slightly raised deck-style roof rails are also offered. The exterior finish and paint quality, Aruba Green, on my test vehicle looked really nice.

For the driver, we have the classic two-dial instrumentation with a full 10.25" touchscreen in the center. They are compatible with Apple CarPlay and Android Auto, the wireless connection. The general ergonomics you find everything quickly. Something that is very functional, is that we find everywhere a collection of storage spaces and USB sockets. I find the cathode-style look on the radio very interesting. Do you remember the old TVs that used to be made out of vacuum tubes? It looks similar to those. 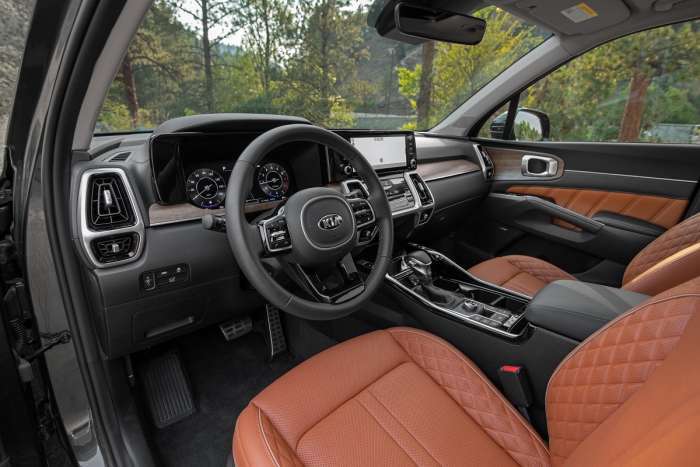 Heated and ventilated seats, sun visors in the second row, a heated steering wheel, ambient sounds provided by the multimedia system, all elements that are also part of the game. The equipment is complete.

When it comes to quality, it's generally good. The build quality also seemed decent to us. I think this vehicle will appeal to you because from the first kilometers, you can feel the increased rigidity and lightness of the chassis. It feels like the Sorento is smaller than it is. And the turbo engine does the job, seriously. The vehicle comes out of the blocks quickly and at 30, 50 or 70 miles per our it responds really well.

And all this is experienced in very appreciable comfort, coupled with good soundproofing. "In truth, looking for faults in the driving of the 2021 Sorento is an exercise that quickly becomes futile," writes Daniel Rufiange in Auto123. 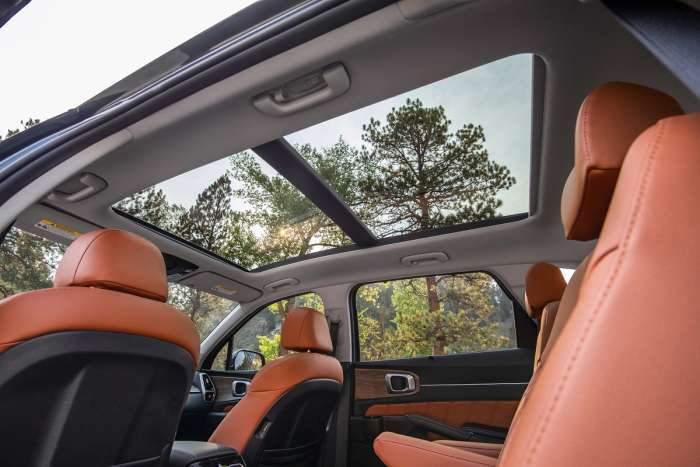 Kia delivers here a product that raises the bar when it comes to driving in this category. More stylish, clearly more modern and surprisingly efficient, not to mention practical and up-to-date technology, the 2021 Kia Sorento is on track to become the leader in its new category.

novaanna wrote on October 20, 2021 - 12:58am Permalink
This is a Nice Blog, Thanks For sharing your knowledge!! I replaced my outdated car engine with a Used KIA Engine. Now my cars performance is very smooth. I bought this engine from Autoparts-miles.com