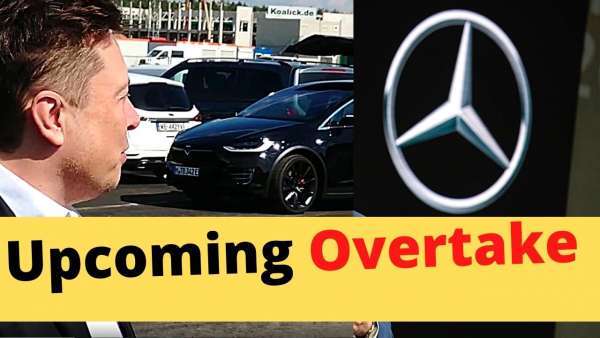 Tesla Will First Overtake Audi, BMW and Mercedes On Its Way To Global Auto Domination

Tesla starts to close in on German premium automakers. If things we with this speed within a year or two Tesla will first overtake Audi, BMW, and Mercedes on its way to overall Global Market Leadership.

"Individual brands will fall fast," writes Twitter user JPR007 and points out that "Porsche was already left behind some time ago."

TESLA STARTS TO CLOSE IN ON GERMAN PREMIUM AUTOMAKERS

Remember that Tesla will first overtake Audi, BMW, and Mercedes on its way to overall Global Market Leadership

Porsche was already left behind some time ago https://t.co/2enofjX2dR pic.twitter.com/AszRcMzdX8

In fact, considering all other manufacturers are loosing production & sales numbers at the same time Tesla is rapidly growing. I would expect BMW to fall far sooner than expected.

Thus, if the 2 new Gigafactories (Berlin and Austin) reach a total of 1.5mn, they are almost to BMW, but when they reach 2.5mn, they'll be behind Honda.

And this assumes they don't reduce any of the sales of gas-car makers.

In the meantime, Tesla has released huge numbers for Q4, 2021, handedly beating Wall Street expectations. Here are the details:

Tesla thanks all of their customers, employees, suppliers, shareholders and supporters who helped them achieve a great year.