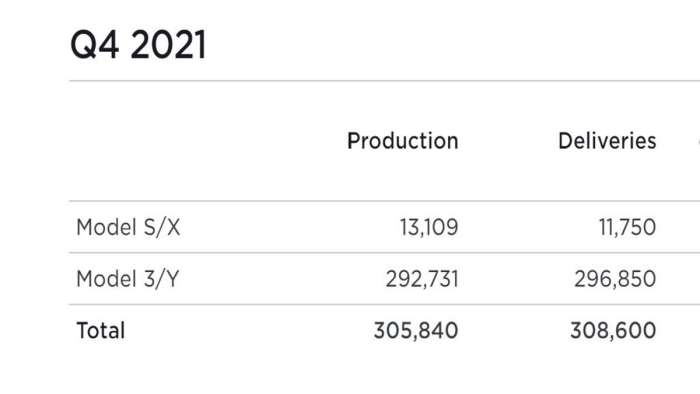 Tesla has just released their Q4, 2021 deliveries and production numbers. They are staggering, greatly exceeding what wall street thought would be delivered. Wall street was at 266,000. Tesla deliveries about 308,000. This is amazing.
Advertisement

We previously wrote about our prediction for Tesla Q4, 2021 deliveries and we were way too low with our prediction of 285K (which was still 20K higher than Wall Street)!

Tesla thanks all of their customers, employees, suppliers, shareholders and supporters who helped them achieve a great year.

I agree, it has been a great year!

This is unprecedented growth for a mega cap stock.

Tesla net income and cash flow results will be announced along with the rest of their financial performance with Q4, 2021 earnings in late January. Delivery count should be viewed as slightly conservative, as Tesla only counts a car as delivered if it is transferred to the customer and all paperwork is correct. Final numbers could vary by up to 0.5% or more. Tesla vehicle deliveries represent only one measure of the company’s financial performance and should not be relied on as an indicator of quarterly financial results, which depend on a variety of factors, including the cost of sales, foreign exchange movements.

What do you think of Tesla's Q4, 2021 delivery numbers? Is this going to raise the stock price?

DeanMcManis wrote on January 3, 2022 - 12:12pm Permalink
Well the big producer here was Tesla's Giga Shanghi factory, which ramped up production beyond expectations. And these numbers will climb dramatically later this year as the Giga Berlin and Giga Texas factories start up their production. Also hopefully the Cybertruck production will also begin in Texas later this year, and possibly a new, lower cost Tesla model from Giga Shanghi for the Asian and European markets as well. The future is definitely looking bright for Tesla in 2022.