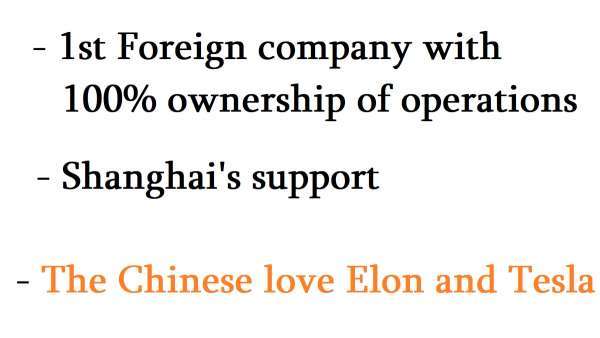 Tesla Should Succeed in China With These 3 Advantages

Millions of Tesla fans and investors are looking into Tesla China and wondering how the production of the made-in-China Model 3 will go. Will it be a success or no. In this video I will discuss Tesla’s 3 advantages in the Chinese market.

Several days ago there was an interesting panel discussion on Autoline Network in which Michael Dunne, an expert on the Chinese auto industry, and the CEO of a consultancy called ZoZo Go, shared his insights and warnings about what is likely to happen. According to him, Tesla has 3 main advantages in the Chinese market.

1st. Tesla is the 1st foreign company to be allowed to own 100% of its operation.

2nd. Tesla is in Shanghai, and Shanghai being such a large and prominent city will want to make sure that Tesla China is a success. This means that the government will make sure that they’ve got their plant built on time and they have everything working.

3. On top of this, all Chinese consumers really do like the Tesla brand and really admire Elon Musk.

As a result of all of these. You have got a premium market with two million units a year. You have the government wanting electric cars to succeed. And you have got a very strong U.S. brand in the country. So, they would be the one to bet on in terms of China.

Now, Tesla is part of the Chinese family for better or for worse. As some China automotive experts say, think of the Chinese government as the parents of Tesla who say, would you like to have this piece of candy? Then you should do these things and you will have your piece of candy. Now it’s a little of exaggeration, but not too much. The Chinese Communist Party has done an amazing job of harnessing the energies of millions of business entrepreneurs and foreign to innovate, to invest and to get things done. Thus, so far that formula has worked pretty effectively.

As of now, Tesla is actively hiring in these 4 major areas for it's Chinese Gigafactory 3.

Thanks for watching and listening. If this report was interesting, please Like it and comment what you think about Tesla’s work in China. How soon do you think the Model 3s will roll off the assembly line from the Gigafactory 3. Please, subscribe to Torque News Youtube channel and ring the bell so you may be notified when we upload our next news report about Tesla and the automotive industry in general. Have a blessed day.

I don't see any mention of one of the most important variables in US-China relations as of June 2019: the Chinese US trade war. Yet, I think in a lot of ways this is circumvented as the cars are not imported into China they are built there and sold into the local market without Tariff (to my knowledge).

Tesla open-sourced its patents not to save the planet but to save Tesla. Both domestically and globally, EVs need a critical mass to survive.